Recently, I re-published a series of articles in this blog dealing with the life and good works of Judge I.R. Kelso.

Of the many comments I received about the series, one question stood out: Was Kelso, Missouri, named for I.R. Kelso? The short answer is: No. Kelso, the town, was around a lot longer than Kelso, the jurist.

Even so, I made an unsuccessful attempt to link the Kelso family with the Scott County town. The latter went by several names before it received its current name. Edison Shrum, in "The History of Scott County, Missouri," listed them as Spring Hill, Vollmersville, Dannenmuellersville and Kelso.

The author of an article published in the Southeast Missourian on Oct. 20, 1954, implied the town may have taken its name from Edward Kelso, who was married to the daughter of one of Southeast Missouri's early residents, Abraham Byrd. 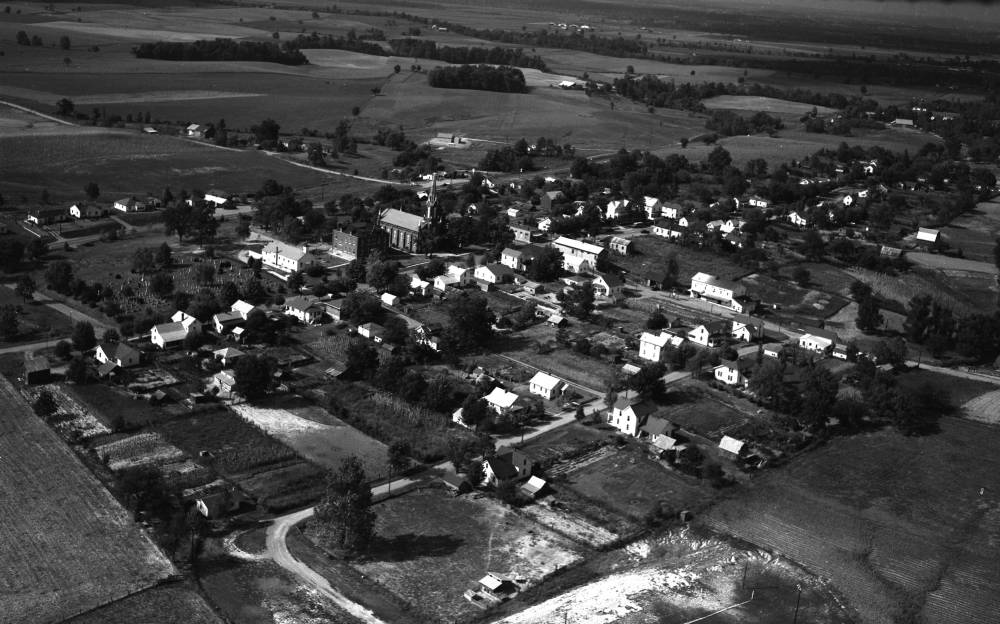 Looking to the northwest, this air view shows the town of Kelso, with St. Augustine Catholic Church and the school building in the center looming prominently in the photograph. Highway 61 is in the background. (G.D. Fronabarger ~ Southeast Missourian archive)

Special to the Missourian.

KELSO — Nestled among the hills of norther Scott County, along Highway 61, lies the little village of Kelso with its population of 300.

Kelso is unique in many respects. A settlement was started south of present location in 1862 and makes it one of the oldest in the county. Many of the settlers were immigrants from the Alsace-Lorraine region of France after the Franco-Prussian War of 1871. One of these, Kelso's oldest citizen, Gus Lux, now nearly 88 years old, who makes his home with his daughter, Mrs. Alvina Ressel, came over when he was 5 years old.

More than 95 percent of the population is Catholic. Their religious interests are centered around St. Augustine Church. The early inhabitants went to New Hamburg, whose church dates back to 1848, or to St. Vincent's in Cape Girardeau. In 1878 they began their own church and parochial school which was held in the present cozy and comfortable home of Mrs. Ed Menz, probably the oldest building in town. The present church building, was started in 1889 and competed in 1890. Most of the timber was donated by neighboring protestant families, the Ancell, Greer and Ellis families, who were more than glad to get the timber from their land in order to be able to cultivate it.

St. Augustine's, and one could proudly say Kelso's, leader, the Rev. Joseph F. Keusenkothen, came to Kelso in 1926 as the pastor's assistant and took over completely in 1940. The church today has a membership of 940 with 113 pupils in the parochial school under the guidance of four sisters. The stately church steeple may be seen for miles.

The present town was platted in 1883 with some minor changes on July 27, 18865. In the Plat Book No. I in the recorder's office in Benton may bee seen the names of those responsible for such endeavor. They Were C.B. Messmer, P.R. Williams, Charles Logel, Michael Welter, John Welter, Joseph Seyer, John Blattel, Lorenz Hoefler, Johnan Glueck, Charley Robert, Fritz Zachary and Cath. Thomas.

The writer is not too sure of where Kelso received its name and if there is someone who knows the definite answer, it would be greatly appreciated if they would come forward.

After research in Houck's "History of Missouri" and other sources, here are some of the findings: In 1779 Amos Byrd with his family came from North Carolina and i due time settled around what is now Byrd's Creek in Cape (Girardeau) County. One of their sons, Abraham Byrd, who became prominent in political life after the transfer of the Louisiana Territory from Spain to the United States, was the father of three sons and six daughters, all of whom married rather prominently. One of the daughters, Nancy, married Edward Kelso. Scott County was organized around Dec. 28, 1821. Soon after, the county court came into existence with two township, Moreland and Tywappity, already organized. By 1830 Kelso and Richland townships were formed. Edward B. Kelso was a judge of the County Court from 1852-1853. These people were originally from Scotland. It is from this group that I assume that Kelso received its name.

The town was incorporated in 1904. The first mayor was A.L. Drury. The first merchants were George C. Wright and A. Baudendistel. Charles Messmer, mentioned in (the) securing of (the) town plat, was an influential merchant earlier and the principal street which runs the full length of the town is known as Messmer Street. At the north end of this street live Mr. and Mrs. Louis Dannenmueller, now in their 80s. He was a mail carrier as well as a railroad worker in his earlier years.

A bank, known as the Farmers and Merchants Bank, existed from 1903 until February 1927. Dr. R.G. Williams, the father of the late Dr. Paul Williams of Cape Girardeau, was (the town's) first physician.

The Kelso Milling Co. was organized in December 1896. The first Board of Directors were George C. Wright, Charles Logel, Mike Welter, and Henry Hilleman. E.L. Welter started with the mill very early, became the manager in 1919 and the owner in 1937. Until 1942 flour was made, but at the present time it is strictly a meal and feed mill where much custom grinding is done for the farmers. A warehouse is still maintained at Ancell.

The Compas Store was started in 1907 by Peter Compas, now retired. It is now owned and managed by his nephew, Fred Burger, who took over in 1947. He is assisted by his son, Norman, and six other employees. It is said to be the most complete country hardware store between St. Louis and Memphis.

Lawrence Martin operates the blacksmith shop. There since 1932, he learned the trade from his father.

The well-known Joe Diebold orchard and dair4y is less than a mile south of town. The Monroe Raines dairy is not far away.

The history of the Kelso Red Buds, a softball team, dates back more than 10 years. In that time they have won six trophies in the parochial league. They won first in the S.E. Mo. League this year and placed third in state competition after three attempts. Jim Reinagel is their manager and Jim Schumacher, their president. The ball club is a civic project maintained by its more than 80 members in the Ball Park Association. They have one of the best lighted parks for night playing in Southeast Missouri.

In 1927 the Merry Jesters Dramatic Club was organized and each winter serves as a medium for the young people to show their talent.

The Kelso Homemakers Club with its membership of more than 25, under the leadership of their president, Mrs. Jack Smith, won first place at the Cape Fair with their display.

Fred Burger is serving his third term as mayor. The town board members are Dale Reeves, Andy Heisserer, Chester Enderle and Raymond Essner. 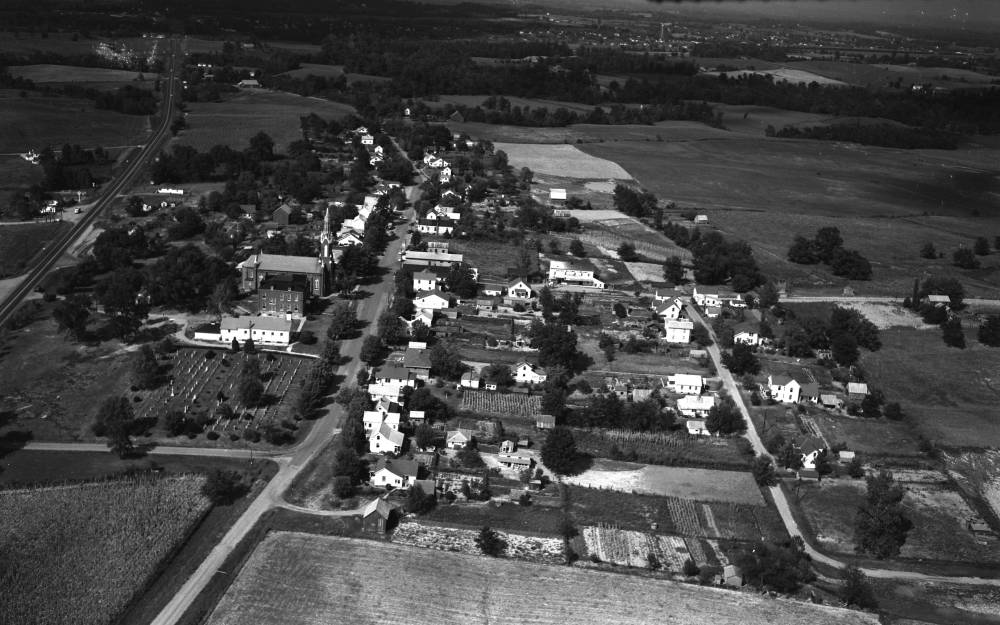 This aerial of Kelso was also taken in 1954, but was unpublished. (G.D. Fronabarger ~ Southeast Missourian archive)