In February 1968 officials with the Procter & Gamble Corp. announced plans to build a paper products plant north of Cape Girardeau. A day or so later, The Southeast Missourian newspaper carried a front-page article about the sleepy town of Neelys Landing, predicting that river town might soon see its third boom of the 20th century. 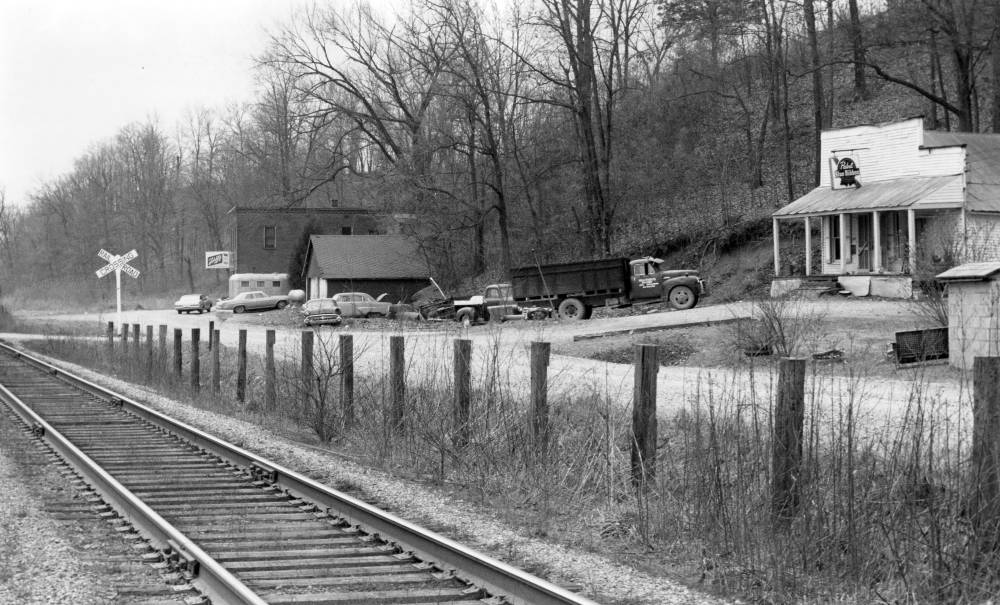 A boom at least twice in the past, the rail and river town of Neelys Landing now contains only one business, a tavern (center left). The town may experience a more permanent boom as a result of Procter & Gamble construction. The tavern at far right has been closed for two years. (Southeast Missourian archive)

NEELYS LANDING -- This Mississippi riverbank community located north of Trail of Tears State Park has grown up and died down again twice already in this century and apparently is headed for another period of expansion.

In the past it has boomed over cattle, farm produce, quarry operations and timber. The growth this time will be from construction of a paper products plant by Procter & Gamble just south of the community.

It is perhaps too soon after Procter & Gamble's announcement Friday that it planned to build on the 1,250-acre site for Neelys Landing people to have any definite plans to develop the community, but they are thinking.

Procter & Gamble plans to be in operation in 1969 if at all possible and will be hiring about 300 employees initially.

In visiting the community this week, one finds people thinking in terms of what services might be required for these employees, such as meals, services for automobiles, and during the construction state, the possible opening of rock quarries in the area.

At present, the only operating business in Neelys Landing is the Riverview Inn, a bar and grill-type business which features dances on weekends.

It is operated by Oliver Tripp, a native of the community who has spent most of his life on the river.

The Riverview Inn is located in the only two-story brick building in town. Mr. Tripp said through the years it has been used for everything from a hotel to a general store.

Neelys boomed the first time during the early 1900s reaching a peak about 1906. At that time it was a regular rail stop and river port.

There were three grocery stores, a restaurant, a blacksmith shop, warehouses, stockyard, grain elevator, and a post office.

The community was probably the most diversified at that time. Mr. Tripp said the railroad removed its water tower sometime after that and the community simply went down hill for a number of years.

In the early 1930s, the community boomed once again, this time mainly as a central point for work on the Mississippi River.

It was about this time that there was a concentration of work on the river by the U.S. Corps of Engineers. Quarry and timber products quickly became the lifeblood of the once-again thriving community.

It was during this time that Mr. Tripp remembers the community well. He said there was one grocery store that had a big hall upstairs. It served as a movie house most of the week, was used for dances on Saturday night and for church services Sunday morning.

Mr. Tripp said the community reached its peak in that expansion about 1936 before beginning the downhill trail once again

The Procter & Gamble announcement has not brought on prediction of another big boom in Neelys, but growth does seem inevitable.

With rail and river shipping of raw materials to the plant and the shipping of finished products out, the community will again become somewhat of a transportation center, but not like the past eras.

Instead, growth this time seems to be destined to be in the form of providing goods and services for employees of the plant and for families moving into the area as a result of the plant.

This winter, the community of Neelys Landing bears some resemblance of a western ghost town. If a person wants to see it that way, he would be advised to pay it a visit in the very near future.

In next week's blog, I'll bring you a history of the town written in 1949.