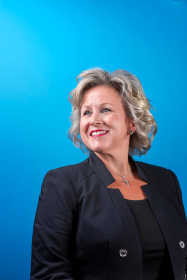 When Lisa Newcomer was a little girl, her mother worked at Saint Francis Hospital on Good Hope Street in Cape Girardeau and taught nursing at Southeast Missouri State University. Newcomer recalls "being the guinea pig" for nursing students as they checked her reflexes and temperature during pediatric clinics. She says the people her mother worked with became another family to her, and it was this that inspired her passion for health care.

Today, Newcomer serves as the service line director for cancer services and pulmonology and sleep medicine at Saint Francis Healthcare System in Cape Girardeau. In this role, she develops and executes strategic plans for primary and secondary service lines in order to provide system guidance and direction for achieving goals and objectives. She also collaborates with the medical director of oncology services, including a dyad for physician leadership and Cancer Institute leaders and staff to optimize care delivery functions. Through this, she works directly with approximately 156 individuals, although her actions touch many more lives even than that. She says she works each day to engage the hearts and minds of her front-line colleagues by explaining the decisions she makes so they understand procedures. She also leads by empowering the people around her.

"One of the things I tell my managers is, in my absence when you make decisions, if you think about the effect on the patient and the positive outcome, you'll never make a wrong decision," Newcomer says.

It's a quality about her leadership her colleagues notice, too.

"As a leader, Lisa possesses a broad knowledge and thorough understanding of the ever-evolving health care landscape," says Gerry Salter, MBA, PT, vice president of professional services of Saint Francis Healthcare System, to whom Lisa directly reports. "She serves her colleagues and our Saint Francis patients with the utmost dedication and brings that same passion to her community involvement. It is truly an honor to work with Lisa."

In addition to leading with a servant's heart, Newcomer has brought innovation to Saint Francis Healthcare System during her four years in her role: she was instrumental in bringing genetic counseling to the hospital so patients no longer have to drive to St. Louis or beyond for the service. Through the Zonta Club of Cape Girardeau, Newcomer knew Melanie Baxter, ScM, CGC, who now provides genetic counseling to people with a cancer predisposition at Saint Francis, teaching patients how to respond when they are faced with cancer.

Outside the office, Newcomer is widely involved in making her Cape Girardeau community a better place. She volunteers with Greyhound Pet Adoption and Big Brothers Big Sisters, is on the board of the Southeast Missouri Network Against Sexual Violence (SEMO NASV) and is a member of Zonta Club of Cape Girardeau and the Missouri Coalition for Cancer. She and her husband do premarital coaching at La Croix Church and sponsor a child through Mayan Families. She also recently achieved Fellow of the American College of Healthcare Executives (FACHE), which signifies gold standard board certification as a health care executive, formally recognizing Newcomer's competency, ethical decision making and commitment to health care delivery excellence. She says her family is her core, speaking highly of her husband Daniel of 30 years, their daughter, Kierra, their son, Caleb, and his wife, Megan. She and her family also have three dogs, two of which are greyhounds.

Born and raised in Cape Girardeau, Newcomer is proud to give back to her community in all of these ways.

"This community has given so much to me; it has given me so much support over the years," Newcomer says. "And working in this role, I feel like I am a servant leader, and I on a daily basis can give back to my community, the community that gave so much to me as I was growing up."