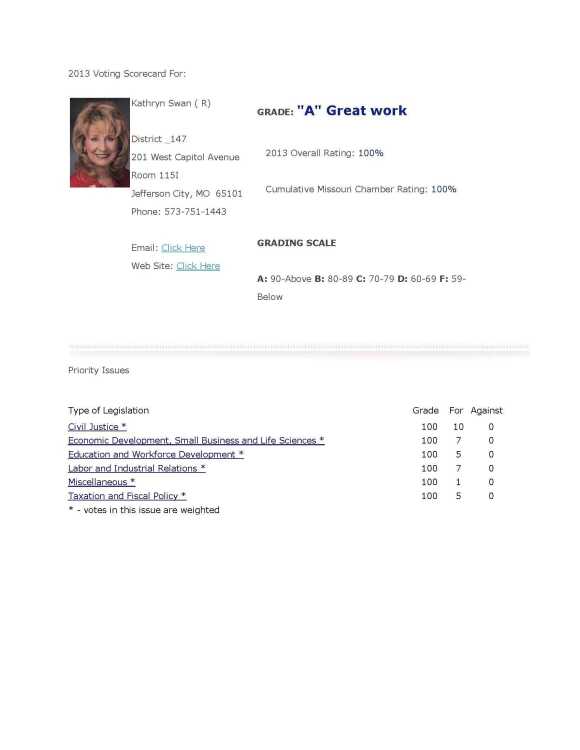 The Missouri Chamber of Commerce and Industry has released its 2013 Missouri Chamber Legislative Vote Record. This annual ranking provides the business community with a measure of how lawmakers voted on a comprehensive list of important economic issues in the regular 2013 Legislative Session and the 2013 Veto Session.

To compile this tool, the Missouri Chamber selected the most critical votes of the legislative session, weighed the votes based on their importance to Missouri employers, and established a rating for each Missouri legislator. The bills were chosen based on the Missouri Chamber of Commerce and Industry's legislative priorities, which are set by policy councils made up of business owners and executives from around the state. The priorities are then approved by the organization's board of directors. The votes cover a wide spectrum, including education, tax, workers' compensation, unemployment insurance, economic development, tort, employment law, labor and environmental policy.

"There were many important votes cast in the regular 2013 Legislative Session and during the Veto Session in September, providing lawmakers with a clear choice between supporting employers and workers versus bureaucrats," said Daniel P. Mehan, Missouri Chamber president and CEO. "This ranking gives us a strong tool to delineate which legislators are committed to protecting Missouri's business climate, and which legislators are working against that goal."

Seventy-three legislators showed strong support for Missouri's employers, ending the year with a 90 percent vote rating and above.

"These lawmakers made good on campaign promises to protect Missouri jobs," Mehan said. "Nine lawmakers went the extra mile to earn a 100 percent vote rating, voting in support of Missouri employers in every case."

While the 2013 Missouri Chamber Legislative Vote Record shows strong support by pro-jobs lawmakers, the report also shows disturbingly weak support on the other end of the scale. Seventy-seven lawmakers are failing Missouri workers and employers with a grade of 70 percent and below.

"We urge Missouri employers to use this tool to talk with their local legislators about their votes and why their positions on these jobs-issues are so critical to the economic health of our state. Most important, we hope they will use these ratings as a guide when visiting the ballot box in the next election," Mehan said.

The Missouri Chamber Vote Record demonstrates that elections matter and who Missourians are voting into office makes a difference in the economic health of our state.

For more information on vote records, contact Tracy King, Missouri Chamber vice president of governmental affairs, at tking@mochamber.com or by phone at 573-634-3511.