Afraid of heights? Don't read this 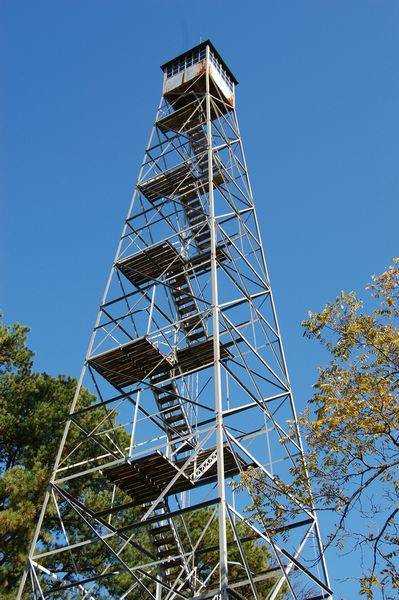 Thanks to the Internet, you can find a group devoted to any pursuit, no matter how small or obscure. Round barns, dance halls, road signs, glass insulators... you name it, somebody has built a website.

Fire towers would seem like a peculiar thing to research, even by Internet standards. But forget about research, the real fun is climbing one of these structures. Southeast Missouri still has a few lookout towers that are open for climbing, at least part way.

Last winter, during one of the rare days when the sun was shining between ice storms, I visited a tower in Perry County. At ground level, the weather was peaceful, but that changed when I climbed above the trees and found myself in a hurricane.

Well, not quite, but the sustained winds were ferocious. It was hard to hold my camera steady -- or hold it at all. The tower groaned and swayed under the wind, and groaned even more with every step I took. After a gust nearly knocked off my eyeglasses, I turned around and wasted no time getting off the tower. I quickly reached solid ground, but my legs and stomach were anything but solid. 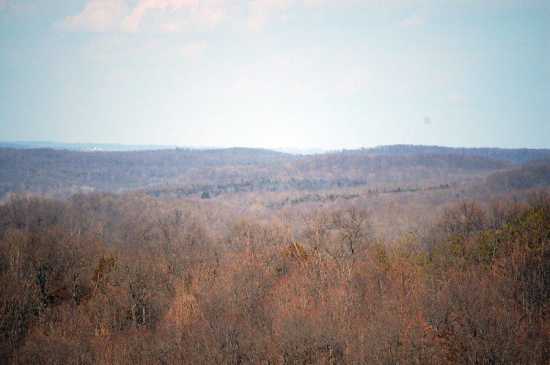 The view from Perry Tower

After that experience, why bother going to Six Flags? Just "ride" a lookout tower during a breezy day and you'll get your fix of heart-pounding action without waiting in line or emptying your wallet.

Here's a brief guide to some of the towers in Southeast Missouri:

Route J through Madison and Perry counties is a scenic backroad that makes for a pleasant alternative to Highway 72 for reaching Fredericktown. It features the Perry Tower, a 100-feet tall lookout tower next to the road. It's open to climbing, although ominous signs warn that climbing is "at your own risk" and only five people should use the tower at a time. 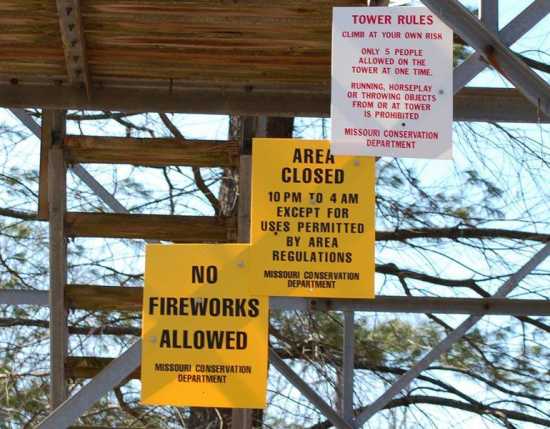 From Cape Girardeau, take I-55 north to the Old Appleton exit. Turn left on Route KK and continue into Bollinger County until the road ends at Highway 51. Then turn right on 51 and continue north for a short distance before reaching Route J. Make a left on Route J and keep your eyes peeled for the Perry Towersite sign on the right.

Located along US 67 between Farmington and Fredericktown, the summit of Knob Lick features a roadside park with rocky outcroppings and a panoramic view: 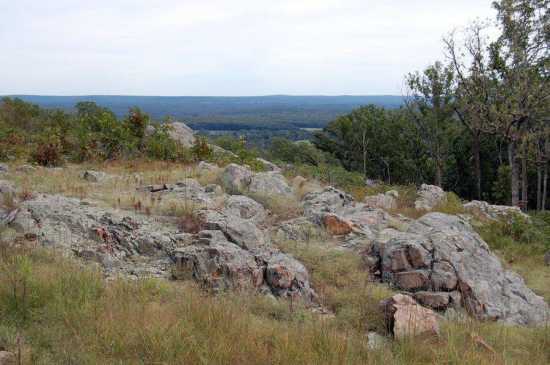 However, the view is even better from the fire tower at the peak: 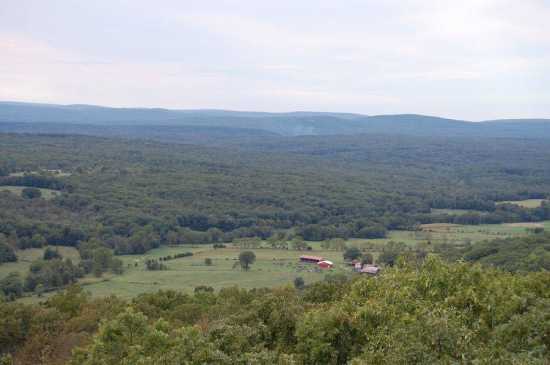 It's only possible to climb half-way up the Knob Lick Tower, but that's well above the tree line. 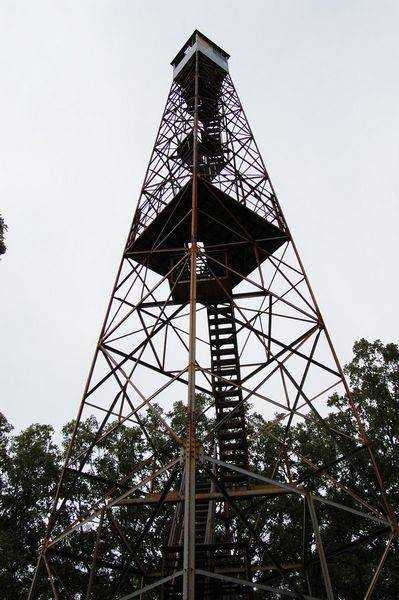 Driving directions: From the US 67/Highway 72 interchange in Fredericktown, take US 67 north for roughly 8 miles. Turn left at the intersection with Canterberry Road (look for the Knob Lick sign). Then make an immediate right on to Knob Lick Tower Road and follow the road to the summit.

What better place for a lookout tower than at Missouri's highest point? While the tower at Taum Sauk Mountain is actually located a short distance away from the highest point, that doesn't make the scenery any less spectacular. 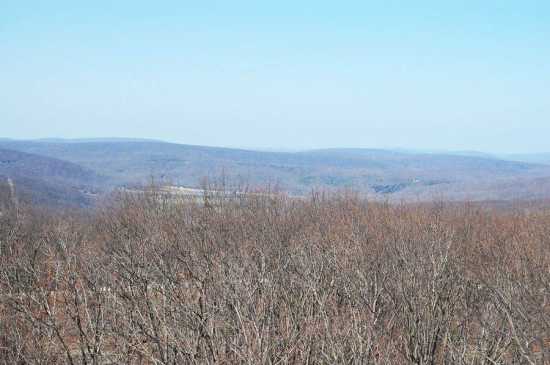 The view to the north features the rugged mountain peaks of the St. Francois Mountains, while looking southwest reveals the outline of the failed Taum Sauk Reservoir, now under reconstruction.

Driving directions: From Arcadia, take Highway 21 south to Route CC, and then follow this road up toward the summit of the mountain. At the entrance to Taum Sauk Mountain State Park, make a left to continue on Route CC for a short distance to the tower.

Bollinger County once had two fire towers, but a tower near Grassy is no longer standing. A tower south of Gipsy, however, still remains. 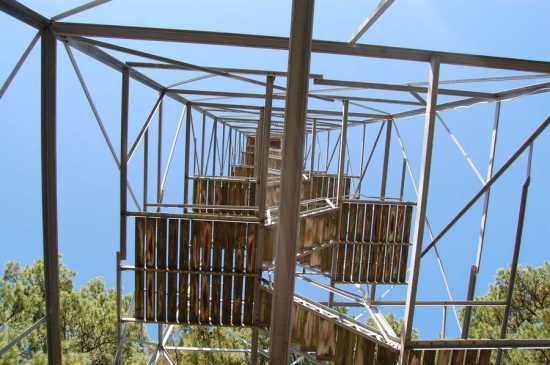 Many of Missouri's towers were built by the Aermotor Company of Chicago, a company that specialized in windmills and lookout towers. Gipsy Tower still has the original builder's plaque. 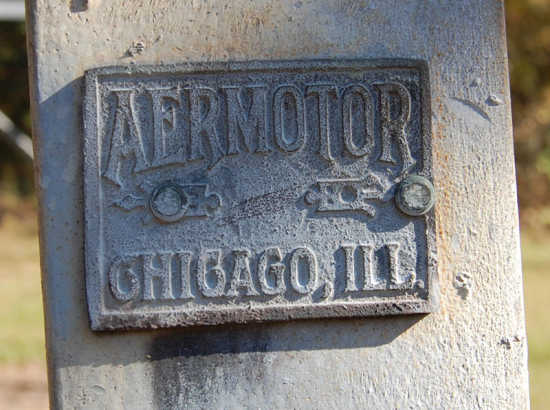 The words "Keep Off" can barely be seen in faded stencils. While the tower looks in decent shape, I didn't try to climb it.

Driving directions: From Zalma, take Route E west for three miles from the intersection with Highway 51. Turn left on Route TT and follow this road for 4.3 miles. Keep your eyes peeled for the tower on the right. After going a short distance past the tower, look for an unmarked gravel road on the right. Follow this road for a short distance until you reach the conservation area and tower.

The Forest Fire Lookout Association maintains a database of all known Missouri fire towers, past and present (257).