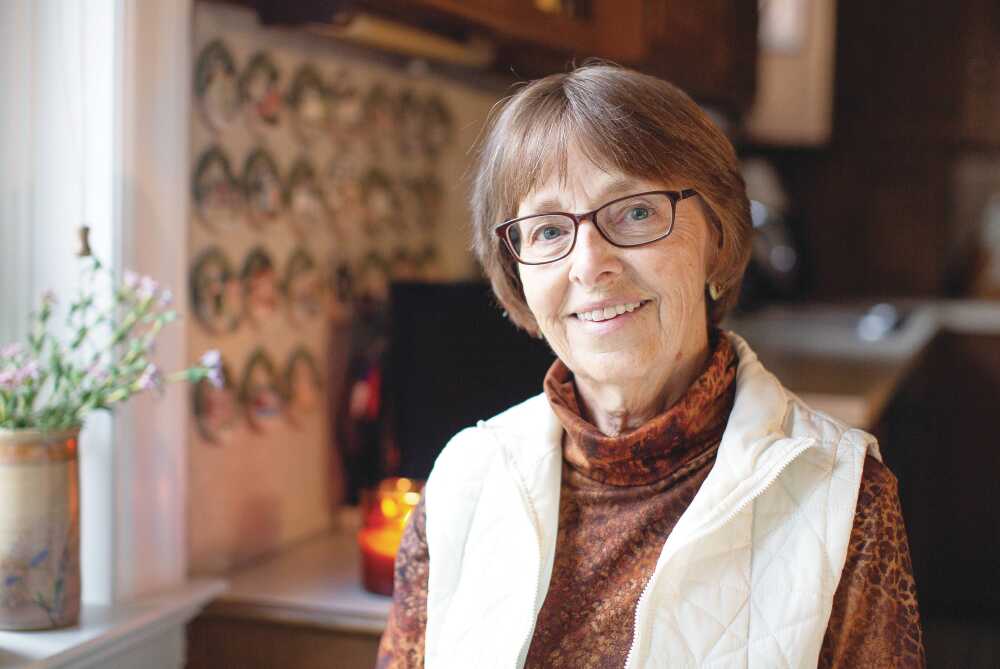 Bonnie Kippler has collected each of the ornaments released by Old Town Cape since they began the tradition in 1996.
Aaron Eisenhauer

Bonnie Kipper says she isn’t quite sure what keeps her collecting. Maybe it’s the joy it brings her or the thrill of adding one more piece to the puzzle.

She’s collected a piece of Cape Girardeau every year since 1996: a Christmas ornament, designed to represent a place significant to the town’s history. They’re part of the collection of ornaments Old Town Cape releases each year around the holidays to adorn locals’ and visitors’ trees.

Kipper says she hasn’t missed a year in the two and a half decades the ornaments — which are unique each year — have been released. She owns every ornament, from a miniature depiction of the Bill Emerson Bridge in 2003 to the Mississippi River Tales Mural in 2015.

“We have so many wonderful buildings in Cape that have different stories and different architectural interests,” she says. She admires the beauty of the distinct architecture of Cape Girardeau as the ornaments decorate her home.

She hangs the delicate ornaments in rows on a bulletin board in her kitchen so she can admire them year-round. Kipper admits she’s running out of room and is looking for a new location to display them in her Cape Girardeau home. An avid collector of holiday items, Kipper says she’s considering moving the ornaments to their own Cape Girardeau-themed Christmas tree.

When thinking back to when she first moved to Cape Girardeau from the east coast several decades ago, Kipper describes her initial awe of downtown. She loved the old buildings and the idea of a central hub; it reminded her of home. She grew up in a small town where Main Street was the heart of the community, something she says downtown Cape resembles.

This year, Old Town Cape introduced a new ornament based on the historic Iver’s Square in downtown Cape. The first ornament, launched in 1996, features the original clock and courthouse in Cape Girardeau. It’s one of Kipper’s favorites.

Old Town Cape assistant director Sarah LaVenture leads the annual ornament series and has overseen the project for the past three years. She says it began as a holiday fundraiser by the Downtown Merchants Association, led by Judith Anne Lang. When Old Town Cape merged with the downtown business’ group in 1999, the ornaments remained a Christmas tradition.

Each ornament is handcrafted and hand-painted by Hestia Creations out of Marblehead, Mass. Intricate details — such as delicate garland on the 2009 Glenn House — add a special touch to the Christmas collectables.

Yearly designs are created by Old Town Cape’s organization committee, one of the four volunteer-led committees at the organization. The process to create a holiday ornament starts in January with a discussion and photos of the landmark, LaVenture says. She’ll work with an artist year-round to ensure every scale photo, sketch and prototype fits the committee’s vision by the time it’s released in November.

If she could design an upcoming ornament, Kipper says she’d pick the new Common Pleas Courthouse downtown once it’s completed. She says she’s excited to see the building integrate into downtown Cape and says it would be a wonderful addition to her collection.

“The most rewarding part of this project is being able to capture places in Cape Girardeau that mean something to somebody,” LaVenture said.

She says it’s that personal connection to Cape Girardeau landmarks that makes the yearly ornament release so special. She often has conversations with the individuals who visit the Old Town Cape office to purchase ornaments, and she says many people choose an ornament based on favorite memories.

It might be a first date at Port Cape or memories of exploring downtown as a family; whatever the significance might be, LaVenture says they hope to capture it in an ornament.

“It really is a tradition that people from Cape really enjoy,” LaVenture says, noting that visitors also love to bring home the ornaments as a souvenir.

The ornaments are considered a collector’s item, and only 250 are available each year, LaVenture says.

Ornaments are available year-round at Old Town Cape’s office at 338 Broadway in limited supply. One ornament costs $25 or $30 with a stand. For more information, or to order an ornament to be shipped to your home, visit Old Town Cape’s website at http://www.downtowncapegirardeau.com/holiday-ornaments/.