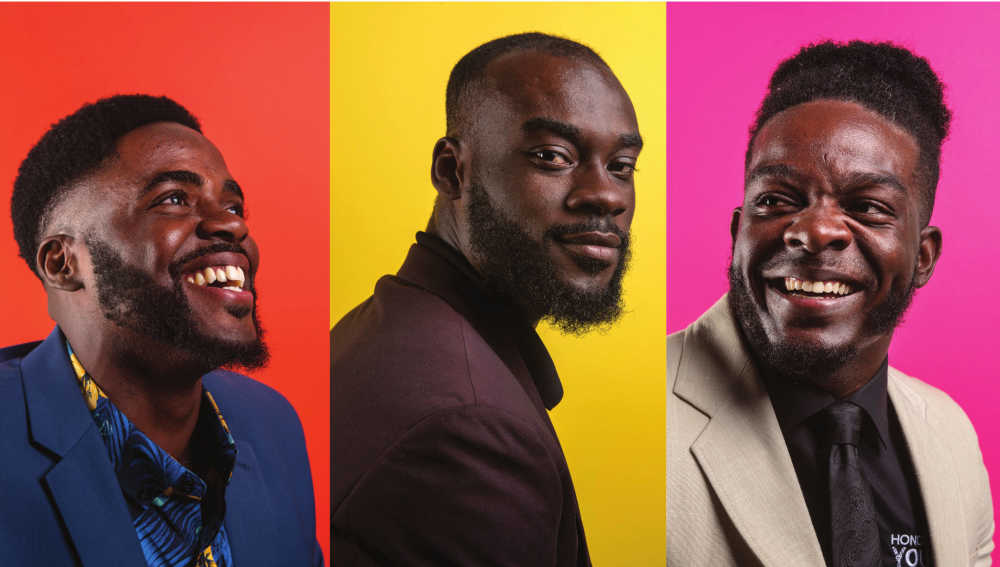 Four former Redhawks football players have captured a community's attention with their infectious attitudes and commitment to mentorship among Cape Girardeau's most at-risk students.

Aaron Adeoye, Cantrell Andrews, Kweku Arkorful and Wyky Jean knew they wanted to give back after college. They volunteered at the Christian Boxing Academy founded by Danny Rees. When boxing ended, they'd stay afterward to hang out with the kids. It was clear the kids could benefit from their positive influence.

In 2016, their involvement in the boxing program turned into voluntarily founding the Honorable Young Men Club at Cape Central Middle School.

"It wasn't something that was going to turn into this," Arkorful says. "It was just, 'Hey, we're leaving from our lunch breaks at work, we want to volunteer to help some kids out.' And it just literally transpired to this amazing thing that we have."

What they saw was a need among middle school students to have a mentor -- role models who would influence them in a positive way.

"We saw so many kids who just didn't have any role models," Arkorful says. "Kids that were getting in trouble and labeled. With us being African American males, it just didn't sit well with us."

He calls it a shift in perspective. What could they do to give back?

In 2016, the Honorable Young Men Club began with 39 students and has since grown to approximately 185 at its highest, with Andrews, Arkorful and Jean now all working full-time with the program. Adeoye, though still connected, is pursuing a career in the NFL with the Baltimore Ravens.

Andrews says after the first year of the program, more students who weren't necessarily at-risk wanted to be involved. Because of the increase in students who became a part of the club at that time, the founders realized they were not able to reach all of the at-risk students.

"Now it's by teacher referral," Andrews says. "[If] the teacher is seeing the kid is having an issue in the classroom and thinks the program would do them well, then she'll refer them."

The results show the program is working. Students in the club show improved attendance, decrease in suspensions and increased standardized testing scores, particularly with reading, writing and math.

Andrews attributes much of the success to the relationships built with each individual student and the mentors.

Arkorful uses the statement: "Before you can withdraw, you have to deposit in that love bank."

Those "deposits" come in the form of listening, encouraging words and handshakes. This camaraderie ultimately sets the tone for personal growth. When the time comes to correct a young man's behavior, the mentor has built a level of trust where the student knows it is coming from a place of love, Andrews says.

Of course, you can't miss the founders' shirts, ties and blazers. The club founders always dress professionally, oftentimes wearing full suits and ties. That is where it starts for the youngsters, too: each student is provided a dress shirt and tie. Based on their performance in the classroom and at the club, they can earn monogrammed polo shirts, a pen and, of course, the blazers.

But at the core, it's more than stuff.

"Those guys in the middle school, they cling to us," Arkorful says. "When they get the opportunity to become part of the shirt club ... it's different for them. For some reason, they're so hungry to be a part of something."

One of the most validating statements the mentors have heard came directly from the students.

"What's so cool is we've heard a few of our boys mention, 'Man, when I get done with college, I want to be a mentor one day.' I froze when I first heard that," Jean says. "I think that probably was one of the most relieving things I've ever heard from one of our boys, because they feel like it's valuable enough to them to say, 'Man, I want to do this when I get older because it's helped me."

The four football players know they're facing a different opponent now than on the gridiron. It's a spiritual battle -- with so many other influences, particularly in media, competing for youngsters' attention. Jean says there is a statement that's influenced how he sees his role: "Go out into all the world and preach the Gospel without words."

Jean adds that in Scripture, Jesus scolded his disciples who were trying to get the kids to leave him alone. Instead, Jesus said, "No, bring the kids here."

It paints the picture of the club: helping kids grow and succeed. It's an influence on the young men now, an influence the mentors hope propels them in the future.