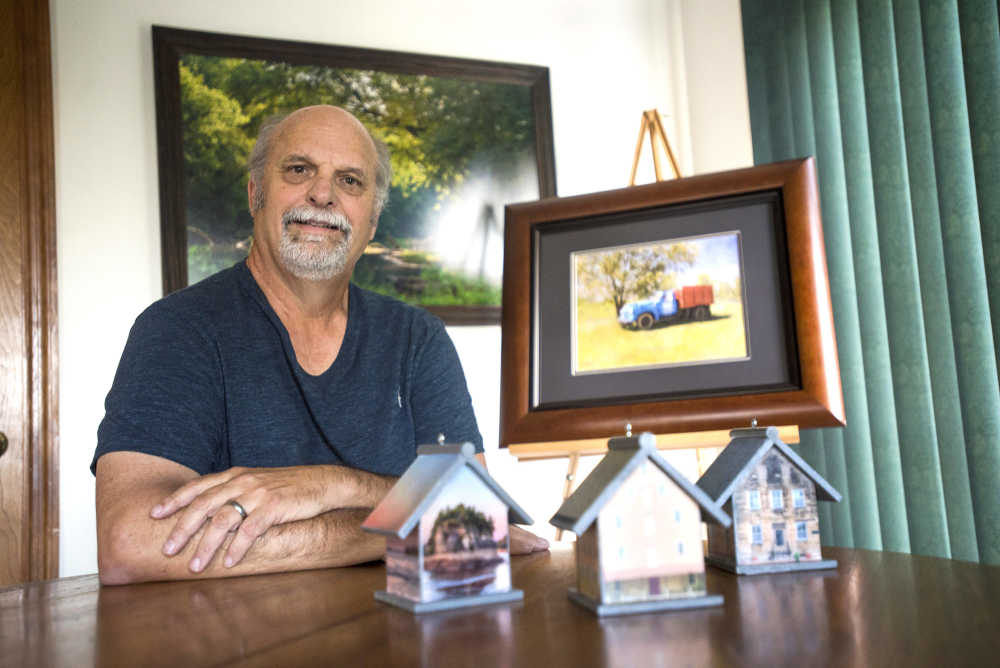 Larry Braun poses for a photo with three of his custom birdhouses and one of his digitally enhanced HDR photographs Tuesday, Oct. 2, 2018, at his home in Benton, Missouri.
Ben Matthews ~ Southeast Missourian
Order this photo

In the 1970s, Larry Braun could be found in the South China Sea, serving in the United States Navy on the USS Midway. The 66 - year – old Vietnam War veteran never wouldhave anticipated back then that four decades later, he would be a retired chemist with a love for digital art and photography.

Some of his first images, captured on film, were taken when the ship docked in places like Singapore, Japan, the Philippines, Korea and Hong Kong. He still has those images on slides, keepsakes of a different time. 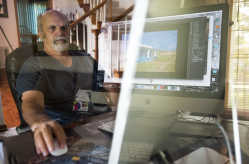 In this in-camera double exposure photograph, photographer Larry Braun is seen editing a photo of a Holcomb, Missouri, library at his home in Benton, Missouri.
Ben Matthews ~ Southeast Missourian
Order this photo

Back then, photography was a hobby, a way to document his travels and preserve his own memories. Now, it’s Braun’s way of capturing memories for others.

But before his first piece of art ever decorated the walls of banks or hospitals where many Braun originals can now be found, he would first have a long career in science.

After returning from his service, Braun attended Southeast Missouri State University, where he earned a bachelor’s degree in chemistry. He wanted a more stable way than photography to make a living and enjoyed science, so after graduation, he went to work for the New Madrid Power Plant. There, he spent 34 years working in performance monitoring.

And though a career as a chemist may seem like a far cry from the creativity and artistry photography provides, Braun says his time at the power plant gave him the freedom to be innovative and imaginative as he developed new programs to increase efficiency in the plant.

After his children grew up, Braun says he started hiking. It was through nature that Braun was reintroduced to his former love of photography. At first, Braun says his priority was the hike itself, and the photographs were just for fun. But once the camera found its way back into his hands, it wasn’t long before his love for photography became the reason for his hikes.

His art was quickly met with accolades such as a first-place finish in the 2008 Pictures by the People Photo Contest — his first award — and third place in the 2014 Strictly Digital Photo Contest from the Shawnee Hill Arts Council of Anna, Illinois. He says earning awards gave him confidence in his early days as an artist.

Now he’s a member of the Arts Council of Southeast Missouri, the Visual Arts Co-op of Cape Girardeau and the Ste. Genevieve Artist Guild. He has been published in various publications like the Architecture Digest, the Hometown Directories for Cape Girardeau and Sikeston and REI Castor River.

Though he dabbled in photography during the height of the print age, Braun’s creations are right in step with the digital world. Along with his photographs of landscapes, historic buildings and collection of counties throughout Southeast Missouri, Braun uses textures on top of his images to create digital artwork.

“There are some people that say, ‘When you take a picture, that’s what it is,’” Braun says. “For me, that’s a starting point. I take a picture and I ask, ‘Where can I take this?’”

Braun says he uses textures to bring his artistic impressions into the photo, as well as the feelings the image elicits for him, “like a painter.” He has about 200 textures with which he regularly works.

Much of his inspiration, Braun says, is drawn from artists like Edward Hopper, a 19th-century realist painter and printmaker, and Andrew Wyeth, a well-known realist painter of the mid-20th century.

These artists, Braun says, documented themes of the displacement of disenfranchised people during the era of industrialization. Through that lens, Braun draws parallels to his own work.

“In our day, though, it’s kind of like the computer age has taken us from each other,” Braun says. “Maybe I’m using the same theme in a modern perspective.”

Working as a full-time artist may not have been what he expected out of retirement, but Braun finds joy in creating art out of the ordinary.

The ability to connect communities through memories of the place they call home is what Braun says he loves most about his art. Sharing images that start conversations, especially on social media platforms, is how Braun says he sells memories “in bulk.”

Braun does his own printing for anything up to 12x18 inches. Any print job larger than that he takes to a printing company. Along with his unique production process, the artist sets himself apart by creating birdhouses that feature his images and postcard sets that contain images of entire counties in Southeast Missouri.

The market for art-infused birdhouses is small but growing, and Braun says he has sold more than 500 of them since he began the unique venture.

Whether Braun is more historian or photographer remains unknown, but it seems his passion for both go hand-in-hand. He has spent a great deal of time photographing and learning about historic places in the area, and those who purchase his postcard sets will find on the backsides factoids and unique bits of history about each county.

He’s also photographed every house in Cape Girardeau listed on the National Register of Historic Places.

“Nobody does what I do.” Braun says. “I took great landscapes, but [so did] a lot of other people. … So I started these historic buildings.”

Braun’s work can be purchased through his website, and many of his images are listed on Fine Art America. He also does presentations for groups or organizations, which gives him a platform from which to show off his work and teach the community the history behind his images.