Chicago has earned the reputation as the city that "votes early and votes often." And yet St. Louis hasn't been a paragon of virtue, either.

Or maybe not. The book History Saint Louis City and County (1911) notes that the census "was a fraud and delusion." The book quoted a report which compared business directories, school attendance records, and post office sales between the two cities. It was clear that Chicago was actually larger.

In Rails across the Mississippi, Robert Jackson writes that "certain St. Louis citizens, in their neurotic need to demonstrate their superiority over their rivals on Lake Michigan, had falsified the figures."

The year 1876 brought more shenanigans. Under the new Missouri constitution adopted the previous year, the city of St. Louis would be allowed to separate from St. Louis County, pending voter approval. City dwellers were happy for the opportunity to escape from the high taxes levied by the county government. A former St. Louis mayor accused the county of an "enormous, unjustifiable and scandalous waste of public money."

Since city voters outnumbered county voters by a wide margin (even with the inflated census numbers), it appeared that passage of the city/county split would be easy. But it was narrowly defeated at the polls. Proving that Chicago doesn't have a monopoly on election fraud, it was soon discovered that some of the ballots had been tampered with. The results were overturned and the "Great Divorce" was approved. The following year, St. Louis became an independent city while the county government was exiled to the small town of Clayton, barely a wide spot in the road.

It didn't take long for city residents to regret the decision. The city limits -- which seemed so generous at first -- were set in stone, preventing the city from taking advantage of future growth. As the city started bumping up against the limit, many attempts were made to reconcile the split, but no agreement could be reached. 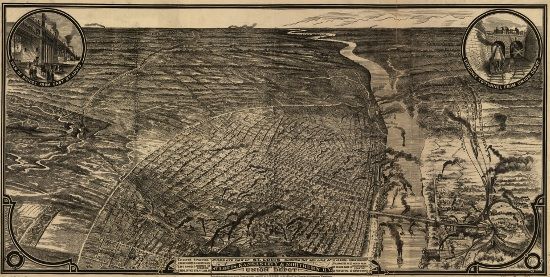 This "Bird's Eye" map of St. Louis from the time of the "Great Divorce" shows Forest Park as a wilderness area well past the edge of the built-up portion of the city. That didn't last long. (Image from the Library of Congress)

Back in 1876, however, the idea made sense. As a result of the divorce, St. Louis was the first city in the nation to enact a "home rule" charter, allowing the municipal government considerable freedom -- not just from county government, but also from state government. This was something Chicago didn't have. Buoyed by the achievement, and still giddy from the bogus census numbers, St. Louis promoters were dreaming big.

In the book A tour of St. Louis; or, the Inside Life of a Great City (1878), the authors made an incredibly bold prediction: "With a permanent channel of twenty feet in our Western rivers -- which will be secured within the next years -- the West will grow as if touched by magic, and St. Louis would leap into importance equal to New York or London in an almost incredibly short space of time. These results will be ultimately attained, and it is neither chimerical nor unreasonable to prophesy that St. Louis will be the greatest city on either continent within the next fifty years."

The city's optimism took a serious blow, however, when the Census of 1880 was unveiled. St. Louis had a population of 350,518, while Chicago had leapfrogged to an astounding 503,185 people.

One St. Louis newspaperman, Charles W. Knapp, tried to put a spin on the situation, arguing, "St. Louis shows more wealth, by nearly ninety millions of dollars, than the rival city. This may be, and is in great part, from lower assessments, but that lower assessment simply means that people in St. Louis own their property while Chicago is owned by money-lenders in New York, Boston, and elsewhere it the East..."

Knapp added this warning: "We are overloaded with high taxes, high money, high freights, and high labor. Rents are higher, food is higher, clothing is higher, and even fuel is higher than in either Chicago or Cincinnati, and so handicapped we cannot make a fair race." 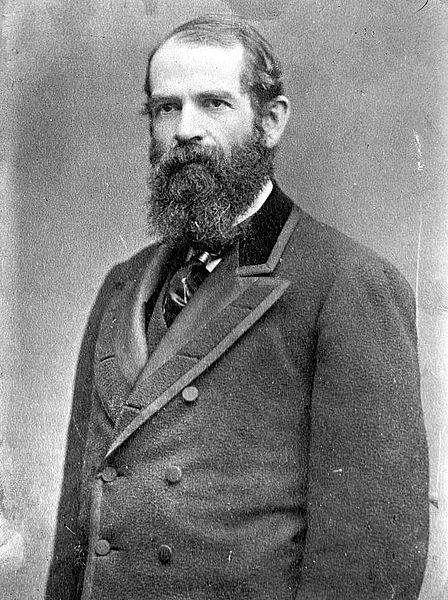 Portrait of Jay Gould (photo from the Library of Congress)

A key factor for these high costs was the difficulty in transporting cargo across the Mississippi River, the same problem that had been plaguing the city for over 40 years. The construction of the Eads Bridge had, despite bold predictions by the bridge builders, done little to solve the problem. After the bridge company sank into financial ruin, railroad tycoon Jay Gould was able to gain control of the bridge and tunnel in 1881 following a complicated series of business transactions.

Gould's involvement was a mixed blessing for St. Louis. He managed to cobble together a railroad network centered on St. Louis, something that the city needed to compete with Chicago. Robert Jackson argues, "Despite a reputation as the most predacious of all Gilded Age capitalists, Gould had become the leading force for development of St. Louis as a great rail center."

On the other hand, Chicagoans joked that the St. Louis railroads were merely branch lines feeding into their own city on Lake Michigan. When the Eads Bridge was dedicated, newspapers in Chicago called it the "Chicago & St. Louis Bridge." Poking fun at St. Louis was a favorite activity of Chicago writers, but they had a valid point.

Meanwhile, the bridge had failed to kill the Wiggins Ferry Company monopoly. To make matters worse, Gould's bridge was charging "arbitrary" rates for railroad traffic. To ship cargo across the river, St. Louisans had two choices: bad or worse.

In response, a group of St. Louis businessmen raised money to build a second bridge, dubbed the Merchants Bridge, that would offer cheaper transportation. The book History of the development of Missouri (1908) explained, "One of the conditions of the grant by the United States Government was a clause prohibiting its consolidation with the Eads bridge interests, but like many other good clauses, this was made to be broken."

The Merchants Bridge, completed in 1890, was built north of downtown, away from the stronghold of the Wiggins Ferry Company. But this bridge soon suffered the same fate as the Eads Bridge, falling victim to a mountain of debt. It was then absorbed into the Gould empire. 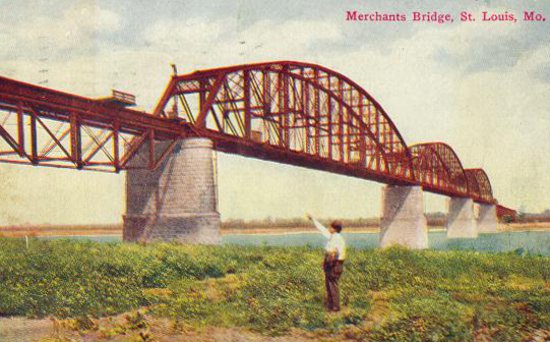 Postcard of the Merchants Bridge

Prior to his death in 1892, Gould had consolidated his holdings in St. Louis under the mantle of the Terminal Railroad Association (TRRA), a consortium of railroads that operated in St. Louis. The TRRA waged a prolonged battle with the Wiggins Ferry Company for dominance over the river. It was an ugly competition. One source claimed that the Wiggins Company "provided a barrel of free whiskey for those transfer drivers who patronized the ferry company."

Wiggins suffered a setback when many of its facilities were destroyed by a tornado in 1896. And yet, against all obstacles and predictions, the company would not die. It recovered from the tornado and still maintained a robust business at the turn of the century. Finally, the TRRA tried a new approach: joining instead of beating. In 1902, the TRRA was able to buy out the Wiggins Company through an intermediary.

But the elimination of the ferry company wasn't necessarily good news for St. Louis. Now the TRRA held a monopoly on all transportation across the river. Despite the best laid plans, the Mississippi River remained an obstacle instead of an asset.

Chicago, of course, was taking a commanding lead against St. Louis. According to the 1890 census, the Windy City had eclipsed one million residents, making it the second largest city in the United States. St. Louis was doing quite well, reaching a robust population of 451,770, but this was only good enough for fifth place.

St. Louis still had big plans to catch their rivals on Lake Michigan. Chicagoans, however, were more concerned about a different competitor: New York City, the No. 1 metropolis in the country.

All three cities lobbied hard for the privilege of hosting the World's Columbian Exposition, a celebration of the 400th anniversary of Christopher Columbus sailing the ocean blue. New York and St. Louis were both fuming when Chicago got the nod.

The 1893 exposition, covering 630 acres and featuring almost 200 new buildings, attracted an astounding 27 million visitors. Larger and more elaborate than any other previous world's fair, the event put Chicago on the world stage.

It was clear that St. Louis couldn't take this lying down. The city needed a comeback, an event so awesome that it would put Chicago to shame. That opportunity arrived in 1904.