What does Cape Girardeau have in common with a small town in Ohio?

When it comes to placenames, Cape Girardeau's town founder, Louis Lorimier, got the short end of the stick. Lorimier doesn't have much named after him: just a street, two cemeteries, and a school building that isn't a school anymore.

Meanwhile, Jean B. Girardot, who had only a fleeting connection to the area, got lucky as the namesake for the whole town, plus the county. History can be so unfair.

Lorimier, however, hasn't been completely ignored by mapmakers. He does have a town named after him, just not in Missouri.

The town is Fort Loramie, Ohio, located north of Dayton in Shelby County. 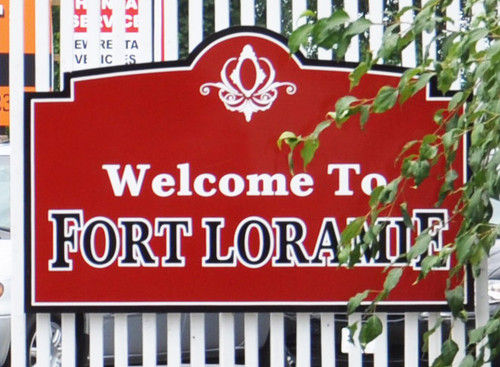 Americans have always had trouble spelling French names. We couldn't get Girardot right, and the Ohioans couldn't get Lorimier right. Despite the weird spelling, the Lorimier/Loramie name is all over the town.

It's the name for a creek, a lake, and a state park. 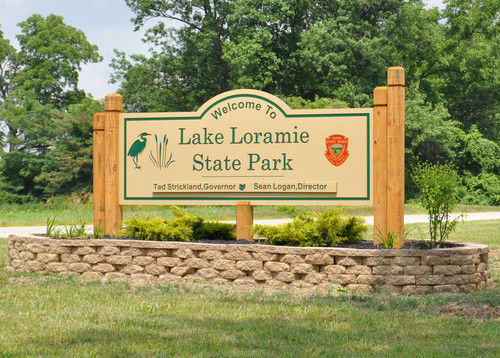 It's the name for a school district, complete with politically-incorrect Redskins mascot. 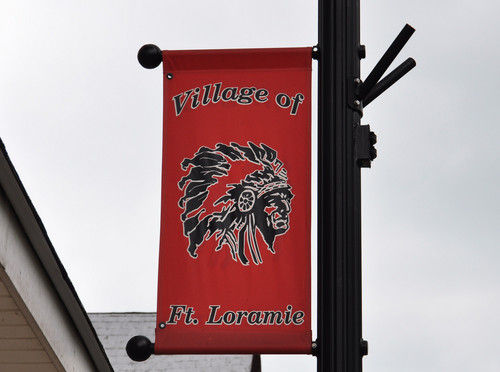 It's also the namesake for a hardware store, which, like many of the storefronts on Main Street, looks like a slice of Mayberry. 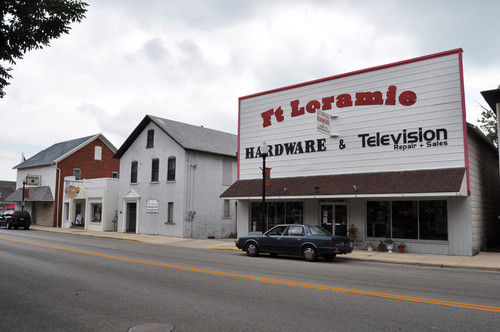 The modern-day town of Fort Loramie dates to the 1830s, when it was settled by German immigrants. The Loramie name, however, is much older.

In 1769, Louis Lorimier and his father established a trading post just north of the current town. Louis, also known as Peter or Pierre during this time, was apparently quite successful at trading with local Indian tribes.

Lorimier had a good thing going, but it was threatened by Americans encroaching from the east and trying to drive the Indians out. Soon Lorimier found himself on the wrong side of the Revolutionary War. Louis Houck writes that Lorimier's store was "the center of Indian and British intrigues, and many Indian foraging expeditions were equipped there."

According to Houck, Lorimier joined forty Shawnee and carried out a raid into Kentucky in 1778, kidnapping Daniel Boone in the process. Boone was taken to the Shawnee village of Chillicothe where he later escaped.

The Americans, of course, weren't too keen on Lorimier's activities. Gen. George Rogers Clark dispatched Col. Benjamin Logan to take care of the problem. Logan's troops burned Lorimier's store to the ground in 1782, forcing him to flee with his life. Various estimates put Lorimier's losses at anywhere from $20,000 to $70,000. Regardless of the exact amount, Lorimier was financially ruined.

Lorimier reportedly fled to a safe haven at Wapakoneta, Ohio, before moving west to seek a new life in Indiana. Not much is known about his activities in Indiana, but it appears that he racked up a bunch of debt. He then moved to Missouri and enjoyed better success, soon regaining his financial standing. By 1793 he came to a place called Cape Girardeau; we all know the rest of the story.

Meanwhile, back in Ohio, the Lorimier/Loramie name had stuck, despite his exodus. The site of Lorimier's store was at a strategic location along a major trade route between the Ohio River and Lake Erie, a route that would later become a canal. The location occupied a stretch of high ground, called Loramie's Summit, that was the highest point along the route and required a portage between two rivers. 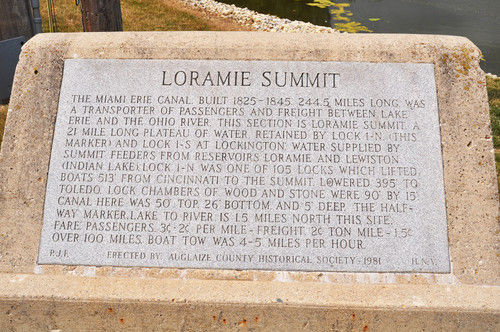 This historic marker in the nearby town of New Bremen explains the significance of the local geography.

In 1798, taking advantage of the strategic location, General Anthony Wayne ordered the construction of a fort here. The fort became known as Fort Loramie, a rare example of a fort named after a former enemy!

After the fort was abandoned, a town eventually developed near the site. It was first called Berlin by German immigrants, but the name didn't stick. Before long the town reverted to the old name of Fort Loramie. With its position on the Miami and Erie Canal (completed in the 1840s), the town thrived. 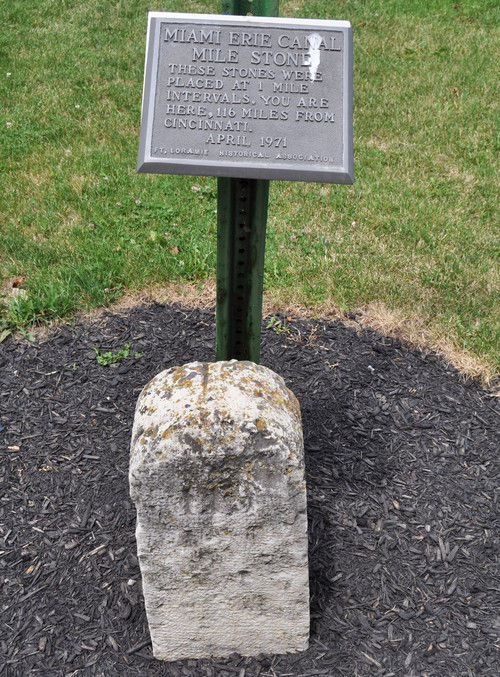 A small park in the middle of Fort Loramie was built on the remains of the canal. It includes this stone mile marker announcing the distance (116 miles) to the canal's terminus at Cincinnati.

By the beginning of the 20th Century, the dominance of the railroads put an end to the canal, which was finally wiped out by a catastrophic flood in 1913 and never rebuilt. Since then, Fort Loramie has remained as a small but pleasant town with a population around 1,300. 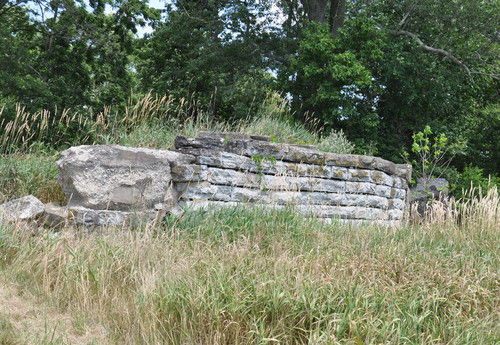 This stone abutment was part of an aqueduct that carried the canal over Loramie Creek.

A restored portion of the canal passes through the nearby town of New Bremen.

The site of Lorimier's store is said to be located on a farm north of town. Just beyond Loramie Creek, a driveway leads west from Highway 66 to a farmhouse and barn surrounded by cornfields. Lorimier was here somewhere: 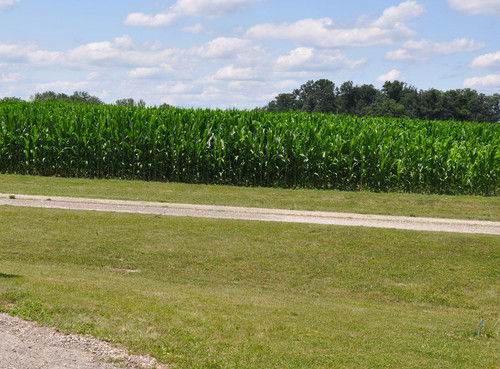 Despite Lorimier's checkered past, he did play roles in the histories of both Ohio and Missouri. How many towns can boast of a town founder with such a colorful history? This is the kind of story, especially the part about kidnapping Daniel Boone, that would make excellent fodder for a novel or movie. So what if our town is named after the wrong person?