Most Sundays, my siblings and I get together for a meal. It's a tradition that started when our parents were alive, and we've continued it. We take time out to discuss the happenings of the previous week, review the schedule for the coming week, and generally solve all of the world's problems.

At a recent luncheon, the topic turned to Big Foot sightings. A television program was showing what it claimed to be a video of a Big Foot somewhere in the United States.

To tell you the truth, I didn't pay much attention, until Big Sis and Big Bro began debating the authenticity of the ape-like creatures. Like Switzerland, I remained neutral.

But days later, while compiling the Out of the Past column, I ran across an article from 1947 that announced there was a big "varmint" hiding in the hills of Madison County, and residents thereabouts were determined to hunt it down.

I did a little more checking and found a second article from 1972 that interviewed the same man who had been featured in the '47 story: George Slocum. Now, I know this doesn't prove anything, but the two articles might provide interesting fodder for our next family get-together.

Special to The Missourian.

FREDERICKTOWN, Sept. 8. — Although law enforcement authorities were taking a cautious view of the entire situation, residents of the nearby Boswell community are remaining steadfast in their belief that an "ape-like" animal is on the loose in the rugged Ozark hills near here.

They point, as proof of their contention, to huge footprints in the peach orchard of George Slocum, where the "thing," "varmint" or "ape," as it is variously called, has been particularly frequent in its visits. Mr. Slocum, a piano tuner, formerly lived in Cape Girardeau.

A plaster cast of one of the prints has been made and, displayed at the office of the Democrat-News here, has drawn the attention of hundreds of persons.

Slocum's daughter, Agnes, 10, reported seeing the animal, which, she described, was like an ape she had seen at the zoo in St. Louis. Hunts have been arranged and John Lute and his son, Gene, of near Fredericktown, have reported seeing and shooting at the animal. They said it was brown with white or grey markings on the head.

Besides the footprints in the Slocum orchard, many more have been viewed by parties hunting the animal in a hollow near the farmer's house.

Even though the hunters have not been successful in capturing the mystery animal, Carl Lamb, Ernest Thurman and James Royer last week killed a 28-pound bobcat with a .22 caliber rifle when their pack of hounds jumped the feline, but it wasn't the "ape." 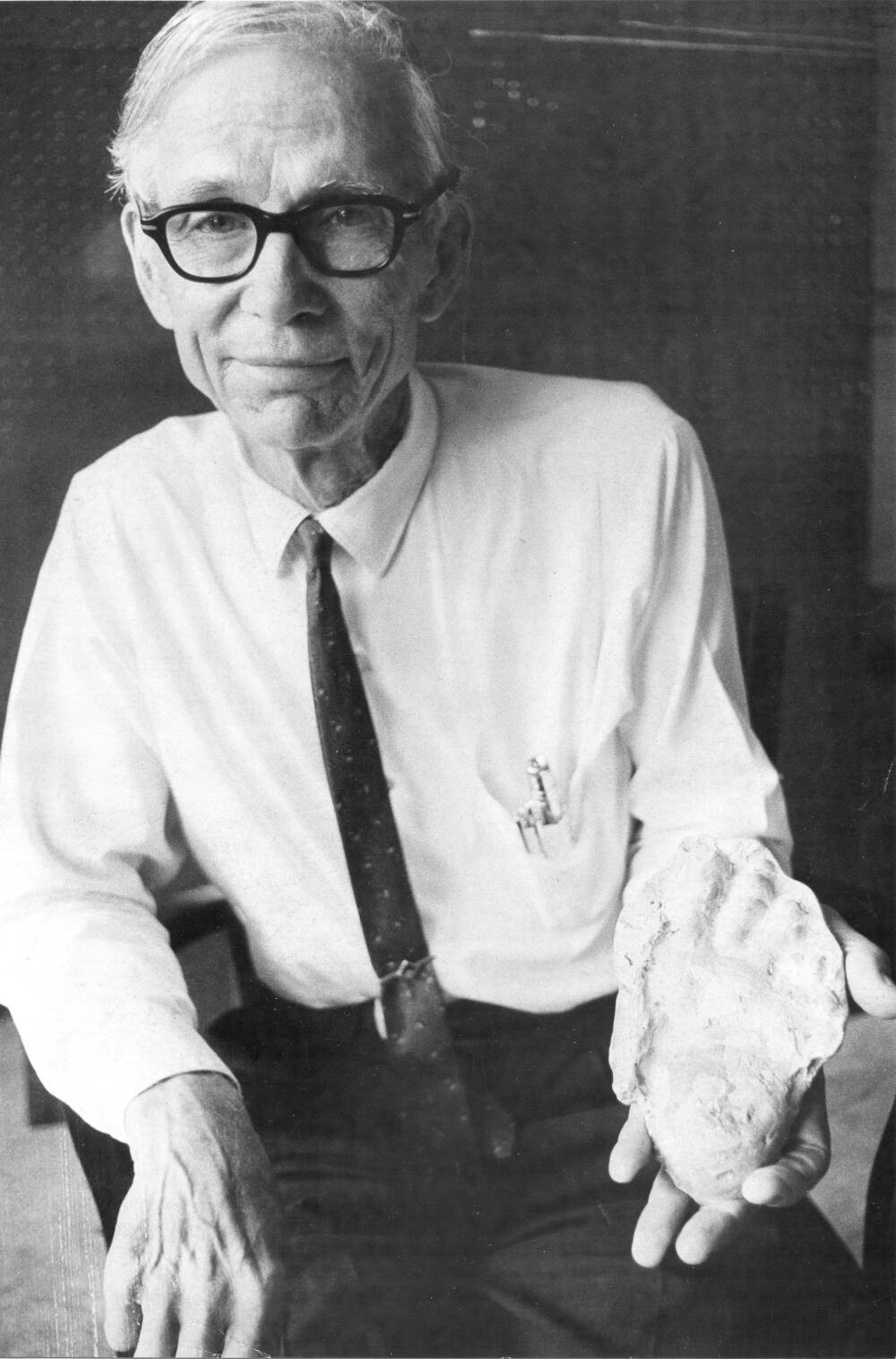 George Slocum, 72, a Jackson piano tuner, displays the cast of a footprint of the Baby Mo-Mo that roamed his farm near Fredericktown, Missouri, in the late 1940s. (Southeast Missourian archive)

IS MO-MO DESCENDANT OF FIVE-TOED MONSTER
SIGHTED IN FREDERICKTOWN IN '40s?

Mo-Mo could be mo' of the same old family — a descendant of three foul-smelling, long-armed Missouri monsters that stalked the hills and dales around Fredericktown 26 years ago.

If so, he, she or it has lost two toes in the shuffle.

George Slocum, now of Jackson, says he became almost familiar with the three creatures that threw a scare into Southeast Missourians in 1946-48. The "things" practically took up residence at the Slocum farm eight miles southwest of Fredericktown.

There were at least three of the hairy beasts at that time — apparently Mama Monster, Papa Monster and little bitty (?) Baby Monster.

Mr. Slocum said he saw them, his late wife saw them and their daughter saw them. To prove it. Mr. Slocum has a plaster of Paris cast of Baby Monster's footprint. It is 4 1/2 by 6 1/2 inches in size and it has five toes.

But the hairy creature now being seen around Louisiana, Missouri, is reported to have only three toes, Mr. Slocum said.

However, it's possible Baby Monster could have grown up. Or some of its relatives could have moved to Louisiana. It's a known fact that many hunters came to the Fredericktown area in hopes of adding an unusual prize to their trophy wall, but none were successful.

"I know there was a family of at least three, we could hear them call to each other. It was a high-pitched 'o-o-o-h' call, and they would answer one another," Mr. Slocum commented.

Mr. Slocum said he also found a large footprint about three or four times as big as the smaller one, but couldn't make a cast of it.

"My wife saw it walking through our chicken yard on two legs and its hands were so long they hung below the knees. It was hairy and we found some of the black hairs in the fence where it crossed over. It slept in our brooder house, because the odor was there and it was pretty strong," Mr. Slocum recalled.

His daughter also saw one of the things come out of a creek. It was on all fours and had a large tooth protruding from each side of its mouth. "She was only 12 and scared to death," he commented.

Mr. Slocum's theory is that the 1946 creatures were at least a type of what is called "Big Foot, Yeti or the abominable snowman." Webster (dictionary) says the latter is an animal reported as existing in the high Himalayas and usually thought to be a bear.

"A professor who studied the cast of the footprint said it is not a human print, but the joint of the second toe has human characteristics," Mr. Slocum stated.

Apparently Mo-Mo of yesteryears "grubbed" for food and didn't bother anything on the farm. "And a strange thing was that you never found any footprints of the creature in the winter, only in summer," he said.