The kind of war we would welcome

In these days of high inflation and inflated prices at the pump, who wouldn't enjoy seeing a gas war?

Youngsters -- those of you who have only been driving a few years -- may not familiar with this concept. One filling station will drop its prices a few cents and, not to be outdone, a station up the street will do the same. And the price per gallon of gasoline sinks lower and lower, much to the delight of drivers.

In 1972 the opening of a Saveway Service Station at Broadway and Houck Place kicked off a good old-fashioned gas war. An article was published sans photographs, although about half a role of film was shot at the Saveway and the U-Pump stations mentioned in the article. The photographer is unknown. 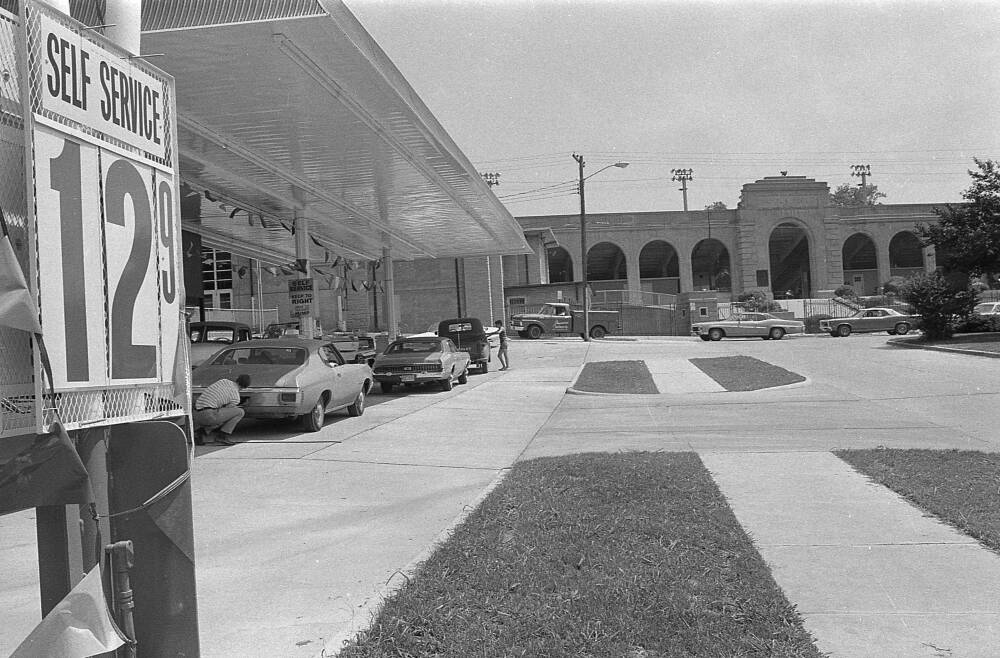 A line of cars in front of Houck Stadium waits to fill up at the just-opened Saveway Service Station, Broadway and Houck Place, in July 1972. At 12.9 cents per gallon, the owners of the new station sparked a gas war with a U-Pump Station at Pacific and Independence streets. (Southeast Missourian archive)

Hundreds of motorists, some waiting in line as long as 20 to 30 minutes, flocked into two self-service filling stations here today to pay the lowest gasoline prices conceivable.

Most left wishing the tanks of their cars were only bigger.

A gas war like Cape Girardeau has never seen was sparked by the grand opening today of a new Saveway Service Station at Houck Place and Broadway. The U-Pump Service Station, Pacific and Independence, quickly followed suit after Saveway announced it would start selling regular for 21.9 and 23.9 cents this morning.

At times this forenoon, traffic at Broadway and Houck Place was extremely congested because of cars lined up to get to the station's pumps.

When Mr. Melton was informed by a Missourian reporter that the price at Saveway was at 12.9 for regular, he said he would contact the general manager of the station and request that it, too, drop to the lower price.

Ironically, Standard Oil dealers here received word shortly before noon to raise its prices from the present 30.9 for regular to 35.9. One station owner said, "We won't know until tonight whether we will drop it or not."

Major dealers did not reduce prices during today's gas war. Independents with attendants to pump gas dropped from 28.9 to 23.9 for regular early this morning. Another drop placed most independents at 21.9 at noon. One independent station manager said he would go no lower. 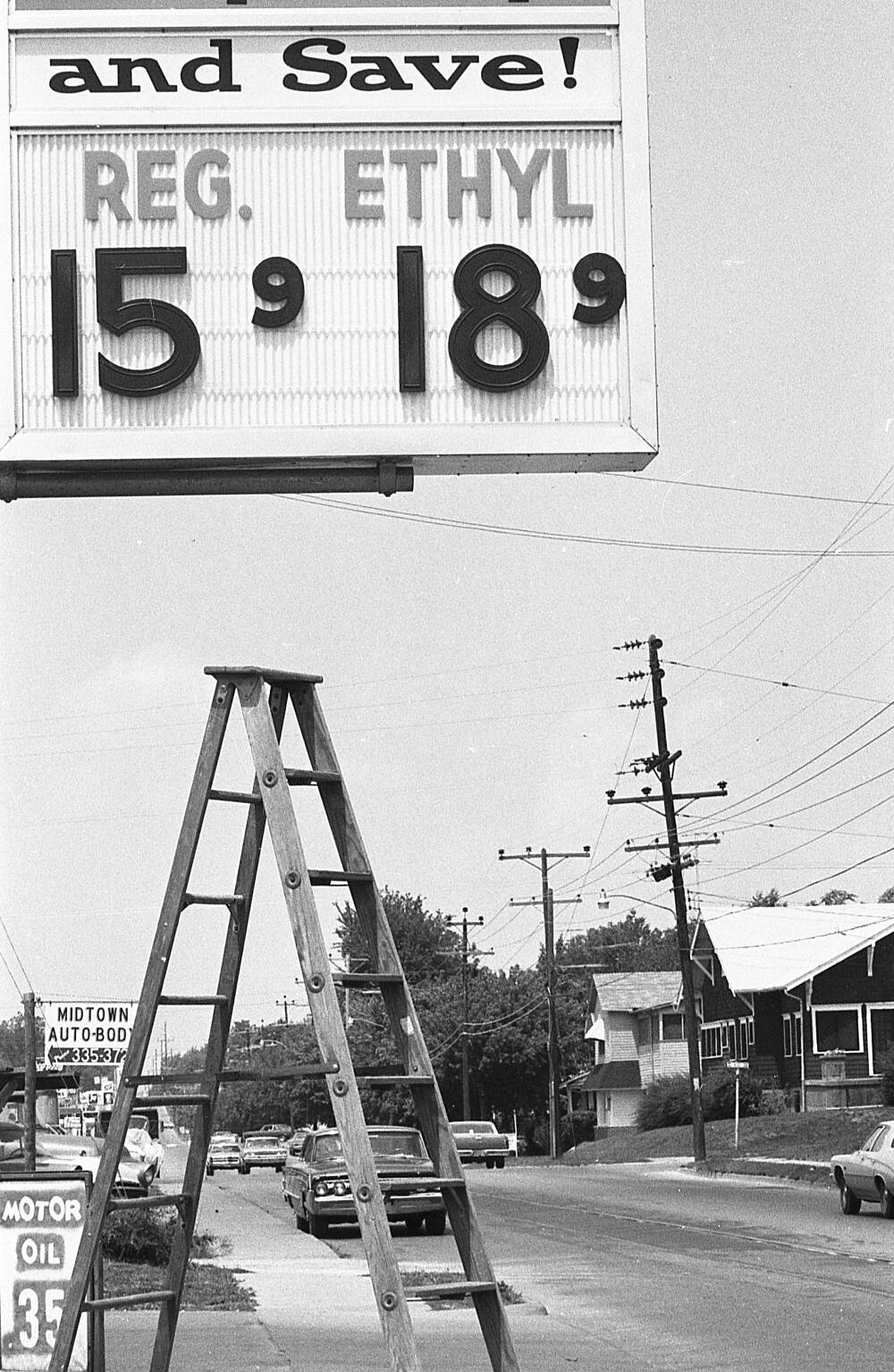 Operators of the U-Pump Station at Independence and Pacific streets took up the challenge to match Saveway's gas prices. (Southeast Missourian archive)

Saveway Oil Co. closed the service station on Broadway in 1985. The following year it was listed in the Cape Girardeau city directory as McBride's Self Service, and from 1988 through 1990, directories listed it as Fast Lane Fast Gas. From 1991 through 1996 it was a convenience store: Stadium Food Plaza.

In August 1999, Robert and Dana Jenkins of Sikeston, Missouri, donated the store and property to Southeast Missouri State University Foundation, a gift valued at the time at $170,000.

In accepting the donation, Southeast President Dr. Kenneth Dobbins was quoted by the Southeast Missourian newspaper as saying, "We express our heartfelt thanks to the Jenkins for their generous gift-in-kind. This property will help the university in enhancing the look of Houck Stadium and Field House. We will use this site to landscape around the entrance to Houck and to showcase the stadium and its south entrance."

The building was razed and the property converted into a landscaped parking lot.

Here are a few other photos of the Saveway station from its its opening in July 1972. The photographer isn't known. 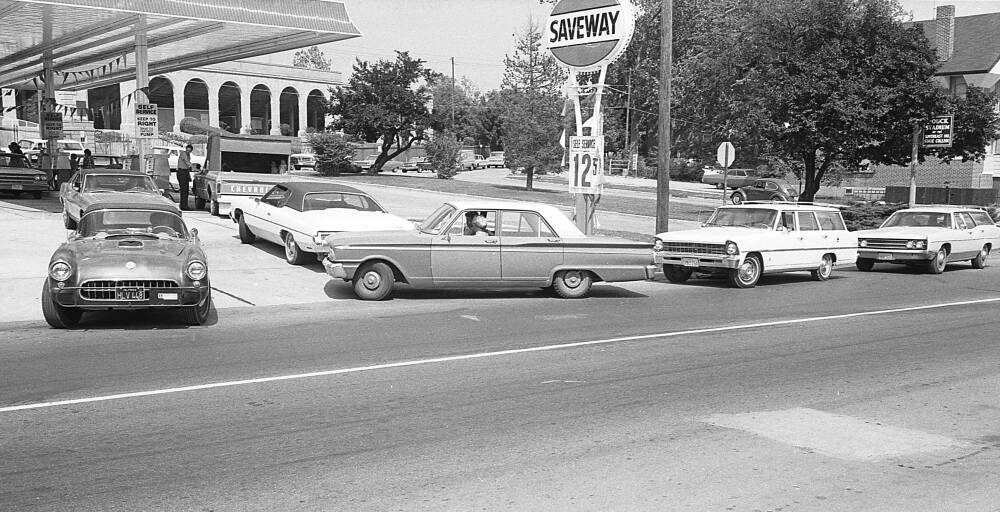 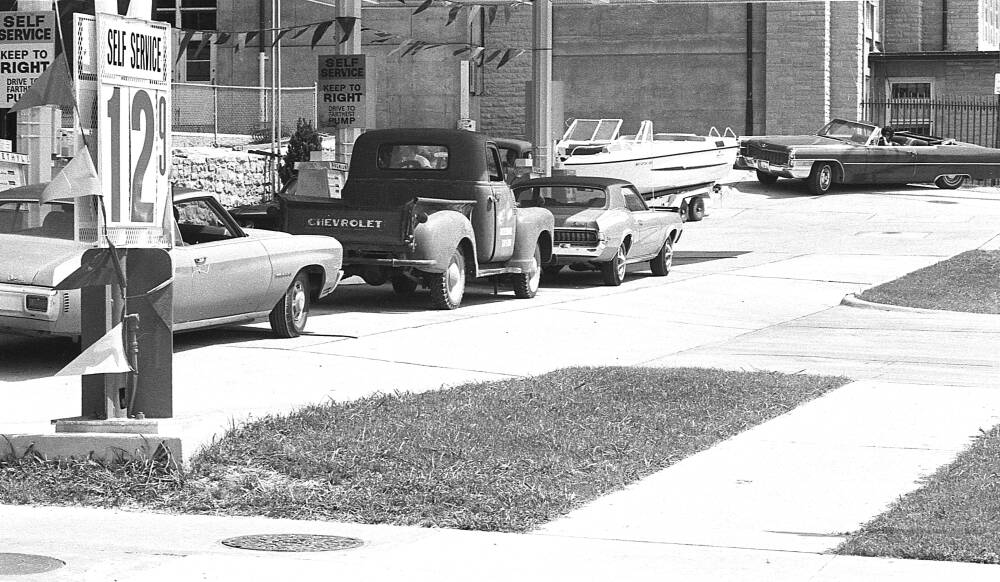 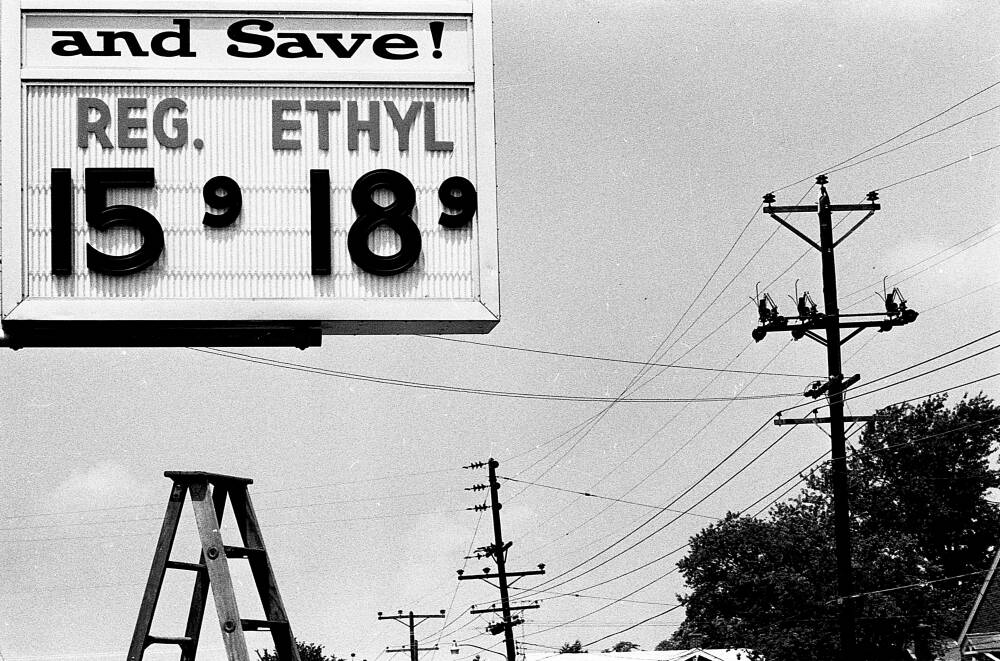 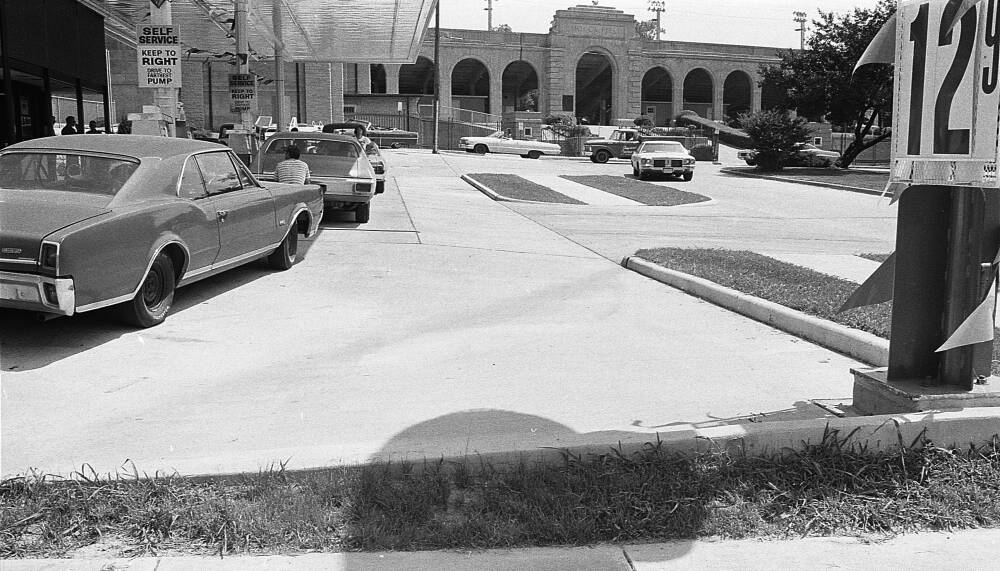 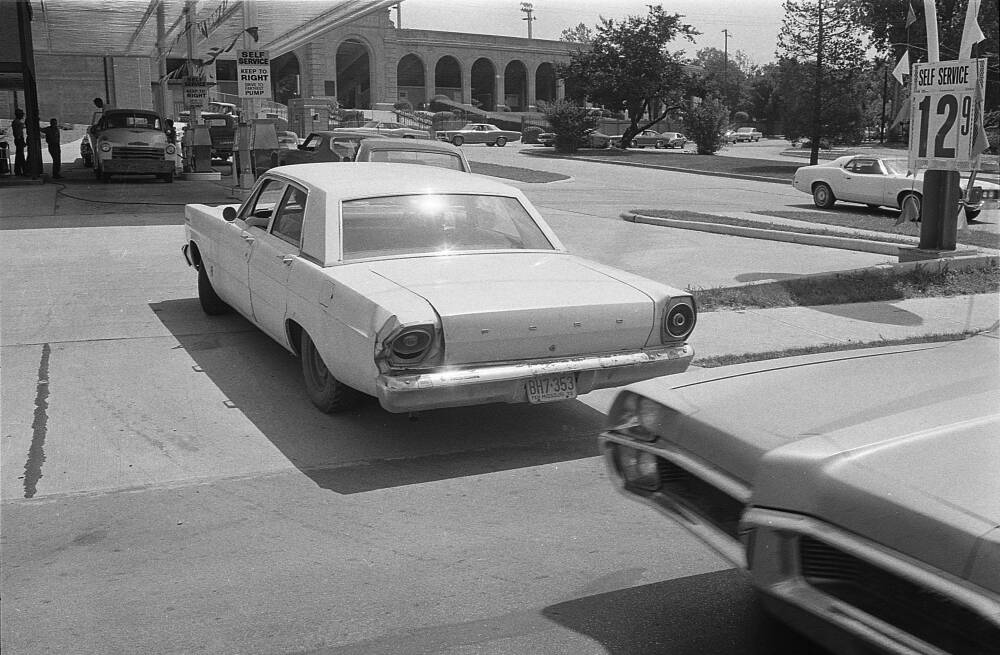 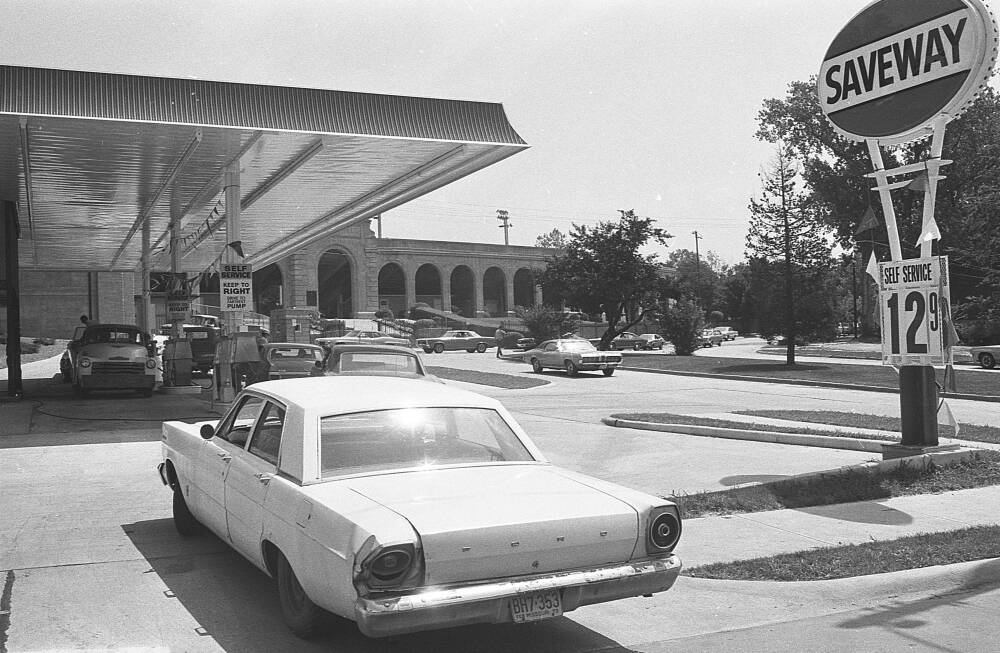