The following story has been submitted by a user of semissourian.com. To submit your own story to the site, click here.
User-submitted story by Laura Saupe 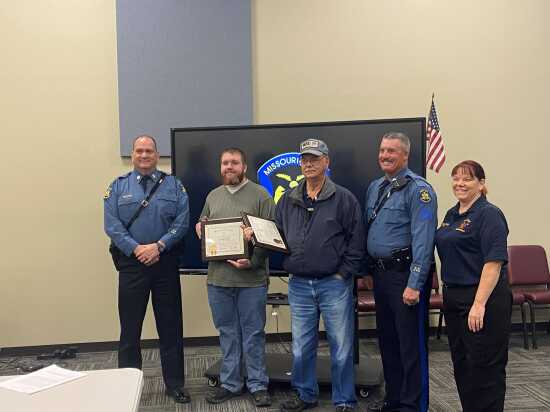 The Missouri State Highway Patrol, Troop E, honored Jacob Shelton, of Jackson, and Donald Pritchard, of Marble Hill, on Thursday, November 17, 2022, with the Honorary Trooper Certificate. The awards were presented by Captain Philip A. Gregory at the Bollinger County Public Health Center.

Shelton and Pritchard, both civilians, rescued an occupant from a single car accident on August 17 as the vehicle caught fire after traveling off the roadway and striking a tree.

The Honorary Trooper Certificate is presented to a non-employee who performs in an exemplary manner, and under dangerous conditions to aid another, or who unselfishly assists a member in the performance of their duties.

The Missouri State Highway Patrol has awarded approximately 200 Honorary Trooper Certificates since its inception in 1931.