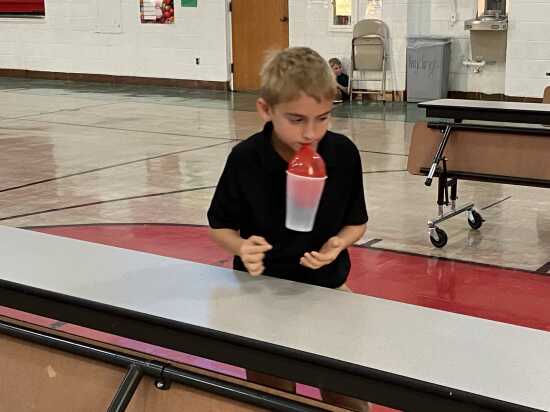 Owen Morrison of St. Michael's house had blown up a balloon inside of a cup and then successfully carried the cup, without touching it, to the other end of the table.

Once again it was time for fun and games for Guardian Angel School in Oran. On Wednesday, November 9, the archangel groups went to the gym for house game competition.

There were 3 games and each one proved to be difficult for some of the students. The first game, Balloon Cup Race, had 6 players to each blow up a balloon inside a cup and transfer the cup with the balloon, without touching it with their hands. A few of the students had difficulty getting air into the balloon or popping the balloon.

The next game was Muscle Building. Two students blew up balloons, tied them off, and stuffed them into an over-sized shirt on a third student. The shirt clad student, who had the most muscular body, marked the winning team.

The third game, Ping-Pong, had 2 students volleying a paper wad on a clipboard going from one side to the other. This proved to be rather challenging. 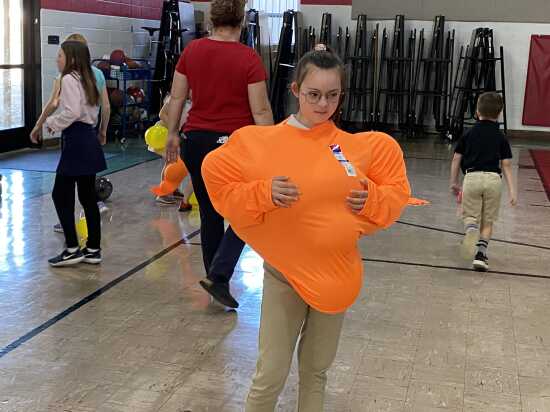 After having balloons stuffed into her shirt, Veronica Seyer of St. Gabriel's house shows off her new muscular body.

In the end, St. Gabriel's house won first, St. Raphael was second, and St. Michael came in third place. These points will go toward picking the overall winner in May.

Mae Roper volleys a paper wad over to Sawyer Dirnberger, attempting to continue the volley back and forth until they reached the other end. They are members of St. Raphael's house. Ms. Ann Whistler and Mrs. Jodi McVay, the house leaders, are cheering them on.
News about Cape and Jackson matters. Sign up for free updates.