SportsPlex has helped make Cape a destination for sports tourism 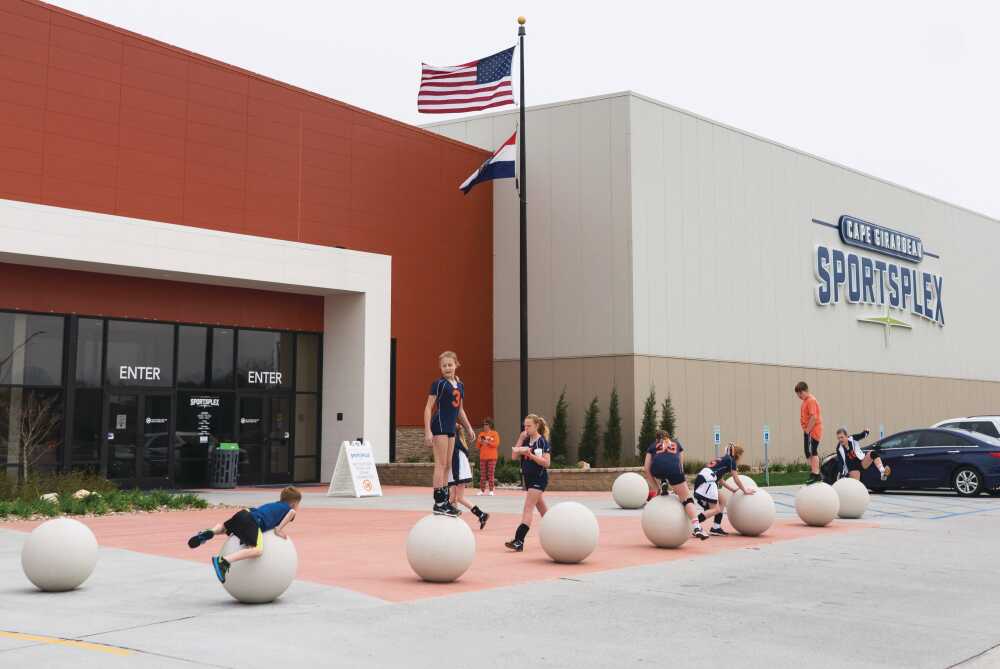 In the movie ōField of Dreamsö there is a line, whispered mysteriously: ōIf you build it, he will come.ö It worked in the movie. Ray Consello, played by actor Kevin Costner, builds a baseball diamond in the middle of his cornfield. Soon after, ballplayers from yesteryear, including ConselloÆs father, begin to appear and play AmericaÆs pastime.

A Hollywood script to be sure, but thereÆs a real-life concept thatÆs played out in Cape Girardeau: ōIf you build it, they will come.ö They, in this story, are athletes from across the region. And theyÆre coming to Cape Girardeau to compete at the cityÆs crown jewel: The Cape Girardeau SportsPlex.

Not only are they coming, but this group of athletes and their families are spending money while they are here Ś boosting the local economy. 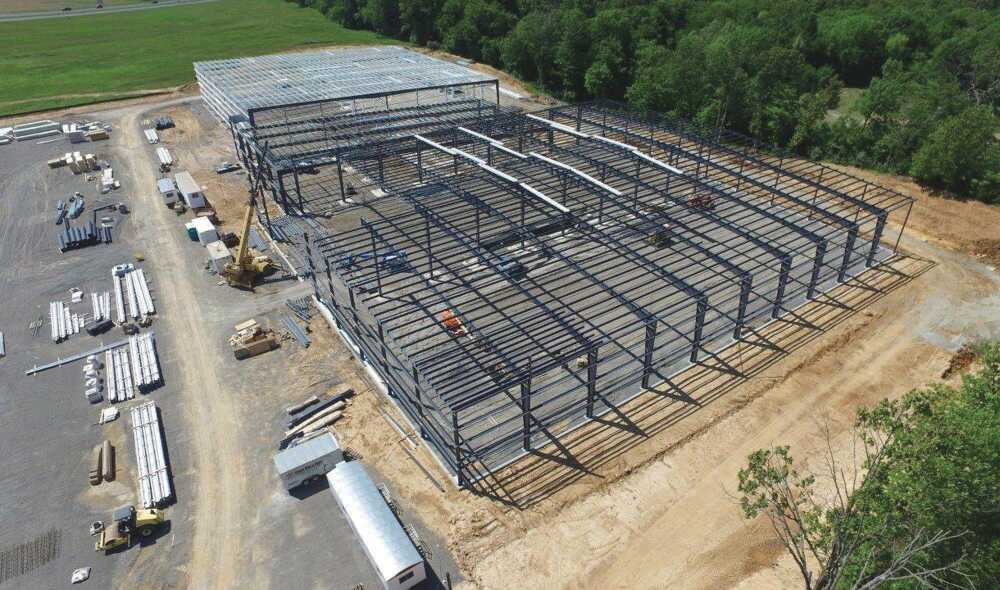 Cape Girardeau City Manager Dr. Kenneth Haskin told B Magazine the committee went into the project with a strong goal in mind: Impact the local economy.

ōThe original plan of investing in such a facility came from the concept of replicating what the Shawnee Park Sports Complex does during the late spring and summer for the community economically,ö Haskin said.

Scott Williams, recreation division manager for the city of Cape Girardeau, said the city hasnÆt always been a hot spot for sports that it is today.

With this background in mind, Haskin described the SportsPlex as a ōsuccess waiting to happen.ö

With confidence that upon completion the parking lot would be full and teams would travel regionally to use the facility, the project began. In May of 2017, the community celebrated the facilityÆs opening.

The financial goal of the SportsPlex was to break even after five years of operation. That five-year time frame is now. The city is happy to report that the goal was achieved in the 2020/21 fiscal year. And local leaders are even happier that theyÆre on track to do it again this year.

But thatÆs not without challenges like inflation, as all expenses are higher than they were a year ago.

In order to have continued success, it takes repeated support of local leagues, tournaments, rentals, etc. 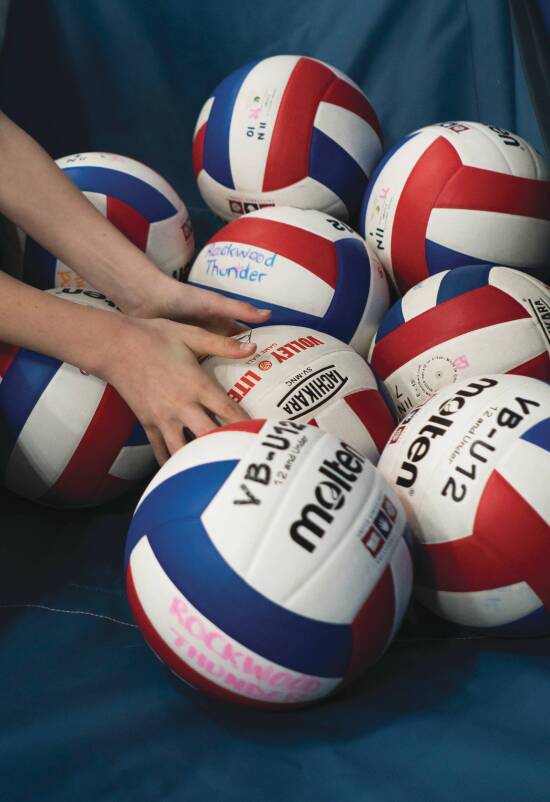 It may surprise some to know the largest user of the facility is club volleyball.

After volleyball, basketball and cheerleading bring out the most people to the SportsPlex.

Within the walls of the facility, the no. 1 revenue source is concessions. However, concessions sales are totally dependent on bookings and leagues, followed by open play/admissions, as well as field and batting cage rentals.

Sports leagues and court rentals as well as childrenÆs birthday parties have tripled over the past year and only seem to be picking up steam.

ōIt took a while to catch on. Once we had one and people attended, they would call us and want to book one for their own families,ö Davis said. ōThose are obviously local customers weÆre servicing.ö

With a staff of five full-time and up to 75 part-time employees, the facility hosts local youth leagues, over 40 tournament weekends a year, sports trainings and an estimated six-figure visitor total each year. 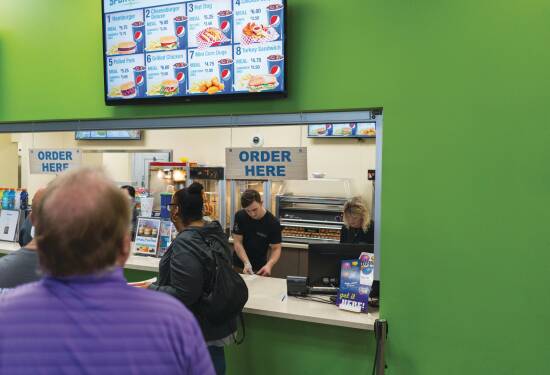 During inception when planning potential use for the facility, the committee sought support from local sports leagues and clubs so they could go into the project with guaranteed consumers.

NSSC is based out of Cape Girardeau with team members traveling as far as 140 miles away to play for the club. Ritter has been involved with club volleyball 25-30 years and brings in some of the SportsPlexÆs largest tournaments.

ōWhat I think the community doesnÆt understand is just how much this facility actually brings to the community Ś itÆs not just about sports. ItÆs about the economy,ö Ritter said.

The SportsPlex is hitting the mark when it comes to economic impact, according to local leaders.

Williams challenges local citizens to drive by the SportsPlex on a weekend and notice the cars in the lot and adjacent streets. Hundreds of families flock to the facility almost every weekend from January to September as Cape Girardeau plays host to youth basketball, volleyball and wrestling tournaments.

ōSome find their way to Cape Splash in the summer. They visit the mall, Academy Sports and other places in the evening when theyÆre done,ö Williams said. ōSo we truly feel this facility, as well as our other Parks and Rec facilities, really benefit the community probably more than most people know.ö

Ritter notes that in addition to teams traveling to Cape Girardeau, it also prevents local people from having to travel elsewhere, keeping local dollars close to home.

ōAnd it saves them money to where theyÆre not spending their money in Indianapolis or somewhere like that,ö he said.

Haskin concurred with the assessment of others that the SportsPlex is, indeed, helping a number of local businesses.

ōThe impact to the local hotel and restaurant industry has been huge to say the least,ö Haskin said. ōMany weekends, hotels are sold out in Cape Girardeau with overflow hotels being used in Jackson, Sikeston and Perryville.ö

If you combine the weekend tournaments at the SportsPlex with other Parks and Recreation facility and community events, Haskin said sold out weekends in Cape Girardeau are increasingly more common. 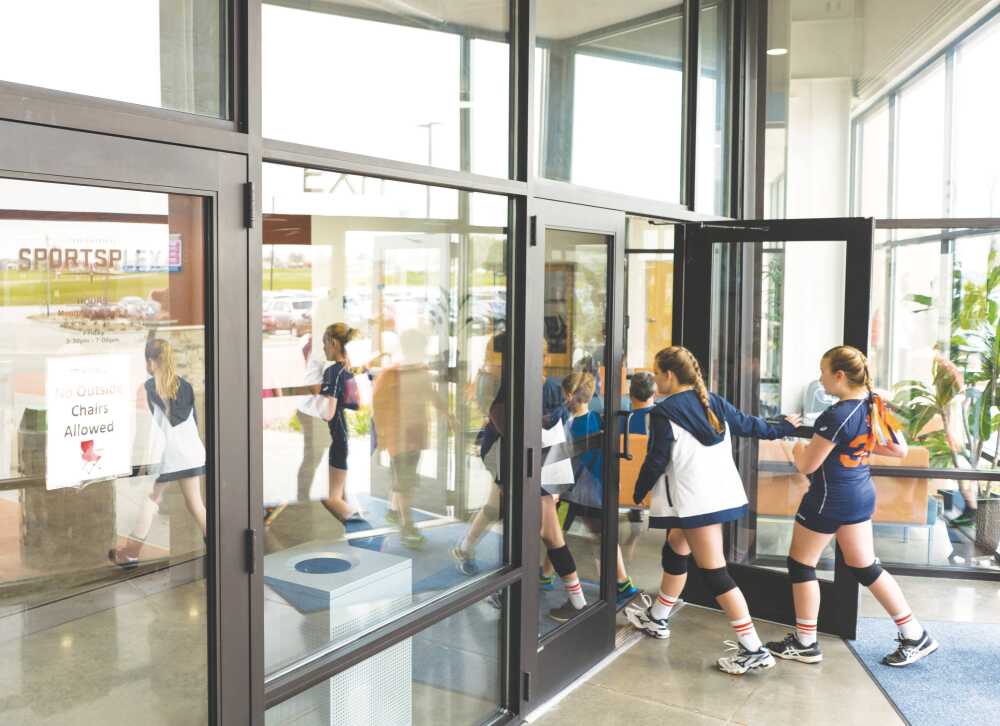 During the pandemic, the SportsPlex shut down for approximately six weeks then reopened with precautionary steps to be able to continue operating and provide a sense of normalcy for families and friendly competition for those interested.

ōWe felt we could do it safely,ö Davis said. ōWe were in communication with the health department constantly and had a precise strategy.ö

As a result of many communities across the region remaining shutdown during COVID, people traveled from as far as Texas to Cape Girardeau. The SportsPlex reports hosting new tournaments and teams that hadnÆt been to Cape.

The general consensus from local leaders is that the return visits of individuals and teams mean Cape Girardeau is on the right track.

ōI can say 90 to 95% of the people that come to Cape return to Cape,ö Newbern said. ōWhen seeing the SportsPlex for the first time, visitors are amazed and just blown away. Cape has a lot to offer.ö

SportsPlex staff hear a lot of compliments as visitors enter for the first time. Recently, Davis overheard a lady saying on her phone, ōYouÆve got to get here. YouÆve got to see this place.ö 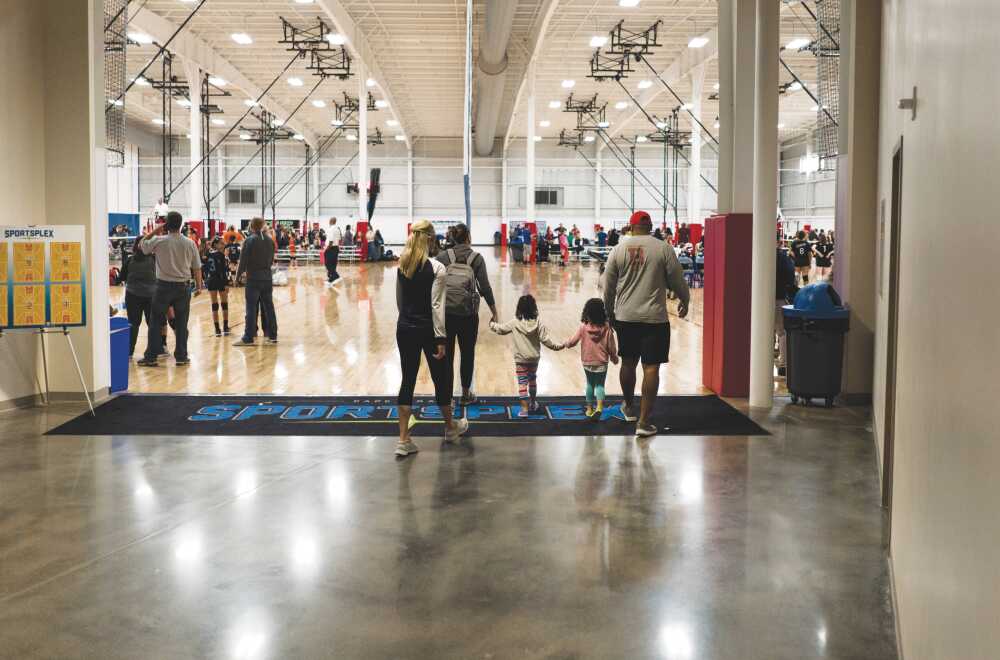 Looking to the future

As weekends near capacity at over 40 tournaments a year, what now? Can Cape support an even larger facility?

ōItÆs just been a great thing. And, I wish it was bigger,ö he said.

ōWe have people calling us this time of the year asking if they can go ahead and rent for the next year because they want to get on the books. The courts go fast,ö Davis said.

What would growth look like? It would include more fall tournaments and events, moving non-volleyball tournaments from January and February to allow for additional tournaments and additional revenue, and adding more summer camps and clinics. In addition, the SportsPlex looks to continue the expansion through a partnership with Southeast Missouri Preparatory School as they add more teams, resulting in more court/field rentals.

ōItÆs a lot harder to bring in fall events since most of them play outside, so we look to non-traditional events like wrestling, cheerleading or pickleball instead of volleyball or basketball,ö said Davis. Martial arts and cornhole are also possibilities.

Need: Adding turf fields could be the next play for the SportsPlex, bringing opportunity for larger indoor soccer tournaments and leagues as well as softball, baseball and soccer training. Additional opportunities on turf include flag football and bocce.

Site expansion and funding: The city would need to acquire funding in order to purchase the land to the north of the facility in order to have room for expansion.

ōWeÆre regional and regional is probably an understatement,ö Williams said.

With the thousands of people coming through the doors most weekends, the staff fields a lot of inquiries about the facility.

ōThey can pick our brains about how this place came about and how we operate and everything because of the success,ö Davis said. ōThey say they need one of these in their community.

ōI think we kind of take it for granted because weÆre here all the time. We get asked a lot who owns the facility, and theyÆre always a little bit surprised when they find out itÆs a city facility.ö

When relocating to a town, employment potential, schools and parks rank at the top of the list for priorities. Williams sees the SportsPlex, and all CapeÆs Parks and Recreation facilities, as a draw for not only weekend tournaments but as establishing Cape as a youth sports destination. 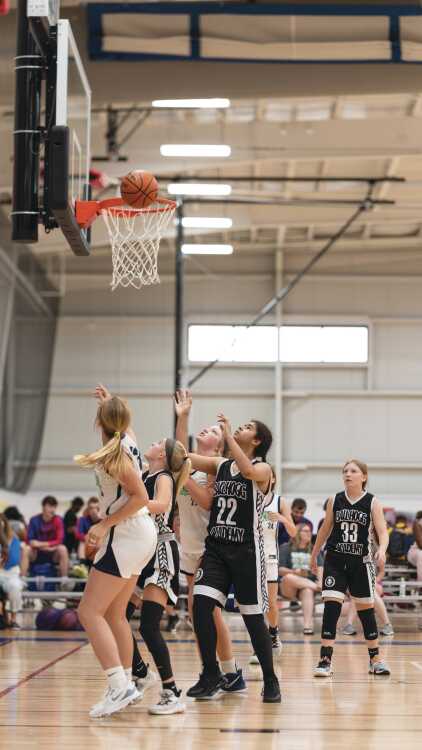 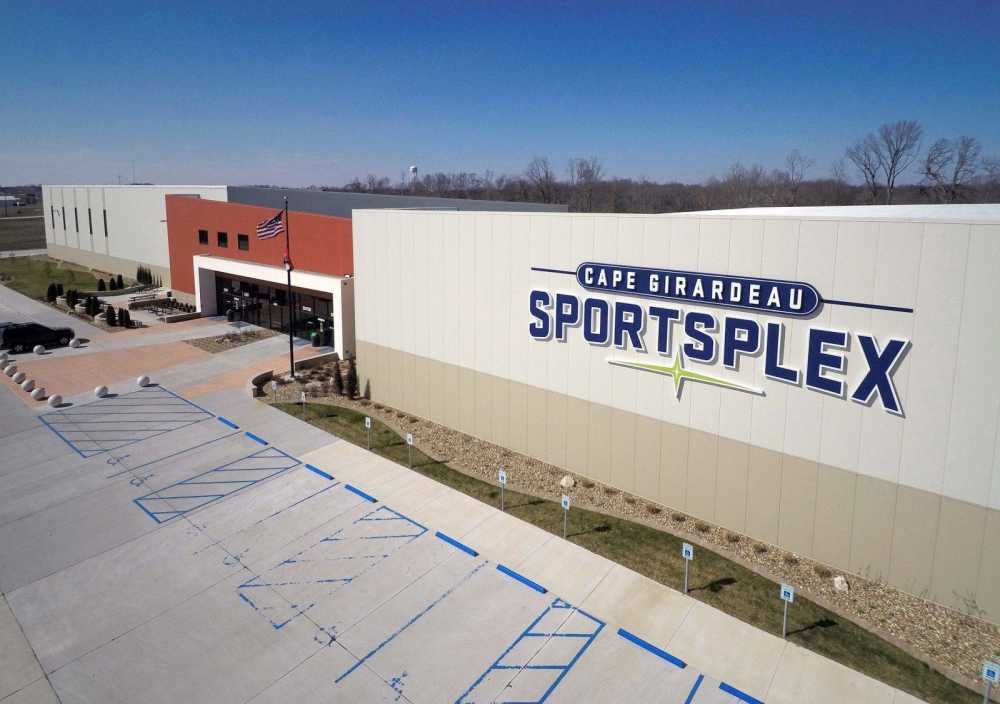 The New Economic Warrior
Jon K. Rust - Publisher - Southeast Missourian / Photos by Aaron Eisenhauer, Eisenphoto LLC
Inside the 121,000 square-foot Cape Girardeau SportsPlex on a Sunday afternoon in April, it's a whirl of color, energy and sound. Hundreds of girls are playing volleyball, many clad in neon jerseys, hair bows and knee pads. Their talent is impressive. ...
News about Cape and Jackson matters. Sign up for free updates.