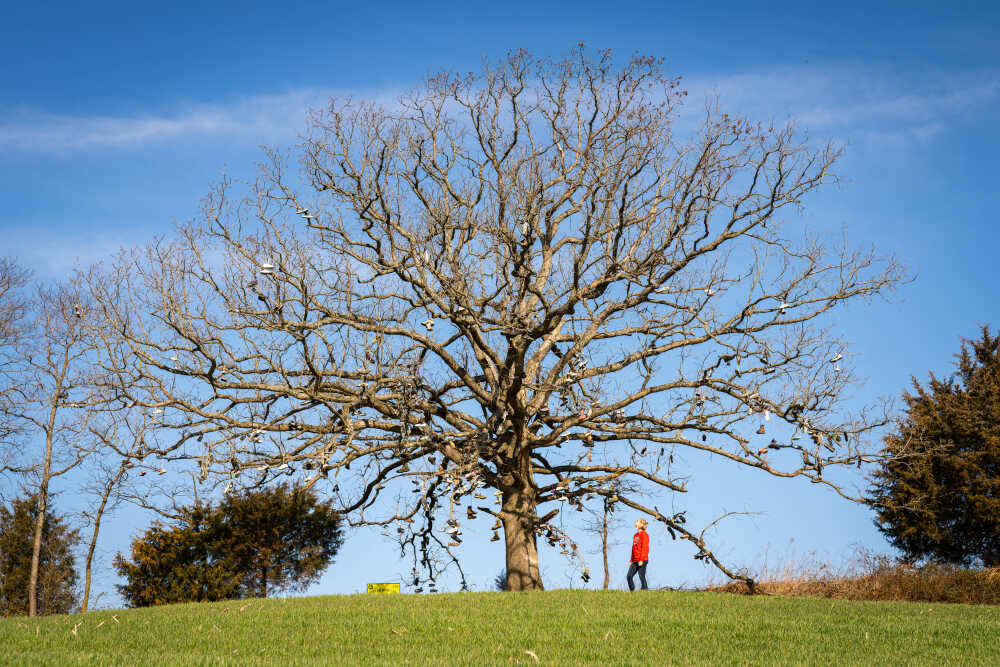 Kari Buerck, granddaughter of Glenda and Willard Hadler who founded the Hadler Shoe Tree, stands for a photo at the Hadler Shoe Tree next to Perry County Road 324. At holidays, members of the Hadler family throw shoes into the tree that stands on their grandparents' farm.
Photo by Aaron Eisenhauer

It’s a simple story, Kari Buerck says: Her grandparents, the late Glenda and Willard Hadler, went on a trip to Nevada and saw a tree with shoes hanging from the branches. When they came home, Willard decided he wanted to create a tree like the one they’d seen for his own family. He picked out a tree — a big one that can be seen from the road — on his Missouri Century Farm in eastern Perry County and threw a pair of old shoes up into it. At the next holiday family gathering, he loaded his three sons, daughter-in-laws and five grandchildren into vehicles, and they drove to the tree. Each person threw a pair of their shoes into it.

That was in the early 2000s, and Buerck says it became a family tradition, something they did at every holiday gathering. As more and more shoes began catching in the tree, her extended family noticed and began adding their own shoes. Soon, people they weren’t related to threw their old shoes into the tree, too. Now, Buerck says she has no idea how many pairs hang from the tree; it would be double, she says, if none of the shoes had fallen down. When shoes fall out of the tree, the family members do their best to throw them back into it.

“We never throw shoes away,” Buerck says. “We have a basket or a bag in our garage that when shoes are done, we throw them in there, and whenever we have time, we’ll come down and just throw them up [in the tree].”

The technique for throwing the shoes that works best, Buerck says, is tying the shoes together with bailing wire, because the shoestrings often break. She says she holds the wire with the shoes hanging and then throws it, releasing them early in the throw. Another technique that works, she says, is holding both shoes and throwing them high up into the air so the strings catch on a branch on the way down. 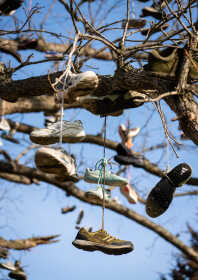 Tennis shoes, athletic shoes, boots and other footwear hang from the branches of the Hadler Shoe Tree near Crosstown in Perry County. Some of the shoes have problems written on them, and some of them are signed and dated.
Photo by Aaron Eisenhauer

The shoes in the tree tell the story of the area and what is important to the people who live there: worn-through work boots, faded tennis shoes and children’s dress shoes dangle from branches. And visitors to the tree have made the ritual what they need it to be: People have signed their names or written their worries on some of the shoes before throwing them up. Shoes with writing on them that state troubles like “self-doubt,” “weight struggles” and “farm problems” hang from limbs.

Although Buerck’s grandma passed away in 2016, her grandpa in 2018 and her father in 2020, the tradition of the shoe tree lives on in the Hadler family, and they welcome anyone who wants to be a part of it to find the tree on Perry County Road 324 off of Highway C in Perry County.

“To me, it’s the memories that go with it,” Buerck says. “I mean, it’s just a tree with shoes in it. But I remember being a kid and coming over with my grandma and grandpa and all my cousins and my uncles and my aunts and spending countless times trying to get shoes stuck in a tree. Just remembering the fun in it of joking with each other. … That’s what my grandparents were all about. Anything that was going to make a memory, that was going to stick for a long time that you could do with your kids and their kids and their kids, that was their goal in almost anything they did. So, that’s what I hope other people can get from it, that same enjoyment.”