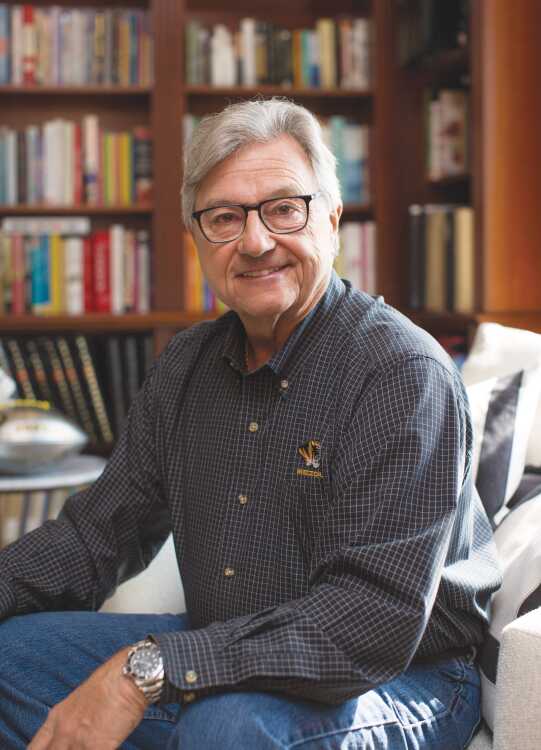 Keith Holloway sits for a photo in his home in Cape Girardeau. The Cape Girardeau business executive was appointed by Gov. Mike Parson to serve on the University of Missouri Board of Curators.
Aaron Eisenhauer ~ B Magazine

Keith Holloway is one of the newest members to the University of Missouri Board of Curators. The founder and owner of regional pallet brokerage Professional Packaging Inc., which he established in 1992, was appointed by Gov. Mike Parson to serve on the board as the representative from the Eighth District. His nomination was confirmed by the state Senate earlier this year.

Serving on the board has been an exciting and deeply personal opportunity for the Cape Girardeau business executive. It’s also part of the Holloway family legacy.

Holloway’s grandmother taught in a one-room school for 42 years. His father would later start a real estate and insurance business in the Poplar Bluff area, and when junior colleges started to take off in Missouri he saw an opportunity to bring one to the area for students who were not going to go to a four-year university.

“He said, ‘I think we need one in Poplar Bluff.’ He just started beating the drum,” Holloway told B Magazine. “About a year and a half later, they had an election — April 5, 1966, I believe. And they voted in the district. It was Wayne, Ripley, Carter and Butler counties to get the taxes, and it had to be approved. So they voted for the college, and it passed. Then they also voted for trustees at that time. So I was out there shaking hands, and it was my first political thing out there in front of the school where everybody’s voting. I was shaking hands. ‘Vote first for the junior college, and vote for Bud Holloway for trustee.’”

Keith Holloway earned his undergraduate degree from the University of Missouri in 1976, receiving a bachelor of science in business administration and finance. Over the years he’s been supportive of the university and plugged in to various efforts, including locally with the university’s outreach in Southeast Missouri.

The opportunity to serve on the system board, a highly sought after position, has been a crash course in learning about the inner workings of the university.

“The first thing I’ve learned is that it’s a really large enterprise,” he said, noting the four campus system which includes the University of Missouri Kansas City, the flagship campus in Columbia, the Rolla campus known for its engineering programs, and the St. Louis campus.

He told B Magazine that he’s been impressed with how conservatively the board governs. They’re focused on spending money correctly, staying away from duplication and allocating funds in a way that keeps tuition as low as possible. Additionally, he said the fiscal prudence is important so the university has the funds to hire well and invest in research, which is vital to a major institution.

“For instance, here in Southeast Missouri we have the Delta Research Center down in Portageville. It’s an outside part of the campus, but they do a lot of research that’s been recognized worldwide. Soybean, cotton, rice — all those crops are grown here in Southeast Missouri. See, rice can’t be grown unless you have the proper land. Most places in Missouri can’t grow it, but the bootheel can do it. … And as the curator for this part of the state, it’s important for me to support that and see that they get necessary funding to continue to research.”

“I know there is a strong emphasis on underserved populations and making sure that it’s either affordable or scholarships available for the underserved,” he said. “I know that’s been a big push for the last few years. And there’s progress being made on all fronts. I think that the four campuses are in a good spot. The chancellors that I’ve met are serious individuals. They’re accountability is big. Everybody always needs more money, whether you’re a private business, or whether you’re a church, or whether you’re a university, and there’s basically not enough funds to go around. So you have to find your own funding, but you really need to know that the money that you’re getting is being spent wisely. And I think that’s the emphasis that the board does have.”