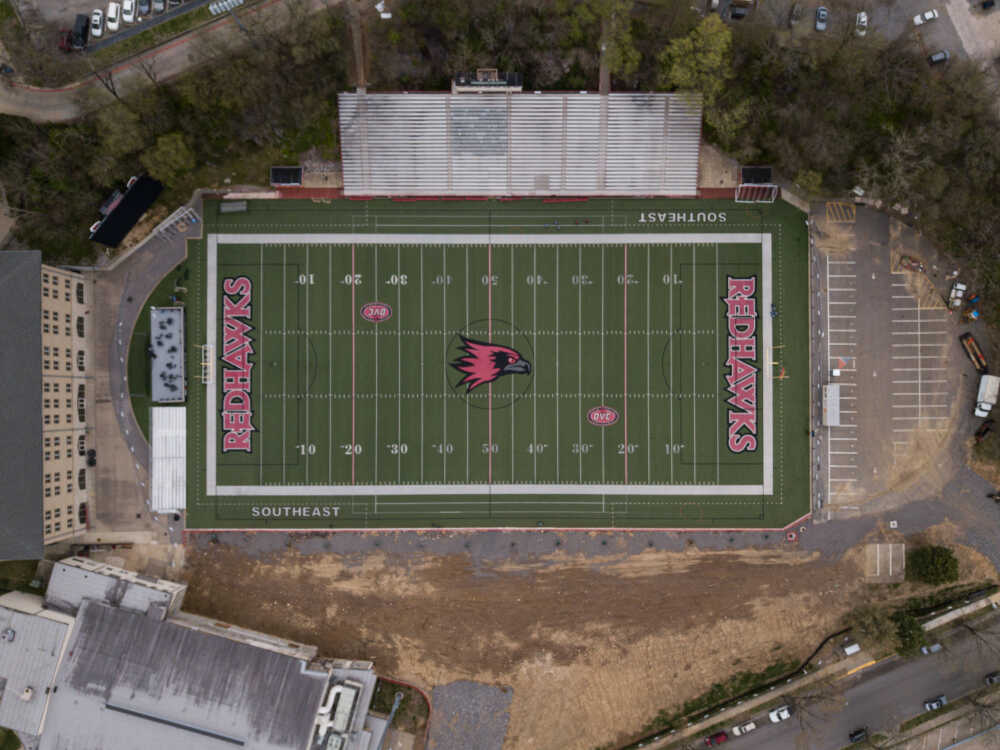 A drone shot of Houck Stadium as construction continues.
Photo by Aaron Eisenhauer

From the billions in broadcasting rights paid for NCAA national championships to the new bugaboo of “NIL” (Name, Image and Likeness licensing), college sports is big business.

Making sense of the dollars is a big part of what athletic directors do, and Southeast Missouri State University’s Brady Barke — who helped bring the 2020-2021 Ohio Valley Conference Commissioner’s Cup, recognizing the university with the most athletic success to SEMO — is among those keeping a keen eye on revenue and expenses.

On the expense side, at the top of the program’s ledger is replacing Houck Field with a “dual role, multi-use complex,” and with each passing day, the price tag of the multi-phase project increases. 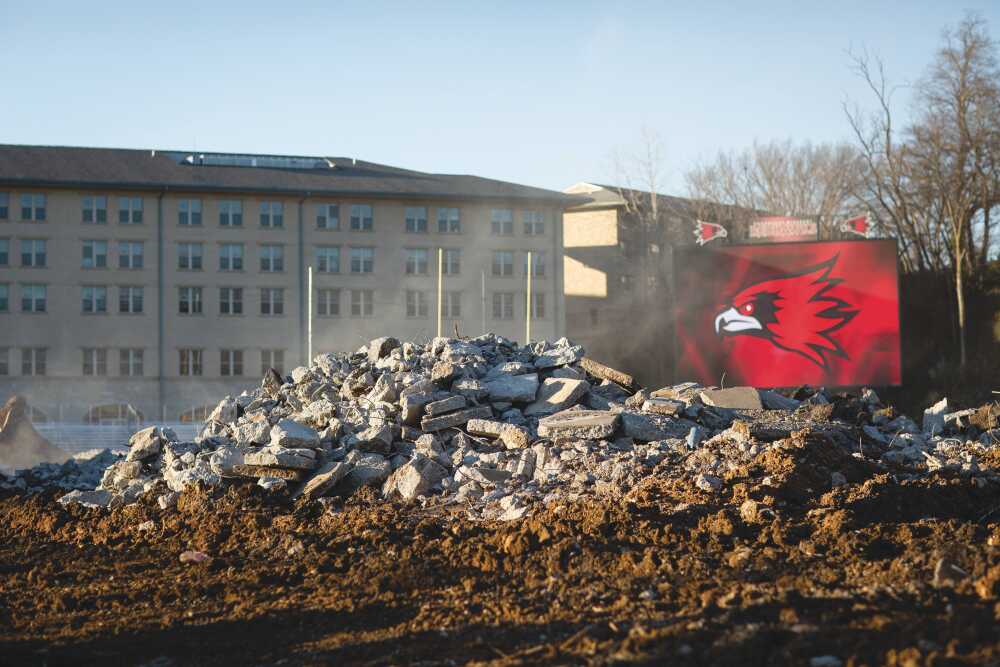 A video screen glows behind piles of rubble during the demolition of Houck Stadium.
Aaron Eisenhauer

University president Carlos Vargas reported in March bids for the project’s first phase were more than double what had been estimated.

“In total, two bids were received, ranging from $15.5 to $16 million. They both exceeded the initial estimate of $7.4 million provided ... in the fall,” Vargas said. “We knew at the beginning of this process that we may see cost fluctuations due to labor and materials, and we were prepared to absorb some increases, however, not at the scale of what was in these bids.”

Vargas said the goal of completing the first phase in time for this fall’s football season is likely impossible to meet.

“We had an idea of what we thought the cost was going to be for all phases. ... Based upon what we have seen with construction costs even in this initial phase, we know that to do the project that we had initially conceptualized it would cost much more than we anticipated,” he acknowledged. “What we are focusing on is an opportunity to be able to still look at all of the pieces of the puzzle but see if we can find a way to rearrange things, re-imagine some of it, to be able to ensure we still accomplish all of our objectives but maybe find a more efficient way to do it.”

The director said such changes could involve less-expensive materials and perhaps altering the facility’s layout and configuration.

Barke said he is hopeful completing the project in phases will generate more financial support.

“The phased approach is really going to be helpful to us. It will allow us to create some momentum,” he suggested. “As we go through and you get the initial phase done, you get some excitement, you understand that there is progress, and hopefully that helps with people’s investment and buy-in for future phases.” 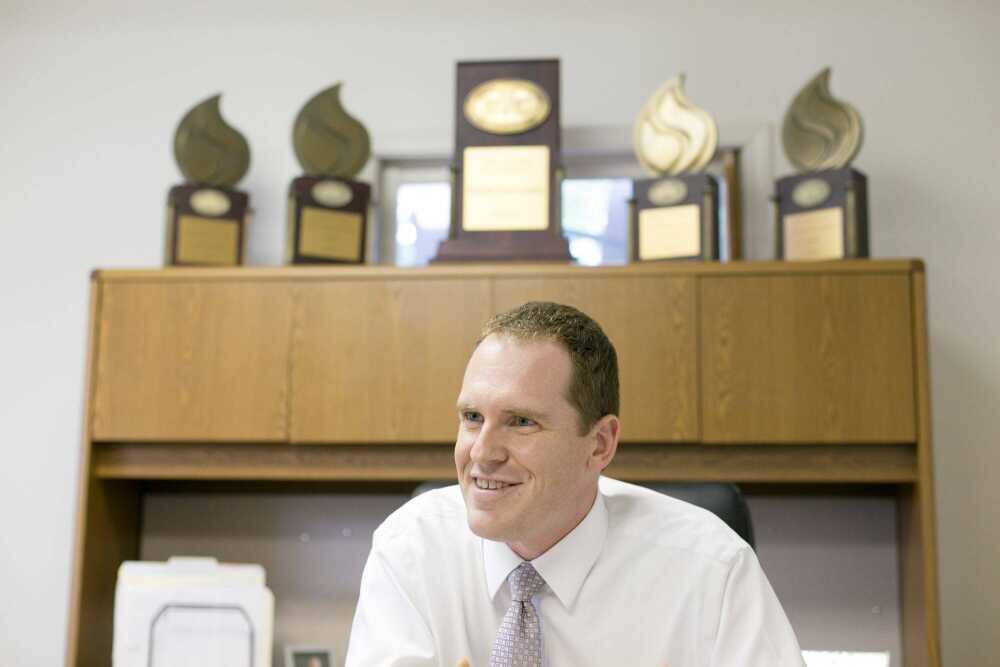 Barke recently addressed a number of other financial issues Redhawks administrators deal with on a daily basis. His comments have been lightly edited for clarity.

Q: How is a college athletics program funded? What are the revenue streams and expenses?

Barke: “Our program is funded a lot through institutional support. The university supports it similar to a lot of other departments at this level. There is some student fee revenue that students pay. So, it gives them the benefit of coming to all the sporting events for free. Beyond that, the rest of the budget is made up of guaranteed game revenue. Ticket sales revenue. Redhawks Club, which is our booster club. Sponsorships and other advertising revenue that we create. All of those things ultimately are what we put together to try to be able to fund personnel, operating budgets and scholarships for our student-athletes.” 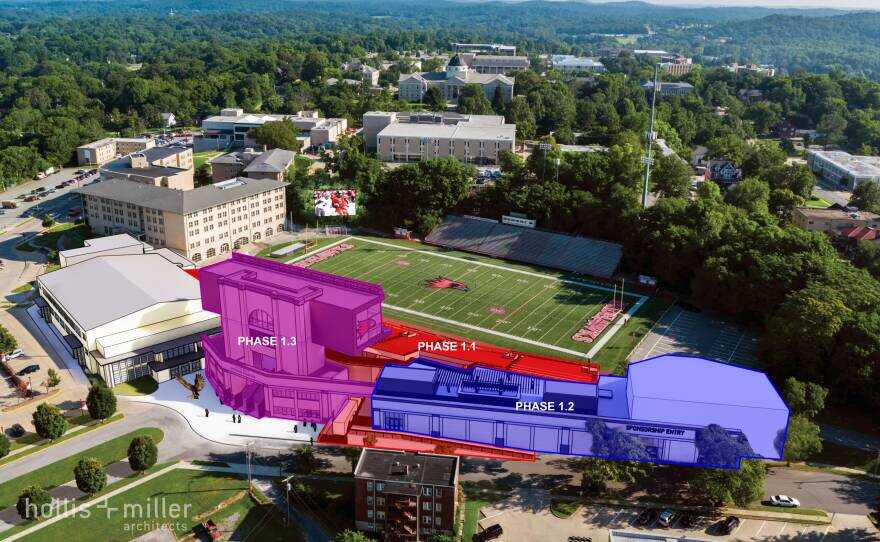 Q: What types of revenue streams have the program excelled at increasing?

Barke: “I think our staff has done a really good job of being creative and identifying what some of those sponsor opportunities are and being able to create some neat activations for those, and I think we have done a good job of trying to grow our Redhawks Club giving, our annual support. Some of that may be attributed to success and people’s excitement over what is happening.”

Q: Is there a particular revenue stream being targeted for growth?

Barke: “I think the Redhawks Club, the annual booster support, is a huge opportunity for us. If we can continue to grow there, that certainly provides us an opportunity to do more and take the next step competitively.”

Q: What are the major expense drivers for the program?

Barke: “The main categories are personnel and scholarships and then, generally speaking, operations. Now, a lot of operations gets tied into travel, but it also includes the equipment and apparel, recruiting expenses and those types of things.”

Q: What types of expenses have administrators controlled well?

Barke: “On the operating piece of it, we have done a really good job. We have tried to be creative. We have been able to renegotiate an [Under Armour] apparel contract that was able to save us some money annually. As we think about our charter bus travel, negotiating those contracts and being able to try to avoid significant increases in those costs because we know that all travel expenses are increasing these days. You think about personnel expense, market dictates compensation oftentimes. Nine of our 10 head coaches have been coach of the year in the last three or four years, and so they are all coaches that have opportunities to move somewhere else, and the market is going to dictate their value. You try to be fair within the means that you have.” 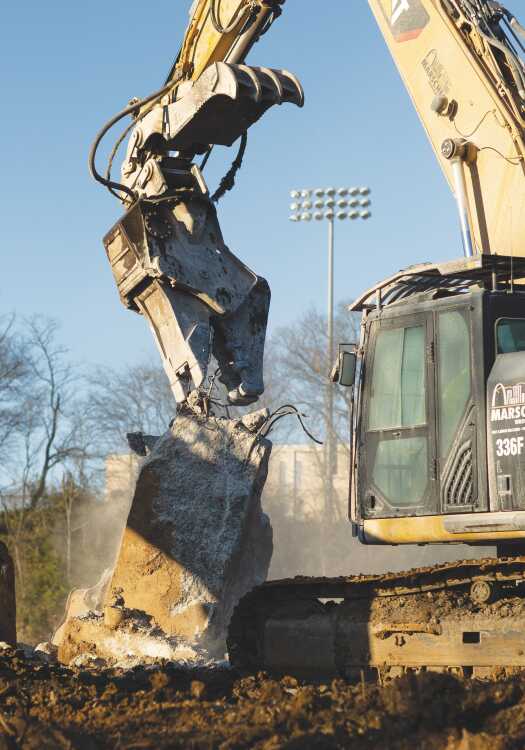 A crew from Marshell Wrecking, LLC removes rubble and debris as they continue with demolition of Houck Stadium at Southeast Missouri State University on Wednesday, Dec. 22, 2021.

Q: How does the program fare on a bottom-line basis?

Barke: “If we look relative to our peers, I think we are doing a really good job. Given the staffing that we have, I think we do a really good job of being able to maximize the revenue opportunities that are there. You look at the expenses side, I think people have done a good job of being able to separate wants and needs and understanding that these are the things we need to operate a Division I program, and these are the ‘nice to haves.’ And if we can ever get to those, that would be great. If not, these are the bare minimums that we need in order to be able to compete at this level.”

Q: What can an athletics program mean to a university in terms other than revenue and expenses?

Barke: “If you look at our student-athlete population, there is a lot of diversity it brings to campus, which impacts the overall experience students have in the classroom. You think about giving first-generation college students an opportunity to earn a degree. So, it’s important for the student athletes themselves and for the campus. ... There is value in name recognition. So, when you think about what does that mean for the average student and the value of their degree? The more prominent their institution is, the more perceived value there is.” 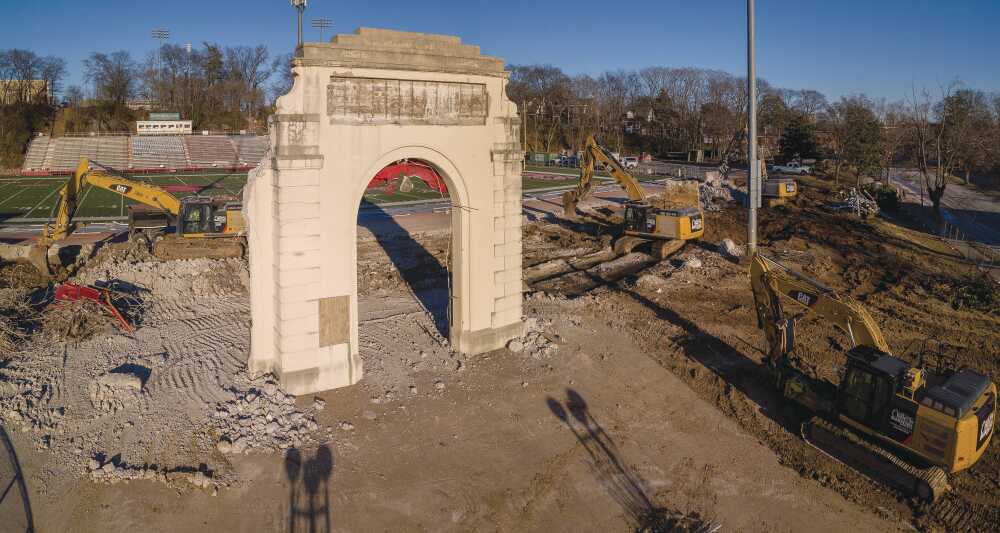 The archway that was once the main entrance of Houck Stadium remains standing as a crew from Marshell Wrecking, LLC removes rubble and debris.
Aaron Eisenhauer
News about Cape and Jackson matters. Sign up for free updates.
More to explore