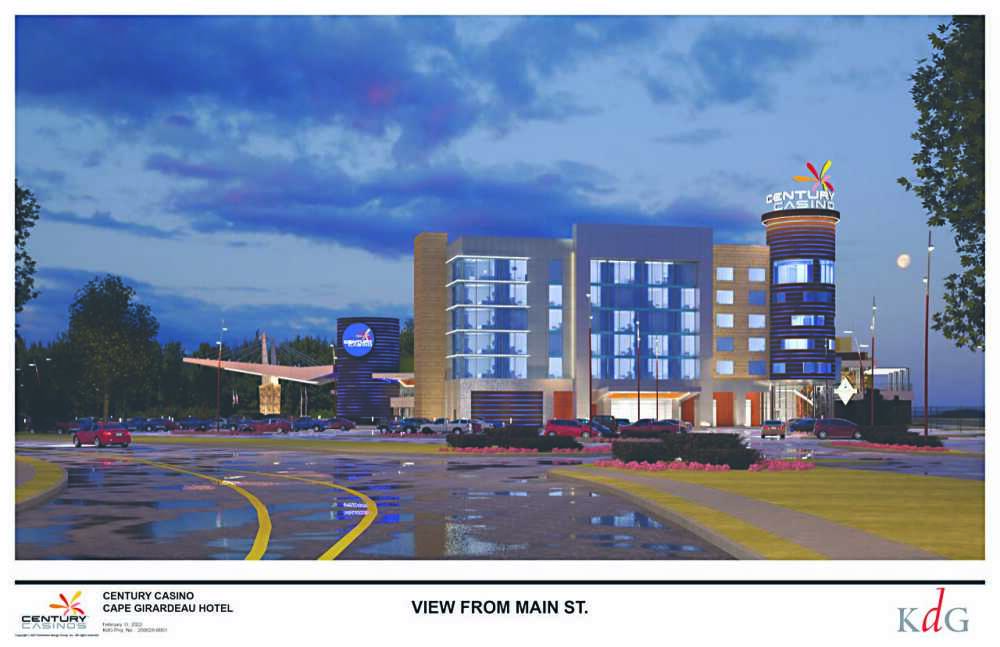 Hotel architect rendition. Hotel General Manager Lyle Randolph described the hotel’s design as “single load.” Instead of having each floor split by a hallway with rooms on each side, Randolph said, they opted to make the hotel taller and place rooms on one side only so that each could get a view of the river.

After announcing plans to expand its Caruthersville, Missouri, location, Century Casino has even more developments in the works. The company recently announced plans for a new hotel at Century Casino Cape Girardeau.

The hotel will have 75 to 80 rooms and rise nine stories on the southern end of the casino.

“The view from all these rooms will be the river, the bridge and downtown,” Lyle Randolph, general manager of the casino, told B Magazine in a fall interview.

The casino’s steakhouse — which has not reopened since the start of the pandemic because of the planning of this project — will transform into the hotel’s lobby and possibly host a coffee shop, he said.

Randolph described the hotel’s design as “single load.” Instead of having each floor split by a hallway with rooms on each side, Randolph said, they opted to make the hotel taller and place rooms on one side only so that each could get a view of the river.

Construction of the new hotel will also include adding a curved stairway leading to the Cape Girardeau casino’s new top-floor lounge area, Beacon 53.

“Right now, it’s a little challenging to get to the new venue because you have to go through the casino and find your way around,” Randolph said. “We will have a curved staircase that will lead directly to the venue from the outside.”

Each of the hotel’s floors will feature one, circle-shaped suite. The top floor will be designated entirely for full suites.

The project is estimated to cost $26 million.

“Cape needs this, especially downtown,” Fox said. “There are many, many times we’ve had multiple events going on at the same time and people have had to stay in Sikeston or Perryville because we don’t have enough hotel rooms.”

Downtown Cape Girardeau had no hotel for 47 years until the Marriott Courtyard hotel on Broadway opened in 2018.

The hotel has 91 guest rooms that can fill up quickly when events are held downtown, Fox said.

“When we have downtown events, whether it’s something like the Shipyard Musical Festival or Muddy River Marathon, it’s nice for people to stay downtown. This [the hotel] is a good way to augment what’s there and provide more rooms downtown.”

In December, Cape Girardeau City Council authorized a contract with Klinger and Associates to carry out a land analysis and feasibility study for a marina located north of the Red Star Access boat ramp near Century Casino.

“Before we even got into this, we had a meeting with the Corps of Engineers and U.S. Coast Guard to get their blessing to see if this particular location just north of the boat ramp would be feasible,” Fox said. “We got their blessing, and now it’s just a matter of looking at the study to see what it would entail, what the cost would be and how we’d want to do it.”

The grant would pay for 80% of the marina feasibility study. The study is estimated to cost $75,000, Fox said.

Century Casino announced in July its plans to expand its Caruthersville location.

In addition to the new hotel, Century will build an expanded facility connected to its current building with a second hotel conjoined to the main facility. Altogether, casino related developments in Caruthersville will total close to $40 million.

The added facility will measure more than 50,000 square feet with the casino consisting of 26,500 square feet.

The hotel will rise three floors up from the existing main floor and host 35 rooms with balconies. Suites will reside on the top floor.

“This project will be one of the largest construction projects in the history of Pemiscot County,” Randolph said.

The 36-room hotel stationed away from the main building will be within walking distance of the main facility and will serve as a more economical choice for visitors. Randolph said in fall, Century aims to have the hotel renovated and opened by the second half of 2022.

He hopes the new developments will spur more development in Caruthersville where more than 50% of the casino’s business comes from visitors from Tennessee.

“Casinos are a strong source of wealth and the ability to have a facility and multiple hotels to bring in more people from out of state means more dollars coming into the community,” Randolph said.

Century worked with local legislators to get the definition of an excursion boat modified to allow for the new Caruthersville structure to be built without having to “float.” The recent change in Missouri law requires casinos built inside a standard building to have a minimum of 2,000 gallons of Missouri or Mississippi River water underneath it.

The law allows Century Casino in Caruthersville, the last riverboat casino in the state, to move inland.

“That really stimulated the project,” Randolph said. “It didn’t make sense from a financial standpoint to recreate a costly floating platform.”

Randolph estimated the new Caruthersville hotel and facility developments will be finished sometime in 2024, with Cape developments finishing in 2023.

The Caruthersville and Cape Girardeau developments will be between a $60-65 million investment into Southeast Missouri, Randolph said.

“Not only is this great for Century, but it’s great for the community as well,” Randolph said.