McCloskeys say they waved guns because of 'violent' mob 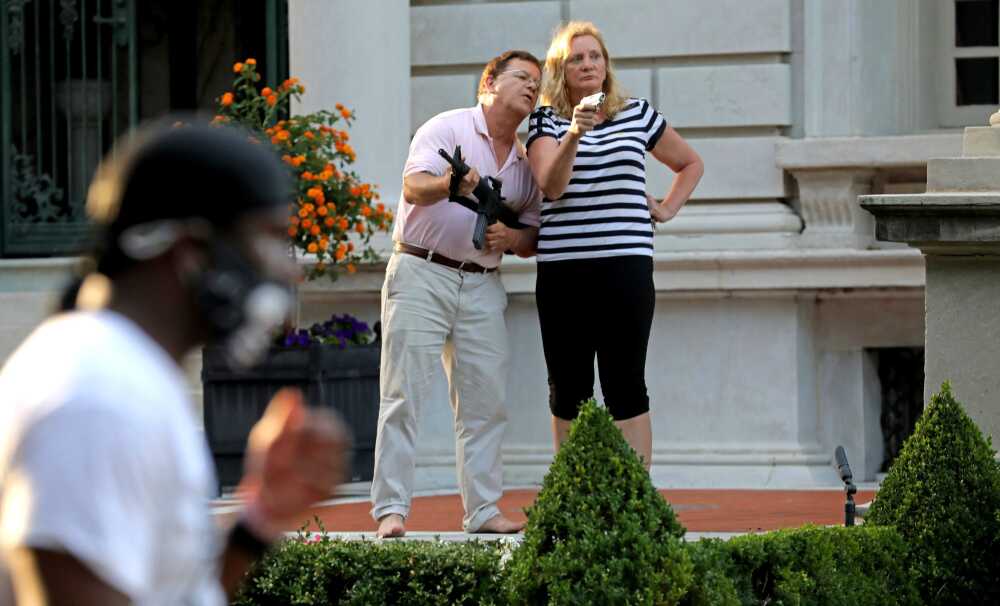 Armed homeowners Mark and Patricia McCloskey, standing in front their house confront protesters marching to St. Louis Mayor Lyda Krewson's house in 2020 in the Central West End of St. Louis. The St. Louis couple who waved guns at demonstrators outside their home are seeking to keep their law licenses by arguing they were protecting their property from a violent mob.
Associated Press file

ST. LOUIS -- A St. Louis couple who gained fame after waving guns at protesters near their home in 2020 are seeking to keep their law licenses by arguing their actions were justified because they were defending their property from a violent and threatening mob.

Mark and Patricia McCloskey, who are both lawyers, made that claim in response to a complaint asking the Missouri Supreme Court to suspend their licenses.

The demonstrators went past the McCloskeys' home on June 28, 2020, at the height of racial injustice protests sparked by the killing of George Floyd under the knee of a Minneapolis police officer.

The couple, who were eating dinner on the patio with their daughter, responded by waving two weapons at the protesters. No shots were fired and no one was hurt.

Their actions gained praise from conservatives, including then-President Donald Trump. Mark McCloskey is now a Republican candidate for the U.S. Senate.

They contend in their legal response violence during protests across the country in 2020 spread to St. Louis, where demonstrations "involved significant unlawful and violent conduct," KCUR reported.

The response cites a report by the Major Cities Chiefs Association finding nearly 89% of protests in St. Louis in June 2020 involved unlawful activity and 11% involved some level of violence.

The McCloskeys say some of the 350 to 500 protesters who marched past their home on the way to the then-mayor's house ignored signs they were entering a private street and destroyed a gate in front of their home, which they contend constitutes criminal rioting under Missouri law.

Some of the protesters shouted death, rape and arson threats against the couple, their daughter and their property, they said.

The McCloskeys were protecting "their lives, home, and property by displaying firearms" and holding off "the threatening mob," the response states.

Special prosecutor Richard Callahan has said his investigation determined the protesters were peaceful.

"There was no evidence that any of them had a weapon and no one I interviewed realized they had ventured onto a private enclave," Callahan said in a news release after the McCloskeys pleaded guilty to misdemeanor charges.

Despite the pardons, Missouri's chief disciplinary counsel, Alan D. Pratzel, has recommended the Missouri Supreme Court indefinitely suspend the McCloskeys' law license with no chance for reinstatement for six months. He said their actions showed "indifference to public safety" and involved "moral turpitude."

In their response, the McCloskeys contend the pardon "obliterated" their convictions and demonstrates their conduct did not constitute moral turpitude.

The McCloskeys' response notes the couple has received widespread public support and includes what it says are more than 250 unsolicited letters of support.