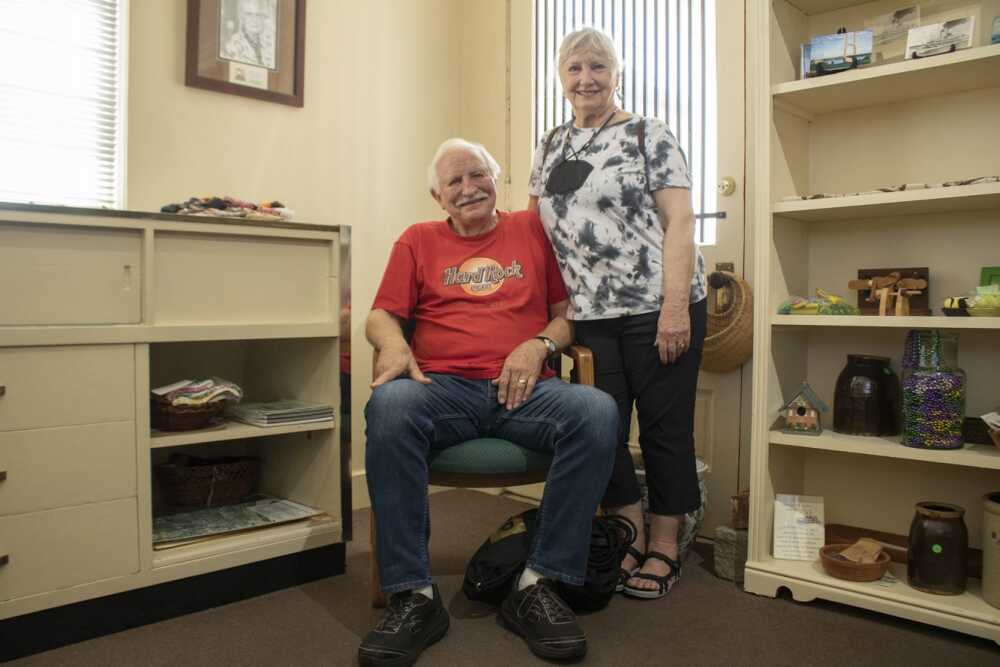 Randy Martin and his wife Patti Martin pose for a photo at Cape River Heritage Museum on Friday. Randy Martin arrived in Cape Girardeau on Friday for the first time since 1949. His family left the town in 1949 after a tornado destroyed their home.
Monica Obradovic

Randy Martin was 5 years old when he had an experience he'd never forget.

In 1949, Martin, now 77, lived in Cape Girardeau with his mother, father and older brother, Gary. He doesn't remember much about living in Cape Girardeau besides the "muddy Mississippi," visiting his grandfather who worked on the railroad and playing in his backyard.

But one day has always stuck in his mind. May 21, 1949 -- the day a tornado left a trail of destruction through the city.

Friday marked the first time Martin had been in Cape Girardeau since shortly after the twister destroyed his family's home. He and his wife, Patti Martin, were in town for the day as their riverboat cruise docked in Cape Girardeau's riverfront.

Martin and his family lived on the second floor of a house near the Cape River Heritage Museum (where, exactly, Martin can't remember).

His father was at work the night of the tornado. Mom was at home, feeling tired. She worked at a restaurant owned by Martin's grandfather, where meringue was stacked so high on top of pies that Patti Martin recalled her still boasting about them years later. 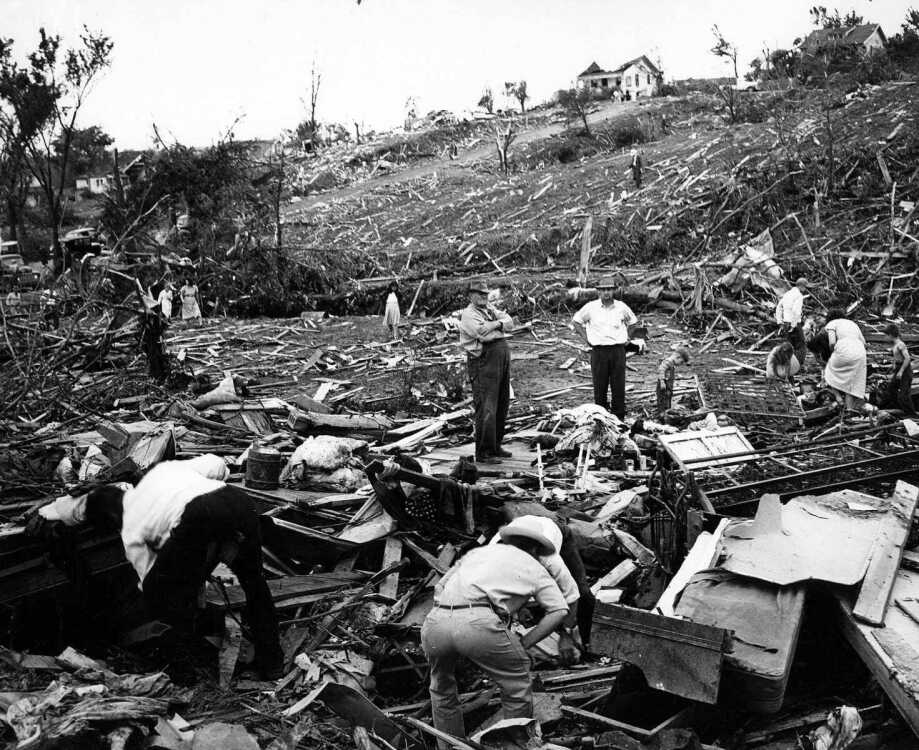 Cape tornado's 70th anniversary; more history of the railroad bonds
Sharon Sanders
I decided several weeks ago NOT to write another blog on the Cape Girardeau tornado of May 21, 1949. But I couldn't let the 70th anniversary of that tragedy go by completely unmentioned. So, instead, I include here the links to other blogs the Missourian has done about the the tornado, as well as a link to our 60th anniversary stories. I'm also including a list of those killed in the storm. May they never be forgotten...

Gary Martin, 8 at the time, wanted to see a movie at the Broadway Theatre. Mom said no.

"So, he dressed me up; put a little bow tie on and brought me to my mother, Lorraine," Martin said. "Gary said, 'Can we go to the show now?'"

So, they went to the Broadway Theatre.

What ensued after the family left home, Martin points out, is memory filtered through the eyes of his 5-year-old self.

Of course, he remembers watching cartoons. He wondered, anxiously, why the lights in the theater suddenly switched off halfway through the second cartoon.

A man came into the theater with a flashlight to warn them of the tornado. Someone said the tornado traveled near the Martins' home. They slept on the floor of a dance hall his grandfather owned that night.

The twister lasted 10 minutes, killed 22 people and hospitalized 72. It destroyed the Martin's house approximately 30 minutes after they left.

When the Martins returned home the next day, they found the front of their house was gone.

He and his brother traveled through the debris looking for any possessions they could salvage.

Though, even before the tornado, they didn't have much, Martin said.

But what they did find couldn't have been more important. In the backyard, Gary Martin found his father's gold pocket watch. His father inherited the watch from his father. Gary Martin's son would later inherit it, too.

At his brother's wake decades later, Martin said he credited him with saving his life. Gary Martin died four years ago after a battle with Parkinson's disease.

"My brother saved my life," Martin said. "We wouldn't be here without him."

The Martins moved to California after the tornado to stay with Lorraine Martin's parents. Martin has lived in the state ever since and had a "lucky life," he said.

He and his wife live in Naples, California, where they own a real estate company.

The couple had four children (though two have deceased), 10 grandchildren and one great-grandchild.

Martin said he didn't expect to feel emotional when he arrived in Cape Girardeau on Friday. Up until that point, it was just another place he lived, another stop on the riverboat cruise.

"The way we left gave me bad memories of it," Martin said. "But it's a really charming town, and I probably would've been okay living here the rest of my life."