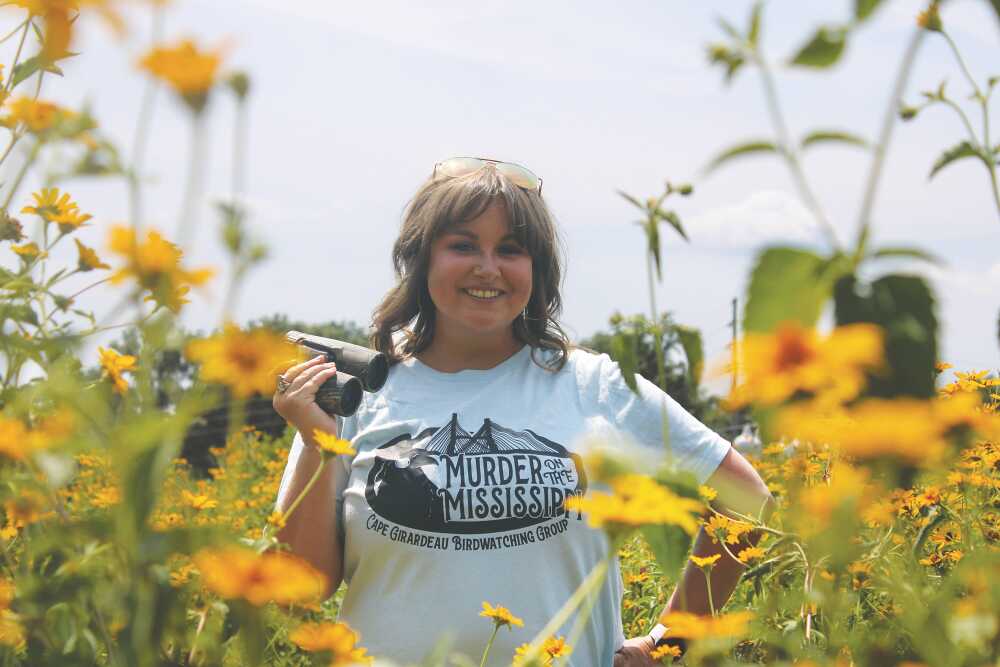 Whitney Quick, regional director at Better Business Bureau Cape Girardeau, is using her love of bird watching to bring people together to be “at one with nature.”

Quick recently started a Facebook group for bird enthusiasts, Murder on the Mississippi, which she said is open for anyone to join, even if they have never been bird watching before.

The group meets once a month to go look for birds together and utilizes a variety of cellphone apps to help identify birds. So, “you really don’t have to know anything about birds,” Quick said. The group also hosts guest speakers and plans to do other activities revolving around bird watching in the future.

“Bird watching is definitely something that can be relaxing and make you feel at one with nature, but it can also be really exciting finding birds you’ve never seen before or that maybe aren’t as common in this area,” Quick said. “It’s thrilling, actually, in a kind of boring way.”

Quick said she got into bird watching in high school, and it was something she “just sort of held onto.”

After that, Quick said she was able to continue identifying birds everywhere she went, and it became something she did well into adulthood.

Although Quick considered a degree in environmental studies, she decided to pursue a major in public relations from Southeast Missouri State University, but still obtained a minor in outdoor recreation.

While she’s always loved bird watching and other outdoor activities, Quick said it was the coronavirus pandemic that motivated her to start the Facebook group.

“I have worked in PR for the past decade doing events, networking, things like that, and then COVID happened, and I could no longer plan events. So I needed an outlet and [the group] sort of became my outlet,” Quick said. “I like to create opportunities for me and my friends to hang out, so that’s kind of where all that stems from.”

Quick said the group got its name because a group of crows is often referred to as a “murder of crows.” It seemed suitable.

“It’s just a good, collective group,” Quick said. “People come to learn. Some come to teach. There’s no pressure, and it’s just something to do to get people up and moving around outdoors.”

Members of the group are constantly sharing information, Quick said, and even she is frequently learning new things from participating in the group.

One thing the group is adamant on is educating each other and others outside the group on remaining a bystander in nature and strictly watching birds as opposed to tracking them, Quick said, which causes the birds high levels of stress.

“[Bird watching] is just fun, but it’s really important to not make nature any worse — just leave it the way you found it,” Quick said. “A lot of people really appreciate nature while they’re out and just like to look at birds, but it’s important to talk to people and educate them about preserving the area.”