“They Made Education No. 1” 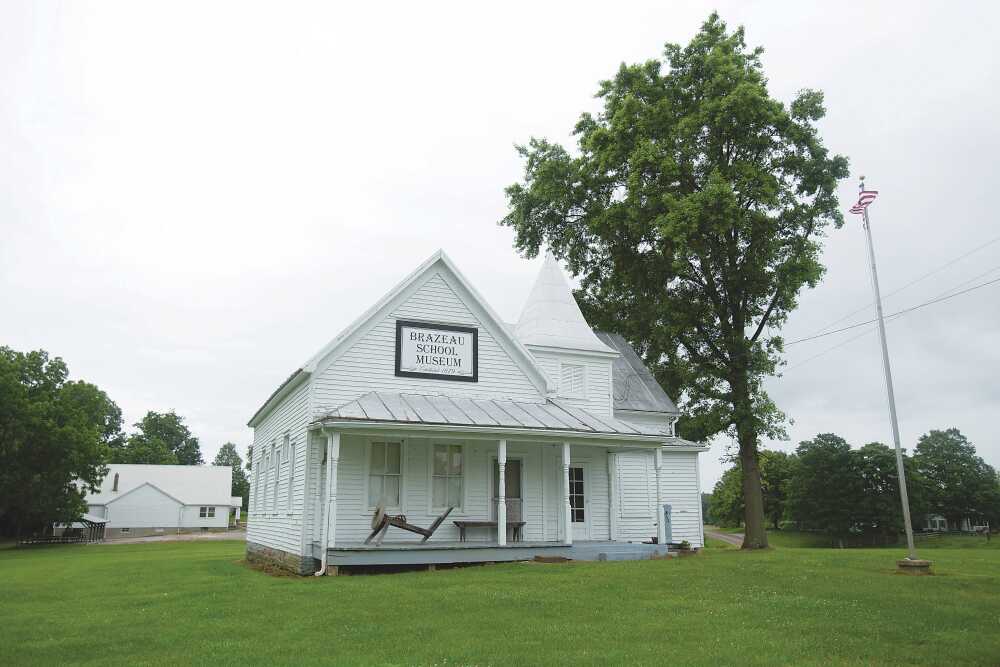 The Brazeau School Museum is housed inside the town's old school building in Brazeau, Mo. The building dates back to 1879.
Aaron Eisenhauer

When John Barber attended Brazeau School from 1950 to 1958, the school at Seventy-Six, Mo., an unincorporated community in the Brazeau Township of Perry County that depopulated in the 1950s, had just closed. Although there were eight grades represented at Brazeau School, the teacher only taught six grades each year, and John started school during a year that got skipped, going from fourth grade to sixth grade to fifth grade to eighth grade to seventh grade throughout his time there. His family’s history with the school runs deep: his father was a teacher there, as were his aunt and grandmother. When John attended, there were 20 students at the school, and he says he enjoyed being there “as much as you do” when one is a child and doesn’t think about experiences while living them.

Now, it’s a part of his history that matters to him.

“It’s something that you don’t want to forget,” John says. “You want to have memories of it, and the best way to do that is to preserve the written part.”

That’s what he, his wife Linda Barber and other members of the Brazeau Historical Society do through the Brazeau School Museum, which began in the 1980s when the Brazeau Presbyterian Church allowed the Brazeau Historical Society to utilize the building for a museum and locals began donating objects from their family history to put on display. Today, there is a wide variety of items to view throughout the two school rooms, including books of Brazeau families’ photos and genealogy; memorabilia from the 1904 World’s Fair in St. Louis, which Brazeau residents brought back after traveling to the fair by train as well as boat on the Mississippi River; and a nearly-200-year-old autoharp that was used by the founding members of the church when they didn’t have an organ. The bell also still works, and visitors can pull the rope to ring it.

John Barber points to his own likeness in a class photo from 1957. John attended the school from 1950 to 1958.
Aaron Eisenhauer

Linda says even in the 1800s, the people who settled Brazeau had a school called The Academy. The adults in the community were professionals such as draftsmen, doctors and lawyers who influenced the early growth of Perry County. In addition, when the Lutheran settlers from Germany came to the area and founded Altenburg, Mo., and Frohna, Mo., the Brazeau community who was already established in the area helped the new settlers make it through the first few winters.

The school that today houses the museum was built in 1879. For a brief period of time, high school students attended school in a second, adjoined room. The high school no longer functioned when John attended; then, students could study in the second room, and they also ate lunch there, the likes of fried chicken and chicken and dumplings cooked each day in the same room by one of the women in town. In 1965, the school was consolidated, and students began attending the public school in Perryville, Mo.

The town, too, is home to buildings that speak of Brazeau’s history. The blacksmith shop still stands, as does the bank and post office. The Cody House, the oldest house in the town, and the Tea House Bed and Breakfast, a private home the telephone operator and the postman lived in, are also maintained by the Brazeau Historical Society. All of these buildings were built before the turn of the 20th Century. A winery makes its residence in the building that was once the grocery store.

“Tradition is very important here,” says Brazeau Historical Society vice-president Louella Barber. “When the letters go out for membership in the historic society, around 50 go to other states. The people that grew up here and have ancestors here, they support us. It’s the small town and the people who lived here — they have good memories growing up in the country.”

Artifacts and keepsakes from the families who founded Brazeau are displayed at the Brazeau School Museum. Some of the items on display are more than 200 years old.
Aaron Eisenhauer

Linda has directed the Brazeau School Museum for the past 10 years. Her love of history began when she was a child listening to her grandfather — who owned land in what is now Trail of Tears State Park — tell her about the plants in the woods, where his traps were located and the history of the area. She says he “made me appreciate what we had;” she wrote this history down, beginning when she was 14 years old.

It is this appreciation for the past that she hopes to pass along to her own grandchildren and to others who visit the Brazeau School Museum.

John Barber flips through pages of old records kept in the Brazeau School Museum. His father, aunt and grandmother were teachers at the school.
Aaron Eisenhauer

“I love history. I love the printed word, that somebody wrote it down for somebody else to read. And I read,” Linda says. “I want my children and grandchildren to know and appreciate that the people who came here form North Carolina were educated, and that they made education No. 1.”