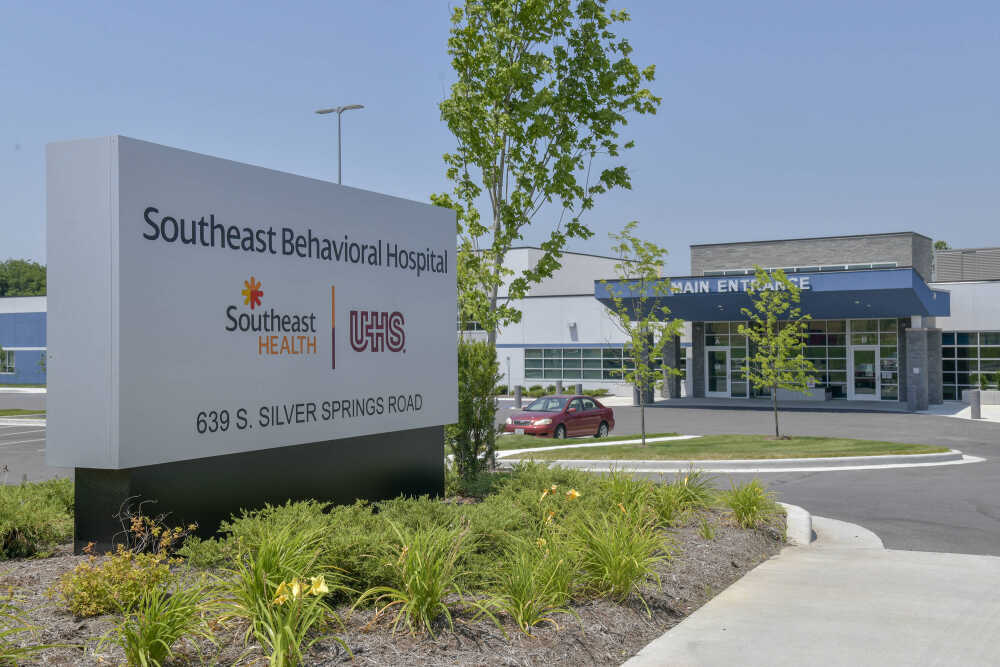 Cape Girardeau’s new behavioral health hospital is now treating patients, and at the helm of the operation is a seasoned health care administrator who has a clinical and business background.

Tim Cockrell started Aug. 1, 2020 as chief executive officer and managing director of the Southeast Behavioral Health Hospital, a joint effort between Universal Health Services (UHS) and SoutheastHEALTH, and he is focused on making the facility’s rollout a success.

Finishing the accreditation process and making hires would be a big enough job on top of his other responsibilities. But doing this during a pandemic has led to another layer of decision points.

“Once we get our official letter in the next couple of weeks, we will be able to then apply for Medicaid and Medicare and be able to accept those for reimbursement,” he told B Magazine during an interview the Tuesday after Memorial Day. At that time, commercial insurance was the only thing that the hospital was being reimbursed.

Accreditation also means the facility will be able to accept involuntary patients going through the court system and legally be able to require them to stay. 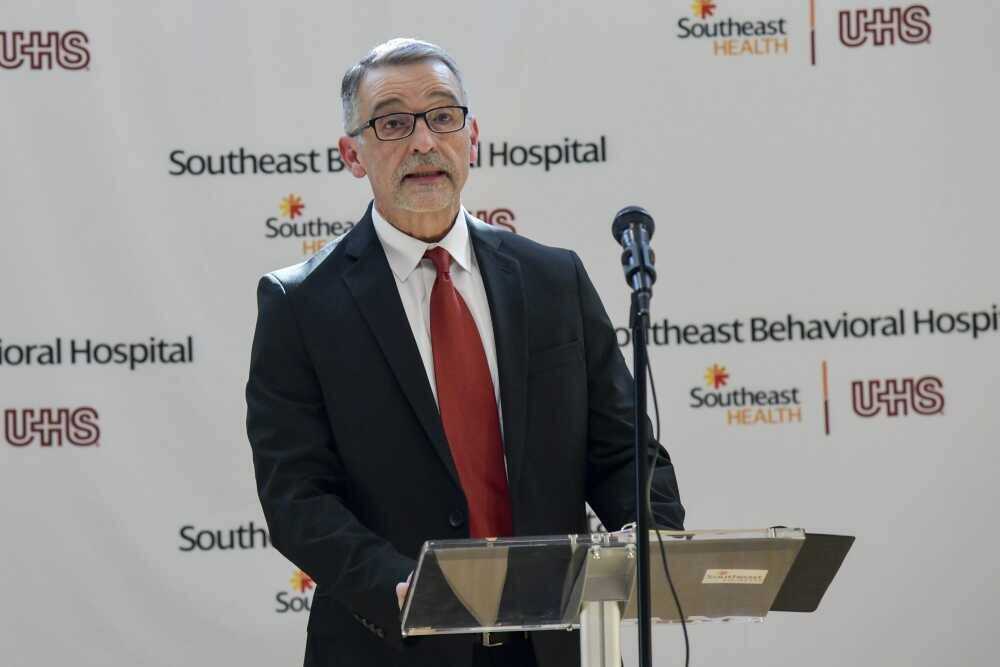 Cockrell got his start in health care at the age of 19. He was a nurse in a critical care unit before advancing into management, ultimately advancing to the role of chief nursing officer in Jackson, Mississippi — a position he held for nine years.

Other experiences include: serving as CEO of a rural hospital; working for Health Management Associates (one of the major U.S. health care organizations); leading psychiatric hospitals in Knoxville, Tennessee and Montgomery, Alabama; and right before coming to Cape Girardeau leading a 100-bed free-standing behavioral health hospital in Hazard, Kentucky.

Cockrell said the transition from nurse to a more focused career in behavioral health started about 20 years ago. While a nurse manager over an organ transplant unit, a former supervisor recruited him for a director-level position of which one of the reporting departments was a psychiatric holding unit.

“It offered no psych care,” Cockrell said. “That was back in the day when all the state facilities were full. So it’d be a four- to six-week waiting period to get a patient into a state facility. All I did was house those patients during that time. Gave them their meds and just housed them, but no group [interaction], no therapy, nothing along that line.”

In 1993, the operation had an opportunity to apply for a 30-bed psychiatric unit and Cockrell was tapped to open it. He’s overseen psychiatric care either directly or indirectly ever since.

Cockrell said he was recruited to lead the Cape Girardeau hospital. He liked the location, which was closer to some of his family in Mississippi. And he called the opportunity here “tremendous,” knowing there was a need in the community and surrounding areas.

Cockrell identified a few different trends in behavioral health, some present before the pandemic and others that could be exacerbated by the isolation many faced over the last year.

Anywhere he’s worked in the last 10-plus years, Cockrell has noticed an increase in patients with dual diagnosis — meaning they have a mental illness combined with a co-occurring substance abuse disorder.

“They kind of go hand-in-hand nowadays. And honestly, that’s what we’re seeing a lot of here.”

Which one leads to the other is up for debate.

“Are they so depressed that they’re using [drugs], or because they’re using that’s causing the depression? We are a psychiatric facility, so we have to treat primarily psychiatric issues. Now we do treat substance abuse as well, but we’re not primarily a rehab center.”

Another trend in some areas is multiple drug abusers living in the same household.

“You see generations, at least three generations of drug abusers living in the same household. Grandparent, parent, child, all of them using drugs.”

The big question: Once individuals with mental health issues and drug dependency issues are treated for the psychiatric issues, do they return to drug use or pursue better life choices?

“It’s kind of a mix, hopefully not. Hopefully you can you can teach them better coping skills, other alternatives as opposed to drugs. Typically we can stabilize them from a psychiatric side, but then they will need further treatment on the addiction side.”

Cockrell said there’s more depression among kids and adolescents these days, which was happening before the pandemic. But it was likely made worse when children were kept out of school.

“Kids were somewhat isolating themselves before [the pandemic] anyway because of the computer and social networking. But when they were truly physically isolated, it’s going to be interesting to see what the outcomes are from that.”

For some children, he said, school was their safe place, an opportunity to escape a troubled home life for six to eight hours a day.

One of his major projects is to recruit a child adolescent psychiatrist so the adolescent unit can be opened. Once that individual is on board, it opens the door to help more children. And for those with troubled home lives, social services can intervene to help find solutions.

Once the facility is able to ramp up services, Cockrell expects the hospital to have a “very close working relationship” with area schools. 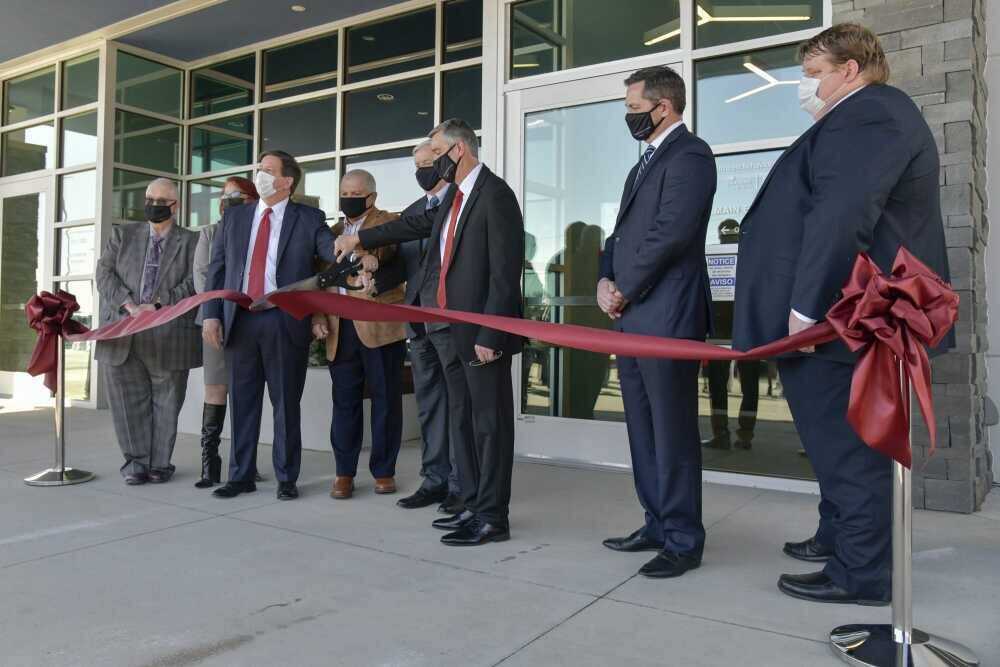 Like so many other organizations, recruiting employees is Cockrell’s biggest challenge.

About 70% of his staff are skilled professionals (nurses and social workers) with entry level positions making up most of the balance. Once at capacity, the facility will employ about 250 people.

Much like fast food restaurants are currently struggling to hire entry-level workers, Cockrell is also finding it difficult to hire individuals for entry-level roles. In fact, right before the facility opened he had a dietary manager hired but no cooks. As a backup, he and some of the other administrative staff took the food handler certification online so they could assist with food preparation if needed. Thankfully, it didn’t come to that point.

The national nursing shortage is part of the challenge, too. But Cockrell was encouraged, noting he had just hired nine nurses to join his operation.

Once fully staffed, the hospital will have six to eight providers — physicians, psychiatrists and nurse practitioners. In the meantime, they’re using a physician out of Poplar Bluff during the week and another out of St. Louis on the weekends.

Cockrell said in his experience the makeup of patient insurance is 33% Medicaid, 33% Medicare, 20% commercial insurance and 10% indigent or charity care.

“I don’t know if that’s what our makeup will be, but it’s going be somewhere around there. You can tweak it a little bit one way or the other.”

Tweaking it has something to do with the units open. Currently only two of the four units are operating. The geriatric unit, he said, will be the next one to open, and that will increase their Medicare numbers.

Missouri voters supported Medicaid expansion at the ballot box in 2020, but in the 2021 legislative session lawmakers did not authorize the funding mechanism to make the expansion possible. With the large number of people already on Medicaid in Southeast Missouri, Cockrell said it certainly could affect the new hospital.

When Cockrell talks about the need for a behavioral health hospital in this area, it’s in part based on the geography.

Cape Girardeau is strategically located between St. Louis and Memphis with only some access to similar services in Sikeston and Poplar Bluff. But as far as a facility with similar capacity and scope of services, there’s not really a comparable option unless you go north or south on I-55.

For involuntary commitments, some patients in this area have been sent to St. Louis as the nearest option with available beds. Once the Cape Girardeau facility is accredited, that will begin to change.

While most of the facility’s referrals have come from SoutheastHEALTH, Cockrell said they have received quite a few from Saint Francis, too.

The facility’s primary catchment area is the five surrounding counties, which covers about 200,000 individuals. But when you add secondary markets the hospital will cover 650,000 people in a 100-mile radius of Cape Girardeau.

The opening of the new hospital had its share of delays — some related to the pandemic, others being standard challenges of a major construction project. The rollout has been deliberately slow, also in part a byproduct of the pandemic and in part leadership’s focus on doing things the right way and slowly ramping up. Cockrell notes that behavioral health is not the most profitable segment of health care, but the need for these services is certainly clear to the hospital’s chief. And he believes the facility is poised for success and impact. 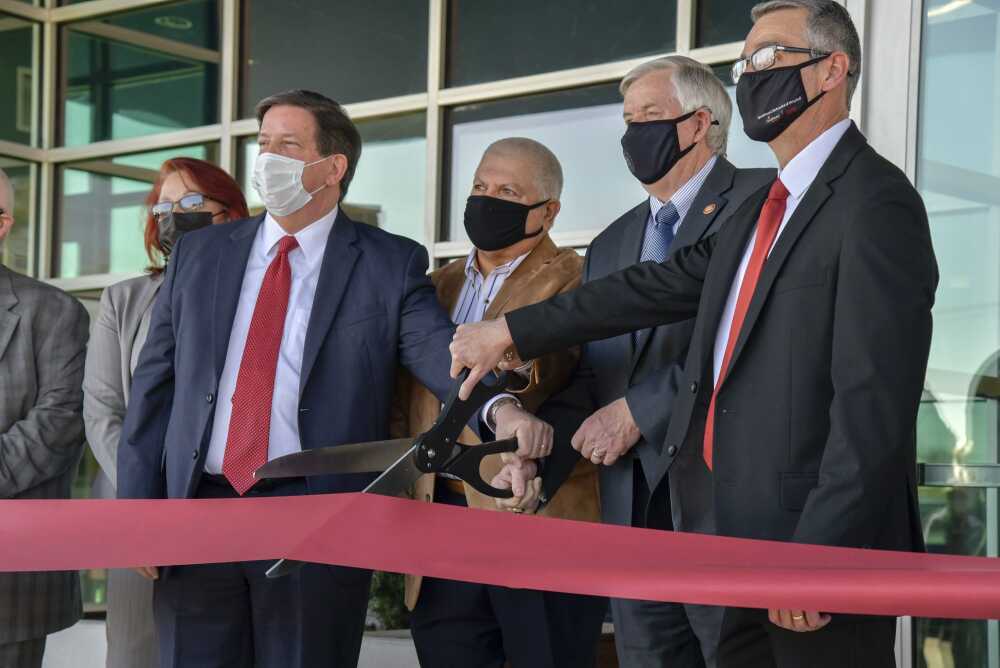 New hospital 'a win' for mental health patients
By Jay Wolz ~ Southeast Missourian
Calling it "a win for the state," Gov. Mike Parson joined with Cape Girardeau Mayor Bob Fox and representatives of SoutheastHEALTH and Universal Health Services to cut the ceremonial ribbon Tuesday at the new Southeast Behavioral Hospital. "This is really going to make a difference in people's lives," the governor said. "For too many years, and... 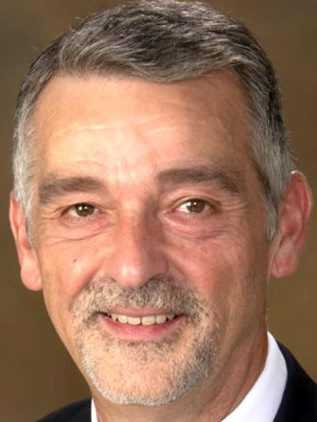 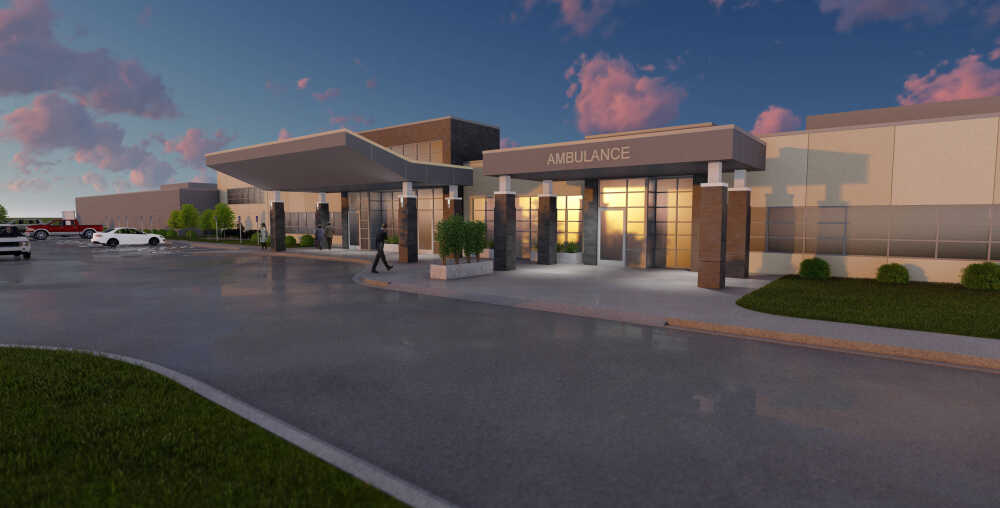 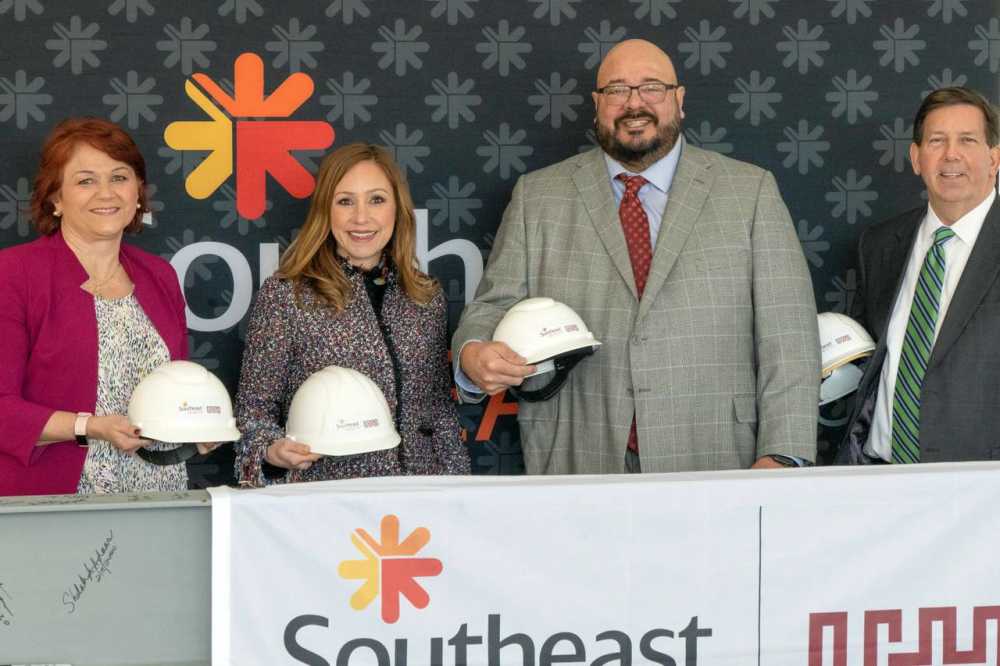 Construction milestone for behavioral health facility marked with beam signing
Southeast Missourian
In partnership with Universal Health Services, SoutheastHEALTH held a beam-signing ceremony Wednesday to celebrate a construction milestone for its new free-standing behavioral health facility at 639 S. Silver Springs Road, scheduled to open by year's end...
Psych hospital project moves forward in Cape
By Mark Bliss ~ Southeast Missourian
Plans to establish a $29.2 million, 102-bed psychiatric hospital in Cape Girardeau will move forward now that a state board has given its approval. The Missouri Health Facilities Review Committee unanimously approved the project Monday under the state's Certificate of Need law, which regulates the number of hospital beds a community may have and...
More to explore