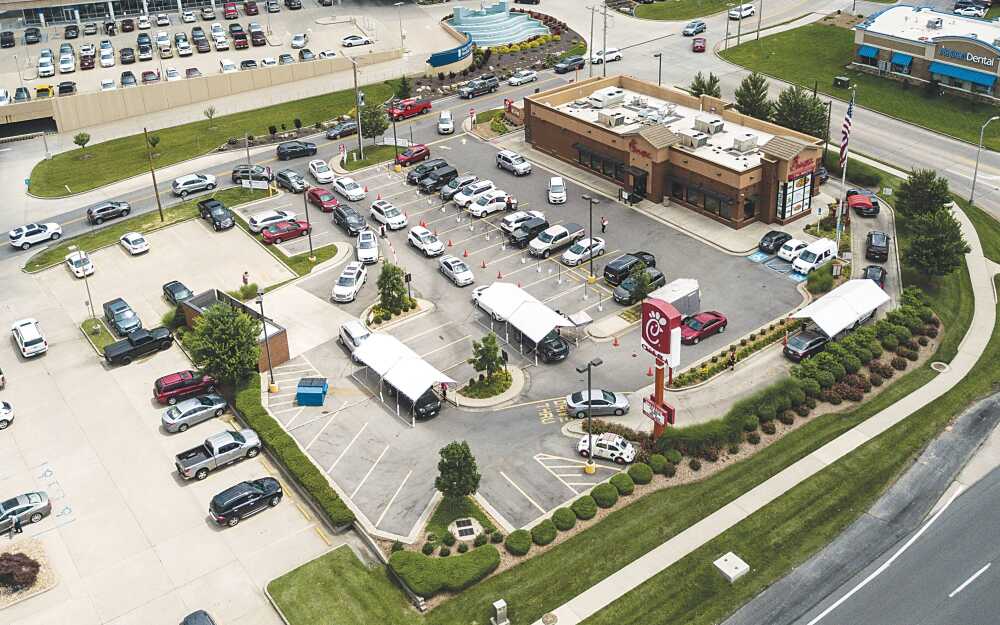 Cars back up onto Gordonville Road at the entrance to Chick-Fil-A in Cape Girardeau on June 10, 2021. The traffic jam is a regular occurrence between 11 am and 1 pm when the restaurant serves and average of 140 cars per hour.

Editor's note: On Thursday, July 1, Chick-Fil-A resumed carryout orders inside its Cape Girardeau restaurant following an extended period of only offering drive-thru service due to the COVID-19 pandemic.

Not many people may know Gordonville Road by name in Cape Girardeau, even though the largest employer in the county is located on it: Saint Francis Medical Center. Gordonville Road is less than a mile long and goes through two roundabouts. But if you’ve ever been to the Chick-fil-A there in the middle of the day, with cars congested in front of the hospital waiting to pull in for lunch, you’ve definitely experienced it. In fact, between 11 a.m. and 1 p.m., the fast-food restaurant will average 140 cars per hour, a dozen of them at any one time waiting on the road until they can turn in to the drive-through. The fact no one complains about the traffic is a testament to the popularity of the restaurant’s food, the efficiency of its staff and the likability of its franchise owner.

Brian House, owner, acknowledges he’s not the greatest neighbor when it comes to traffic, and for the past couple years he’s been seeking a solution. The arrival of the pandemic delayed his plans, but now he says he’s back on track with an expansion of the parking lot scheduled for early 2022. 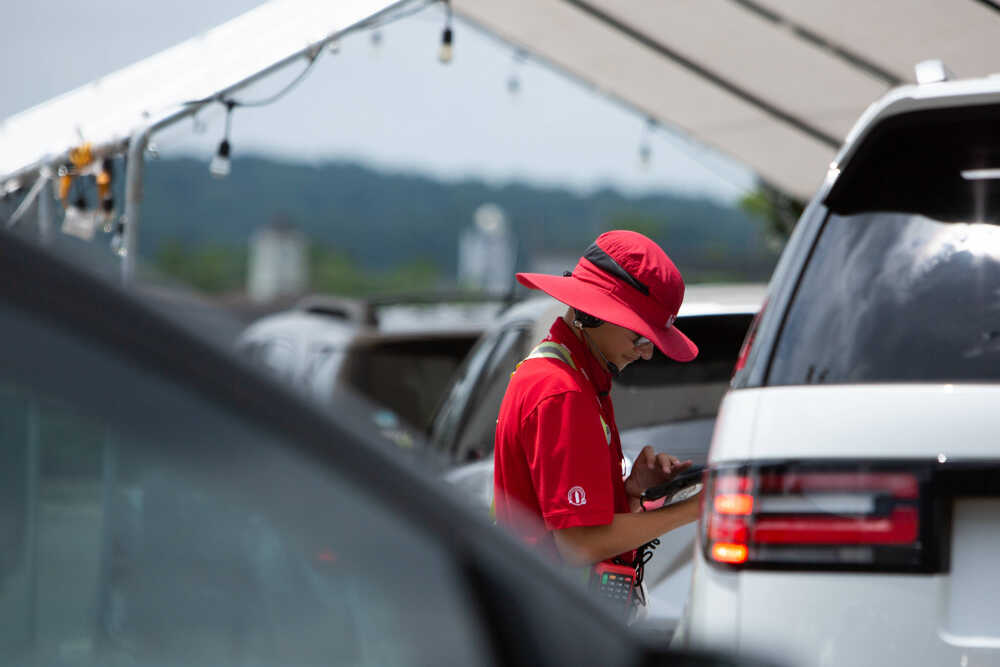 “We should have the property deal finalized the first quarter of next year,” House said. “Then we will expand the parking lot with the expectation that 90% of the current [spillover] will be eliminated.”

Whether that expansion happens before or after the return of in-door dining is still to be determined. But House has a bit of a challenge — the kind successful business people love: high demand. When the pandemic shut down indoor dining, his team took the opportunity to re-route the current parking lot and optimize it for remote ordering and pick-up, delivery and two lanes of drive-through. Lighted tents were set-up where guest parking used to be to provide a better environment for staff to take orders via digital tablets, which means even if House wanted to reopen indoor dining, it would be difficult without jeopardizing the drive-through efficiency. Meanwhile, without inside diners, the internal operation is fully focused on quick turnaround. 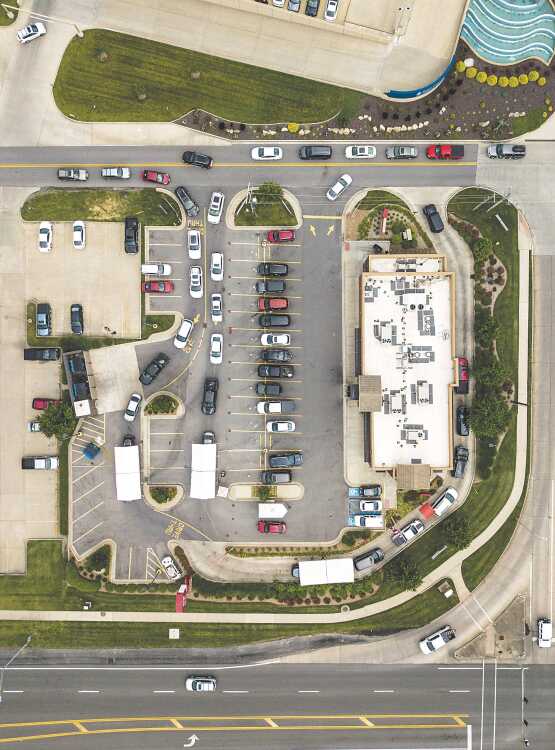 Cars back up onto Gordonville Road at the entrance to Chick-Fil-A in Cape girardeau on June 10, 2021. The traffic jam is a regular occurrence between 11 a.m. and 1 p.m. when the restaurant serves on average of 140 cars per hour.
Aaron Eisenhauer ~ B Magazine

According to House, even before the pandemic, more than 60% of his business was via drive-through. Now he has so many orders via app for curbside pickup or delivery — DoorDash, Uber Eats, Chick-fil-A’s personal meal delivery vehicles, etc. — that one person is dedicated all day to just making drinks for remote orders while a second one is dedicated to making the meals. Meanwhile, drive-through business has exploded. 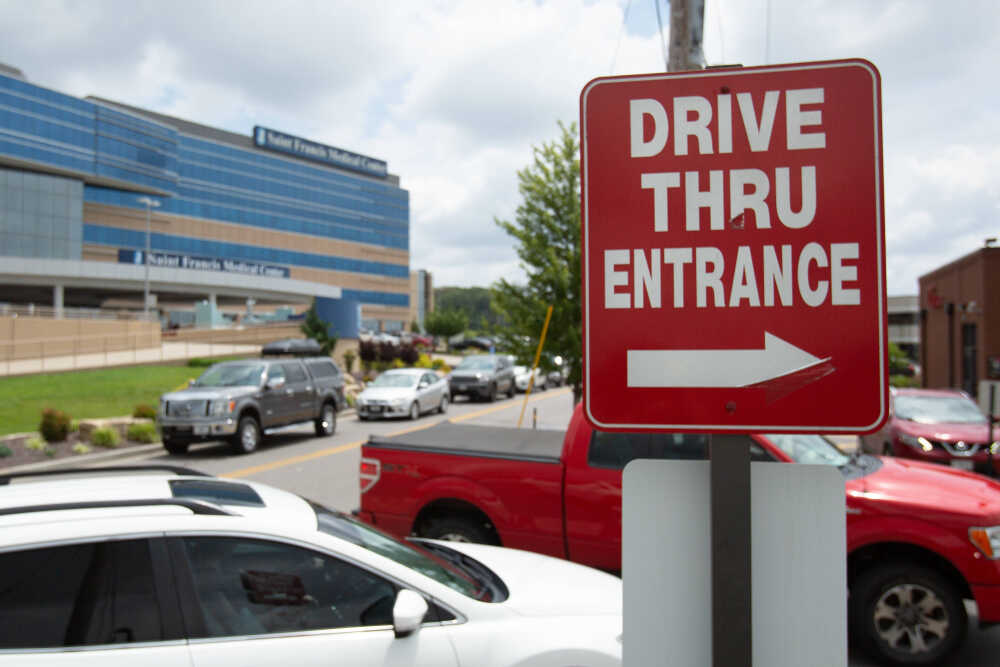 “Our guests have adapted to the new lifestyle and like having food brought to them,” he said. “They go home or to the office and they just enjoy eating in their own space.”

Meanwhile, House points out the complications if he were to reopen indoor dining before the parking and drive-through are expanded — and as long as the coronavirus is not fully eradicated. 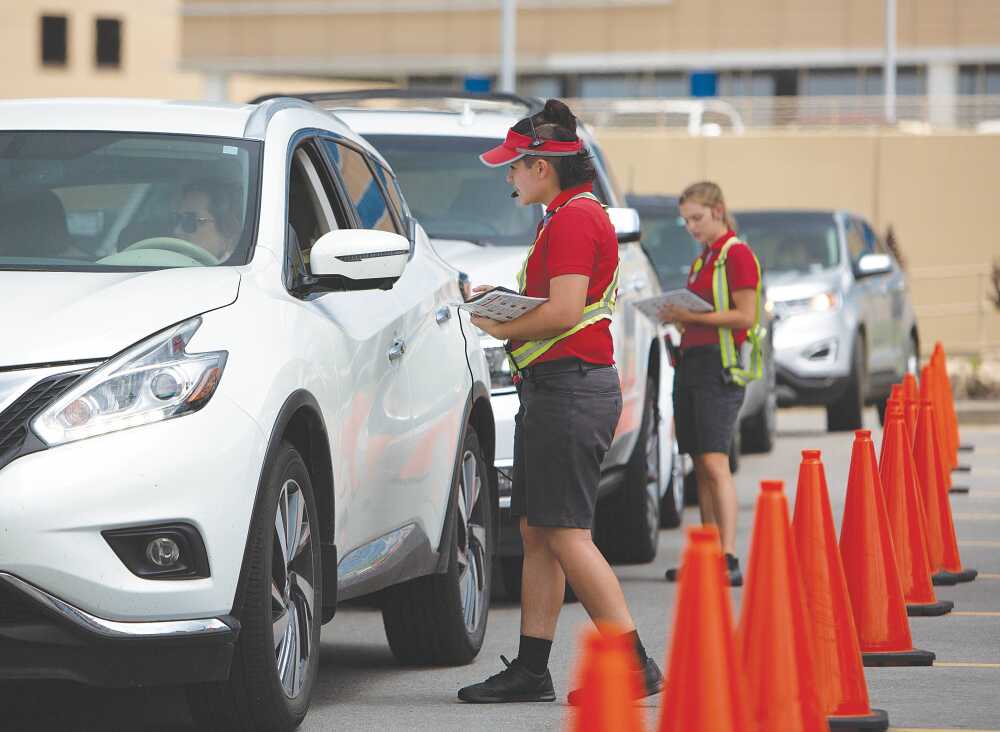 Elanor Monahan and Bonnie Hanners use tables to take a customer's order at the Cape Girardeau Chick-Fil-A. By using tablets, the employees can position themselves at the best place in the line to expedite the order. In addition, payment can be managed at the same time, speeding the process later. The employees also input a description of the car and request the customer's name, which enables personalization and helps to insurance the correct order for the customer.
Aaron Eisenhauer ~ B Magazine

“I’d have to limit my seating, dedicate more people to sanitizing the restrooms, which isn’t convenient, and I’d have to turn off curbside. I don’t have the parking for it.”

Still, there are aspects of indoor dining House and his team miss immensely.

“Building trust with guests is not the same without the personal interaction,” House said. “It’s been hard with all the changes to keep the guests connected. We can’t love on them the way we could when they came in. You can’t be as spontaneous with a free cookie or ice cream — or an offer to tour the kitchen. 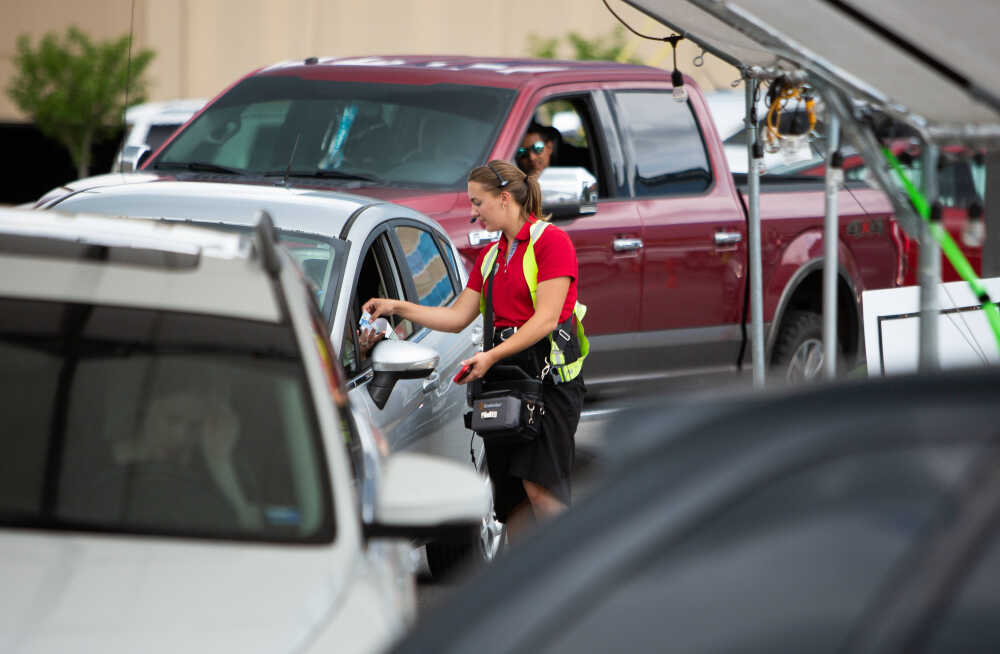 “Sometimes I think we miss the interaction more than our guests, because it makes our days better when we can put a smile on someone’s face.”

House explained the company’s “Acts of Random Kindness” philosophy, which is punctuated by small and unexpected gifts that delight customers.

“A lady started to cry [after receiving a free tea]. It was just a tea, but she said she was having a bad day, and it meant so much to her. We miss that,” House said.

Without indoor dining, Chick-fil-A has also not been able to conduct as many community fundraisers, which was another way for House’s team to connect with local residents. For example, in a typical year before the pandemic, the Cape Girardeau Chick-fil-A would raise more than $125,000 for teacher appreciation, Pink Up Cape, Rocking for Relief, various school spirit nights, Back the Blue, Raise the Red for Fire Department, and other fundraisers. The figure also includes $2,500 scholarships to team members of which 19 were awarded in 2019.

“We’re ready for those fundraisers to start back up,” House said.

A few years ago, before a leadership change at the hospital, there was tension around the traffic at Chick-fil-A, and concerns were expressed about ambulances being stuck on their way to the emergency room. And, in the early days after the restaurant opened in 2011, some EMTs from out of the area did get stuck. But the hospital contacted the providers throughout its large service area and emergency vehicles now know the best way to navigate the roads around the hospital without delays. 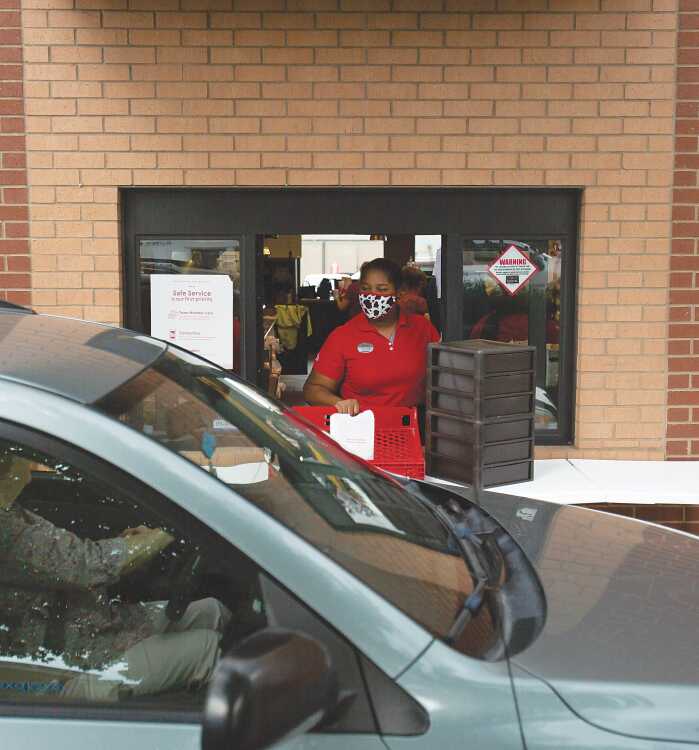 Diamond McWhorter slides a customer's order out the window of the Cape Girardeau Chick-Fil-A. According to national fast food studies, it actually takes a driver longer on average to get through the Chick-fil-A line than at most other fast food restaurants. However, Chick-fil-A might move three times the number of cars through its line in that slightly longer time. So, although longer in total time, it feels "faster" to the driver. The final step in the process, actually receiving the food at the window, generally only takes a few seconds as the employee confirms the customer's name then hands out drinks and food and salutation "my pleasure."
Aaron Eisenhauer ~ B Magazine

In fact, outgoing (and longtime) Cape Girardeau city manager Scott Meyer suggested the city was initially caught off guard by the sustained traffic.

“Usually, there is a big crowd at a restaurant opening,” Meyer said. “But with Chick-fil-A, it not only hasn’t waned, it’s grown. And that says a lot.

“We’re certainly aware of the challenges [with the traffic],” he continued. “But people have adapted to it, and we know Brian is actively seeking a larger solution.” Expected date: 2022. 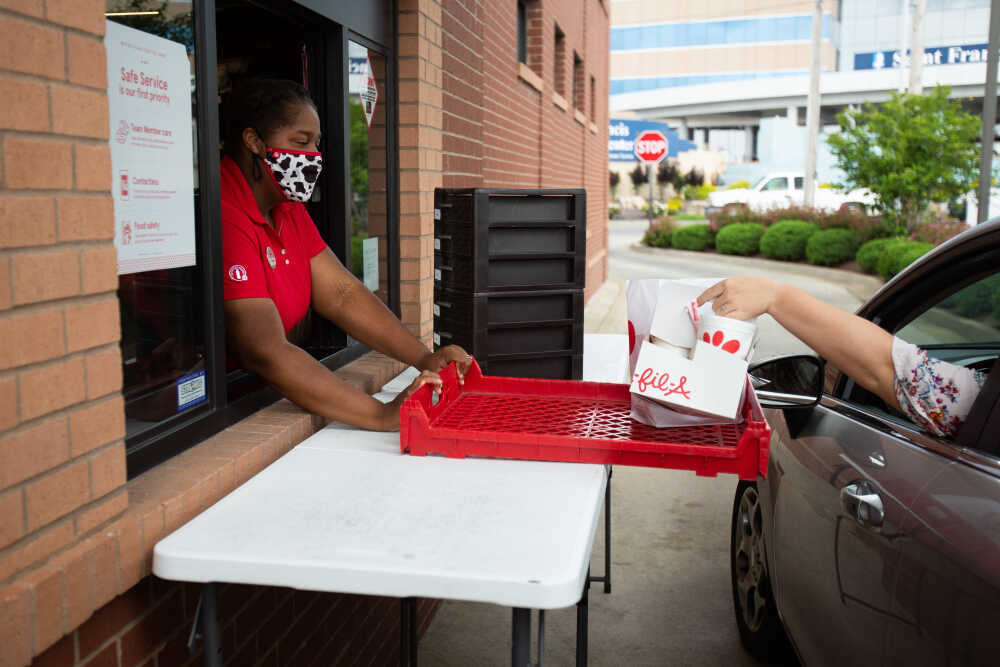