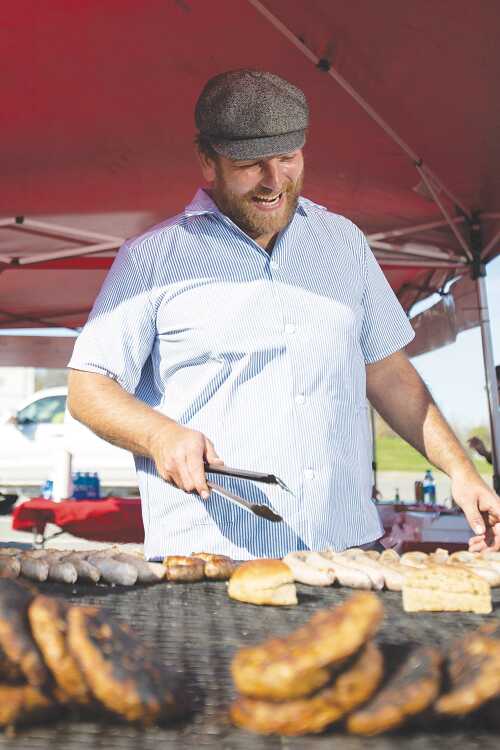 Christian Voigt, the German Cook, laughes as he tends the grill while he and his wife Crystal Voigt sell food at Jackson City Park.
Photo by Aaron Eisenhauer
Order this photo

Before he was The German Cook, Christian Voigt was a guide for a motorcycle touring company, leading groups of people across the U.S. on motorcycle adventures. Before she was The German Cook’s Wife, Crystal Voigt worked in Los Angeles at the company that rented the motorcycles to the agency Christian worked for. Two of Crystal’s coworkers who had known Christian for years encouraged her to go on a date with him, and the rest, as they say, is history. When their child was born, they decided to move back to Jackson, Crystal’s hometown.

“I grew up on a farm, and we had a huge garden; we were self-sufficient,” Christian says. “Everything was canned — the basement was full of cans, and my grandpa showed me how to butcher. When I was five or six, I butchered my first pigeons and chickens, and then at nine, 10 [years old], I butchered rabbits. … I grew up with grandmas, parents, everybody cooked well.” 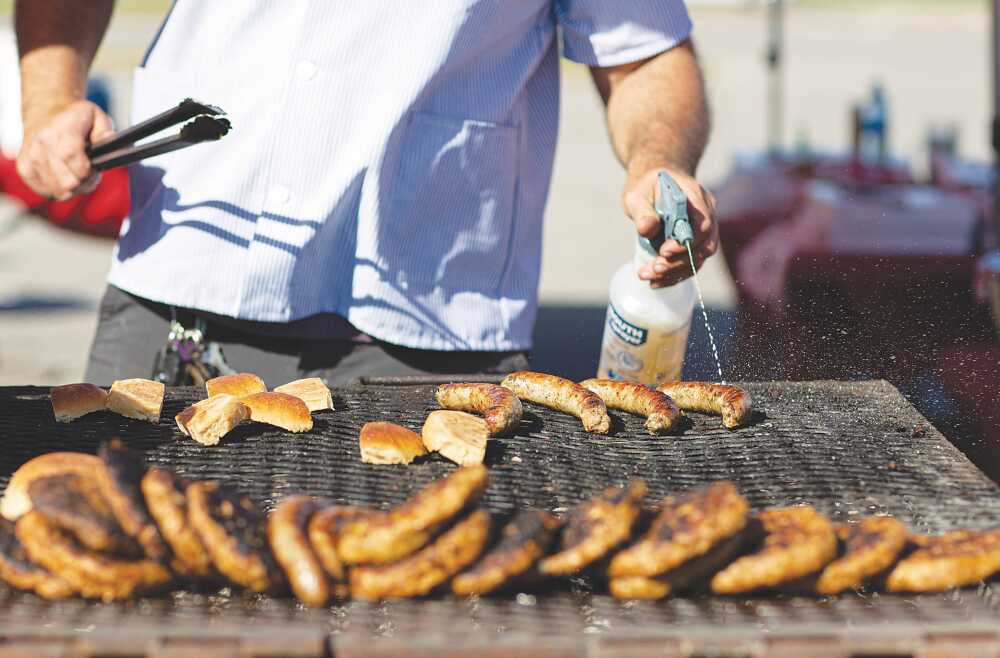 Christian Voigt, The German Cook, gives bratwursts a spritz of Stag beer as they cook on the grill at Jackson City Park.
Photo by Aaron Eisenhauer
Order this photo

These experiences are the foundation for everything Christian and Crystal do with their food today. Christian believes in making food from scratch and eating fresh and seasonally. Additionally, the herbs and spices he uses come from Germany, so his food tastes like the region he is from.

A passion for cooking and sharing the food from the region of his birth inspired what began as a hobby and has become a livelihood for the Voigt family. As members of the Jackson Revitalization Organization’s Oktoberfest planning committee, in 2016, Christian decided to make brats for the event, donating the proceeds back to the organization. It was a success. The next year, they decided to sell brats at the festival again as The German Cook, and in 2018, they began setting up at the farmer’s markets in Cape Girardeau and Jackson. In 2020, they both decided to make The German Cook their full-time gig. Next up, they have plans to open a restaurant on Highway Y in a pasture with a walk-out basement next to a lake; Crystal says the open date is at least a year off.

A natural people person, Christian grew up watching his grandpa tell jokes and “being open to people;” following his example, Christian loved to entertain from a young age and sang in the choir for 12 years throughout his schooling. It’s a trait he loves implementing while he’s cooking, joking and “goofing around” with customers while they wait for their food.

When interacting with customers, he often quickly switches between joking and deeper conversation; he says he enjoys hearing people’s different opinions and learning new information, and he enjoys the fact that since he lives here now, he can listen to what people have to say and also offer his own opinions. He encourages others to plant a garden, get outside and connect with neighbors, learning from the people around them.

“People are super interesting, and everybody has a story to tell,” he says.

“Now, that’s not what you told me last time I asked a question,” jokes a customer who is waiting in line.

Christian smiles as he takes the brat off the grill and places it on the bun the customer is holding.