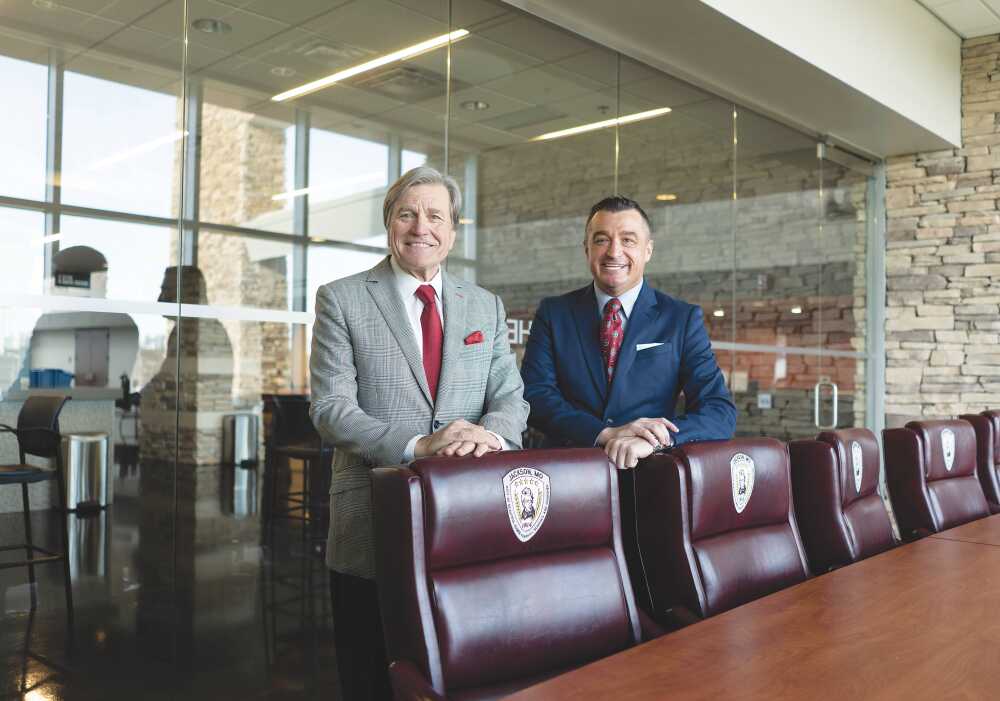 Dwain Hahs, mayor of the City of Jackson and Brian Gerau, president and CEO of the Jackson, Missouri Area Chamber of Commerce.
Aaron Eisenhauer ~ B Magazine
Order this photo

As Jackson continues to thrive, area leaders say a solid public-private partnership and various initiatives have helped set up the city for years of growth.

Brian Gerau, president and CEO of the Jackson Area Chamber of Commerce, said the organization he leads and City of Jackson have “parallel visions and strategies” in the current and future growth of Jackson.

“Our joint vision is progress through growth of Jackson while maintaining the traditions of our small-town community,” added Jackson Mayor Dwain Hahs, an international business executive before returning to Jackson in his retirement.

Gerau, who has been at the helm of the Jackson Chamber since 2008, said both entities have a vision of city enhancement via infrastructure, public safety and retail recruitment.

“The chamber and the city have partnered on several initiatives to make sure that Jackson is growing and prepared for the next 10 years,” Gerau said.

Some other initiatives the two have teamed up on include developing land for future projects, advocating for local businesses, recruiting industrial organizations and representing Jackson on several area associations.

Hahs said regional cooperation has been key to Jackson’s success.

“Within our region, we have excellent regional working relationships between the cities and counties,” Hahs said. “A rising tide floats all ships, and the regional economic development initiatives are important to the growth of Jackson and the surrounding cities.”

The City of Jackson has a diverse economic base, which is “vital to retainment and expansion,” Gerau said. The city has a varied economy, from health care and manufacturing to agriculture and retail, so the overall economy doesn’t depend on one single industry.

Hahs, who was recently re-elected, said Jackson also offers diverse housing options from homes to duplexes to apartments that will meet the varied income levels and lifestyles of residents.

“This housing diversity mirrors our business diversity, which covers different types of manufacturing, retail, hospitality and service, including our medical facilities,” he said.

Gerau said Jackson’s public and faith-based school systems provide a multitude of benefits back to the community, and educational leaders are “extremely invested in the city and the Chamber of Commerce as a partner in our success.”

“The school system is the heart and soul of Jackson, Missouri,” Gerau said. “Not only is it one of the major employers of our town, but it is the key economic development tool.”

Gerau said one driving factor in the success of both the chamber and city is accessibility to leadership. Hahs and Gerau said they have an open-door policy and are easily reached and active in the community. It’s their goal to communicate strategies and initiatives to constituents and members.