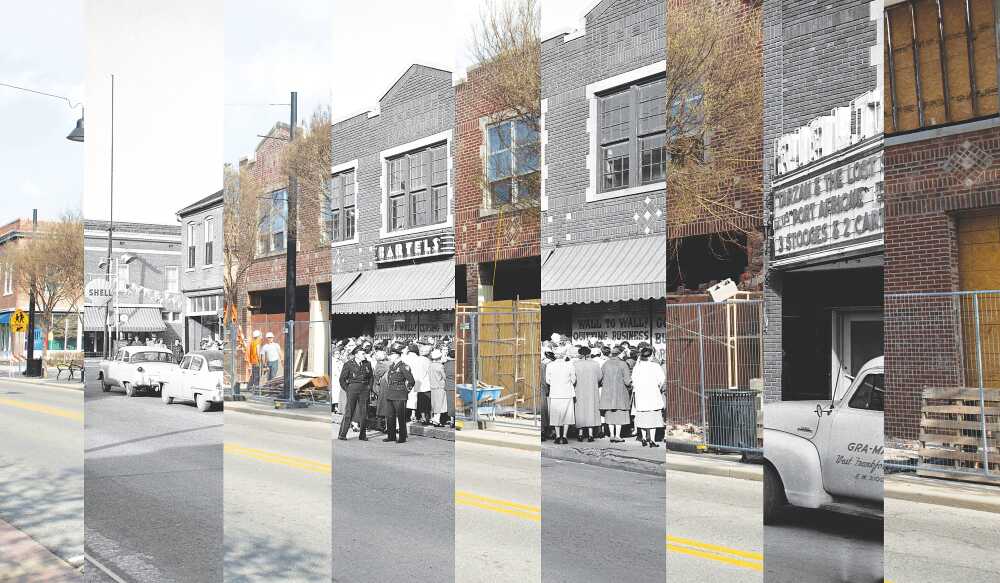 On Thursday, November 21, 1957, shoppers crowded into Bartels Store for the first day of its going out of business sale. The building at 430 Broadway, which was built in 1928, is now undergoing major renovations.
Illustration by Aaron Eisenhauer ~ B Magazine
Order this photo

The following story appears in the upcoming Progress edition of B Magazine, which will be inserted into this weekend's Southeast Missourian. To have B Magazine mailed to your home or office six times per year, visit www.bmagazine.io/subscribe.

It’s often said we live in a disposable society — a culture in which everything is destined for obsolescence. From appliances to automobiles, lumber to lawn mowers and socks to software, everything we make, purchase or use begins wearing out from the moment we build it, buy it or drive it off the lot.

The same holds true for residential and commercial buildings, which are often designed to last only a few decades before they’re replaced with modern structures constructed to mirror current architectural designs and building trends. Other buildings are built to last.

In a sense, these buildings represent a community’s tangible history, connecting a city’s past with its present. With that in mind, many communities, including Cape Girardeau and Jackson, are working to preserve their architectural history through various historic preservation efforts. 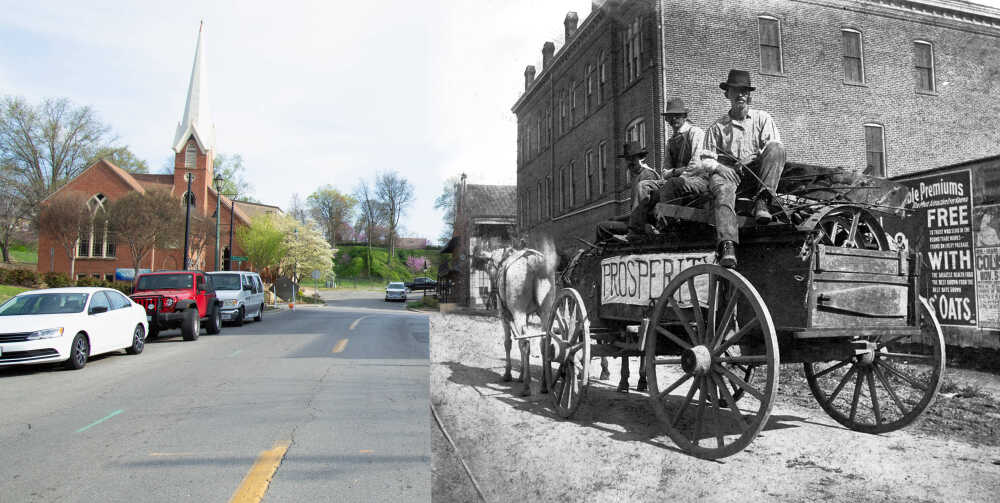 Three men travel on Spanish Street with a sign reading "PROSPERITY" in a photo circa 1901. The Masonic Hall and Kage House behind them still stand today.
Illustration by Aaron Eisenhauer ~ B Magazine
Order this photo

But too often structures that are deemed to have historic significance fall victim to neglect. Others are damaged or destroyed by floods, fires or other disasters. Case in point, the 100-year-old Broadway Theatre, considered by many to be a significant Cape Girardeau landmark, was severely damaged by fire March 31.

The Cape Girardeau Historic Preservation Commission is responsible for tracking an inventory of historic properties within the city and this spring is compiling its 10th annual list of endangered buildings.

Meanwhile, Jackson’s Historic Preservation Commission is scheduled to complete work this summer on a list of “historically significant” properties in and adjacent to the uptown Jackson business district. 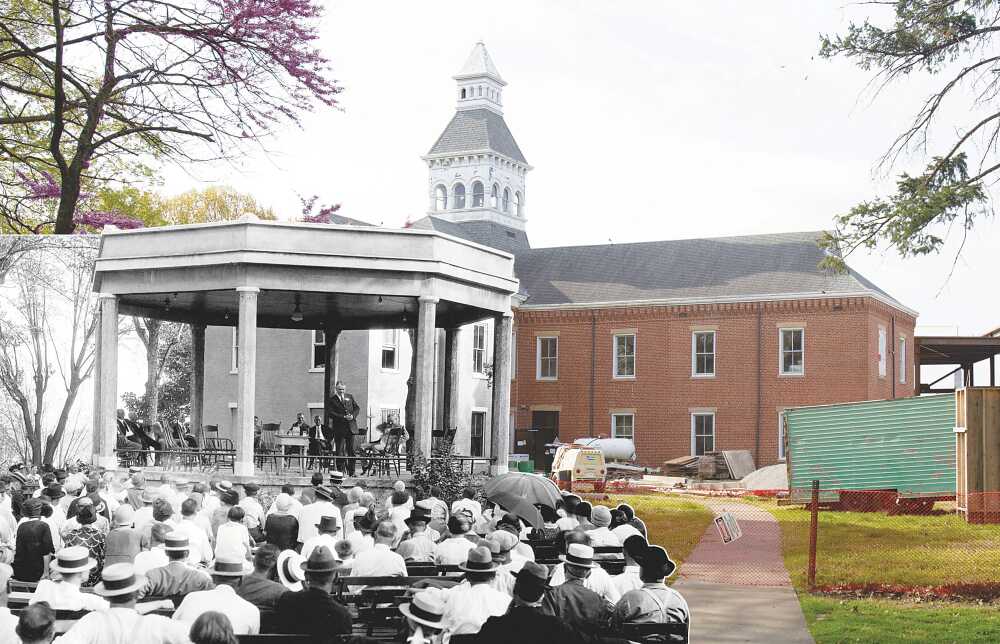 Speakers addressed a crowd from the gazebo at Common Pleas Courthouse in what is now Ivers Square during the Southeast Missourian Building dedication, Sept. 12, 1925. The Gazebo was constructed in 1913 as a bandstand and has been altered and refinished over the years, as has the courthouse, which is currently undergoing extensive renovation.
Illustration by Aaron Eisenhauer ~ B Magazine
Order this photo

“These buildings are tangible reminders of our city’s past,” he explains. “Each one tells a story about what life was like in a particular chapter in the city’s history. Many of them reflect unique architectural designs and methods of construction that are no longer used.”

In Jackson, work began on a historic architecture survey — the third such survey in the past 40 years — last fall and is targeted for completion this summer.

“We’re probably looking at late July if we stay on our time schedule,” according to Jackson planning supervisor Janet Sanders.

Once complete, the survey will indicate if there are properties that could be eligible for nomination to the National Register of Historic Places. Registration of those structures could make them eligible for rehabilitation tax incentives. In addition, maintaining lists of historically significant properties can help communities such as Jackson and Cape Girardeau qualify for certain grant funding opportunities.

One example of potential economic development, Shrimplin said, is taking place at 101 William St. in Cape Girardeau, a century-old vacant warehouse at the south end of Main Street. Developer Brennon Todt acquired the one-story brick structure in late 2020 and plans to renovate it with the help of tax increment financing into a “downtown destination” with restaurant and retail tenants.

When this article was written in early April, the commission had not yet finalized this year’s list; commission members were scheduled to review the nominations at an April 21 meeting and decide which buildings qualified to be placed on an “endangered” list and which should be put on a “watch” list.

The Historic Preservation Commission released Cape Girardeau’s first endangered buildings list in 2012. The list identifies Cape Girardeau properties which, according to the commission, are “worthy of preservation but are at risk due to physical damage and/or long-term vacancy.”

Topping the list of nominations for this year’s endangered structures list was the former Hecht’s Department Store building at 107 S. Main St. After opening in 1917, the building was renovated in 1927 to include elements of French architecture intended to allude to the store’s connection to the Paris fashion industry. The store closed in 2004 and, according to its nomination document, has lacked consistent ownership and proper maintenance since then which has, in turn, led to the building’s deterioration.

In addition to the Hecht building, other structures nominated for inclusion on either the city’s endangered or watch list for 2021 were:

621 Good Hope St. This is a two-story commercial building dating to 1875 in the Haaring Commercial District, known for its German immigrant population in the mid- to late 19th century. According to its nomination form, the building has exposed brick from peeling paint, cracked mortar that is causing brick to fall inside and shattered/missing windows.

43 N. Hanover St. A single-family one-and-a-half story home built in 1950, this structure is an example of typical housing built in the years just after World War II. The structure, according to its nomination documentation, is in need of cosmetic repairs. 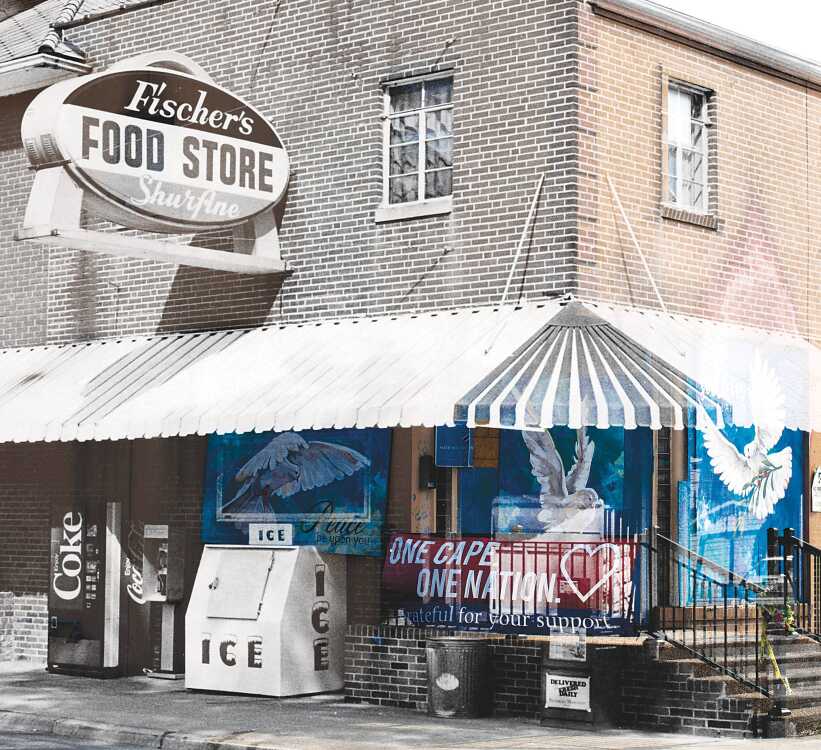 Fischer's Food Store remained open for more than 50 years before closing in 1987. The building eventually became home to the Islamic Center of Cape Girardeau. In April of 2020, the building was damaged by an arsonist, motivated by hate.
Illustration by Aaron Eisenhauer ~ B Magazine
Order this photo

227 S. Lorimier St. This is a one-and-a-half story house dating to 1850 a couple blocks south of Independence Street near the Southeast Missouri State University River Campus.

320 Broadway. This is the 97-year-old Surety Savings and Loan Association Building and is an example of the Spanish colonial revival architectural style. It has been listed on the Historic Preservation Commission’s watch list.

1 North Main St. Once the home of F.W. Woolworth’s downtown location from 1914 until 1977, this two-story structure on the corner of Main and Independence streets has housed a variety of businesses, including an art gallery, an antique mall, a furniture store and a pizzeria.

Depending on their ranking by the Historic Preservation Commission, some, but probably not all, of the structures nominated this year will be added to a list compiled in previous years.

Some buildings that were on the list last year have been deleted because they have either been demolished in recent months or plans are in place to renovate them. Other structures could be dropped from the list if some of this year’s nominated buildings are deemed to be in greater need of preservation or renovation than those on the 2020 list.

Shrimplin said he and the commission typically prefer to keep no more than 20 to 30 structures on the list from year to year.

Broadway Theatre, 805 Broadway. Listed as one of Cape Girardeau’s endangered buildings annually since 2012, the Broadway Theatre was heavily damaged by fire March 31, but as of early April, plans were still in the works to renovate and repurpose the century-old movie house. 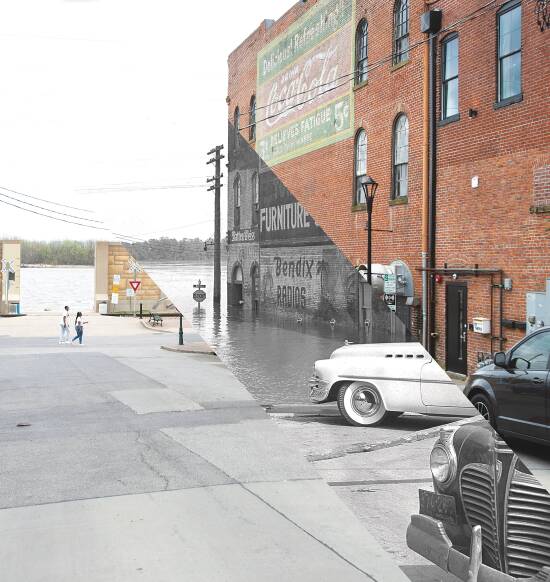 The floodwall on the Mississippi River in Downtown Cape Girardeau was not completed and dedicated until 1964, leaving buildings like this one, which housed Batten-Weiss Furniture Co. and is now home to Port Cape, susceptible to flooding. Original photo by G.D. Fronabarger, published July 26, 1951, in the Southeast Missourian.

127 S. Lorimier St. Deteriorating and apparently vacant, this two-story single family brick home has been on the city’s endangered buildings list since 2013.

635 Good Hope St. A two-story commercial structure, built in the 1880s as a saloon, had been vacant for many years. Located at the corner of Good Hope and South Sprigg streets, the aging structure was added to the endangered buildings list in 2013. It was demolished in January.

230 S. Middle St. Built around the turn of the 20th century, this one-story craftsman house has been on the endangered buildings list since 2016.

611 S. Sprigg St. This is a two-and-a-half story brick house on the southwest corner of Sprigg and Highway 74 a few blocks west of the Bill Emerson Memorial Bridge. The house was on the endangered buildings list since 2017 but was demolished in 2020.

831 North St. This example of the colonial revival architectural style is on the corner of North and North Pacific streets adjacent to the SEMO campus. Deteriorating rapidly because of missing roof shingles, peeling paint and missing brick mortar, it has been on the endangered buildings list since 2017.

207 N. Henderson Avenue. A two-and-a-half story residence, built around 1900, this structure has been on the endangered buildings list since 2018. The house features brick arches over double-hung windows and limestone lintels, but is deteriorating due to apparent lack of maintenance.

531 N. Fountain St. This house, built in the late 1800s or early 1900s on the corner on the corner of North Fountain and Mill streets, is one of the few remaining examples of Spanish colonial revival architecture in Cape Girardeau. The structure has been on the endangered buildings list since 2018.

1925 Good Hope St. This unique residence features a Quonset hut with a rectangular, flat-roof addition. Named after Quonset Point, Rhode Island, where they were manufactured for the military during World War II, surplus Quonset huts were sold to the public after the war. The one on Good Hope has been vacant for several years and has been on the endangered buildings list since 2019.

629 Good Hope St. A three-story brick structure built in the 1880s, this building has housed a number of businesses over the years including a hotel, a feed store and a bar. The upper stories have been configured into apartments that appear to be at least partially occupied, but demolition of an adjoining structure several years ago has exposed part of the building to the elements, making it vulnerable to deterioration. It was added to the endangered buildings list in 2020.

May Greene School, 1000 S. Ranney Ave. Located just south of Fort D, May Green School was built in 1920. Originally known as South Grade School, it was renamed in honor of a prominent teacher and was the first school in the area to become integrated when white students were reassigned to May Greene in 1953 after their school on Merriwether Street was destroyed by fire. May Green was closed in 1999 when Blanchard Elementary School opened on North Sprigg Street. The structure was added to the endangered buildings list in 2020.

This year’s endangered buildings list, as well as the lists from previous years, can be found on the city of Cape Girardeau’s website, cityofcapegirardeau.org.