Life is Sweet: Maple sugaring with the Gihring family 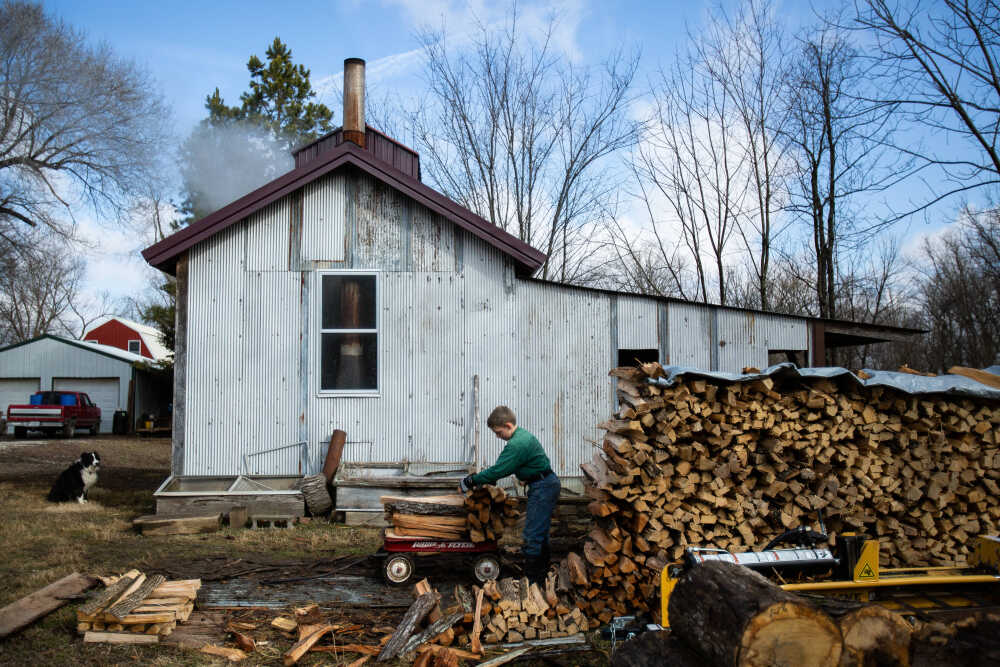 Jedidiah, 10, stacks wood into a wagon to be hauled into the evaporator house where it will be fuel to boil the maple sap into syrup at Gihring Family Farm on Saturday, February 27, 2021.
Aaron Eisenhauer
Order this photo

I step into the Sugar Shack, a small, wooden building at the edge of the driveway of Mark and Christal Gihring’s home near Altenburg, Mo. Outside, the temperature is in the forties during early March, and inside, with the wood-burning fire, it is warm. Sap bubbles in the long, rectangular evaporator, brown boiling down to reach 66% sugar, thin. The light coming in from the framed window lets you see the hazy smoke settling in the sugar air. Breathe in. It smells like maple.

I am at the Gihring’s family farm, where they make maple syrup from the sap of the maple trees across the more than 300 acres of land they own. The farm came to Mark’s family when his mother’s first husband passed away; it had been in his family since the 1880s. This year, the Gihrings tapped approximately 650 trees and made close to 150 gallons of maple syrup, a low amount for the number of taps they put out, due to squirrels chewing through the lines. Christal says with the number of trees they tapped this year, they should have collected approximately 200 gallons of syrup if it hadn’t been for the squirrels.

No matter how much the trees make throughout the season, enjoying their product is a family pastime.

“I think it’s neat to see something come from a tree and go all the way to your table and use it,” Christal says. “We use it everyday. It sets on the counter and gets used in something every day.” 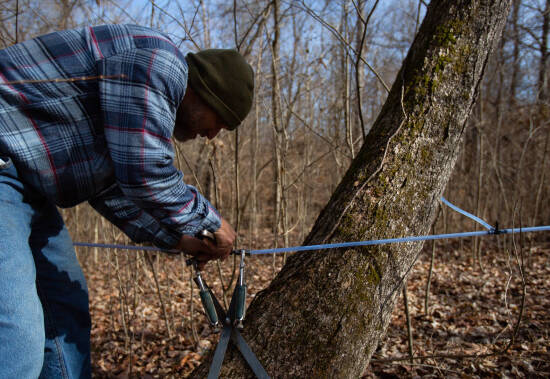 Mark Gihring checks the lines where he taps maple trees in his woods. This year, the Gihrings tapped approximately 650 trees on their 300 acres.
Aaron Eisenhauer
Order this photo

Mark, a science teacher and school bus driver, loves maple syrup; Christal says it was their family’s one splurge each week at the grocery store before they started making their own. Because of his love for the syrup and his father’s love for it, the Gihrings began maple sugaring in 2009, when Mark realized they had many maple trees on their property and could try their own hand at the process. That year, they purchased 20 spiles and boiled the sap in iron kettles. Each year, they tapped a few more trees. Now, with more than 600 tapped trees, they have a line system that goes between each tree and carries the sap to a central collection point.

Throughout the years as they have expanded their operation, they have taught themselves about the process through online research and by connecting with other people throughout the region who know about maple sugaring. Christal says the profit from the syrup helped her to be a homemaker while raising their four children; now, she also works part-time at an accounting firm. 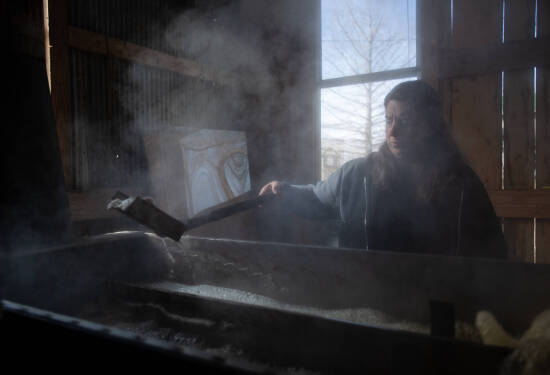 Christal Gihring skims foam from the top of the boiling sap. The maple sugaring season begins in early January and lasts six to eight weeks.
Aaron Eisenhauer
Order this photo

The maple sugaring season begins in early January and usually lasts six to eight weeks, depending upon how often the temperatures freeze. Mark says the freeze-thaw cycle creates the pressure that makes the sap flow, and as the season progresses, the syrup gets darker due to more amino acids and minerals present in the sap. The flavor, too, changes, from sweet and mild to rich and robust. It is a labor-intensive process: A 50-gallon barrel of sap makes one gallon of syrup.

For the Gihrings, maple sugaring is a family endeavor: The Gihrings’ four children help cut and stack wood for the evaporator’s fire, collect sap in the woods and do other chores around the house during maple sugaring season while Mark and Christal are in the sugar shack boiling the sap. It’s a process Jedediah Gihring, 10 years old and the youngest of the Gihring children, says he enjoys.

“Well, we’re outside most of the day, and [we] get to collect sap with [Dad], go out in the woods. And sit in [the sugar shack],” Jedediah says of what he likes about the process. 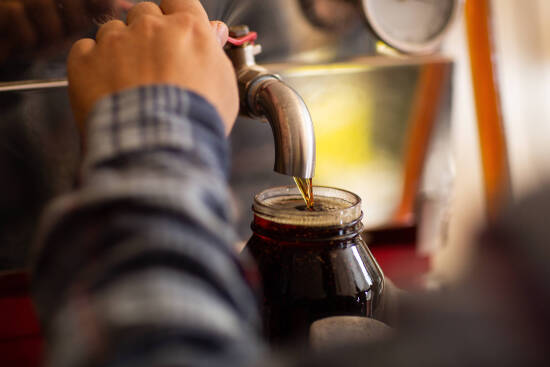 Mark Gihring fills a jar with pure maple syrup that he and his family produced on their farm. The Gihrings' trees produced close to 150 gallons of maple syrup during the 2021 season.
Aaron Eisenhauer
Order this photo

Trees can be tapped according to their size; bigger trees can be tapped two or three times in one season. Christal compares the trees giving sap to humans giving blood: She says a tree can give a certain percentage of sap and then heal its tap hole each year, enabling it to give sap again in the future.

After the sap is collected from the central collection point, the Gihrings bring it in a tank to the sugar shack, where a reverse osmosis machine pulls half of the water out of the sap before they cook it, making the process more efficient and using half of the firewood they normally would. After the sap reaches 66% sugar, which they measure with a hydrometer, they put it in jars and seal it. Then, it’s ready to eat or sell. 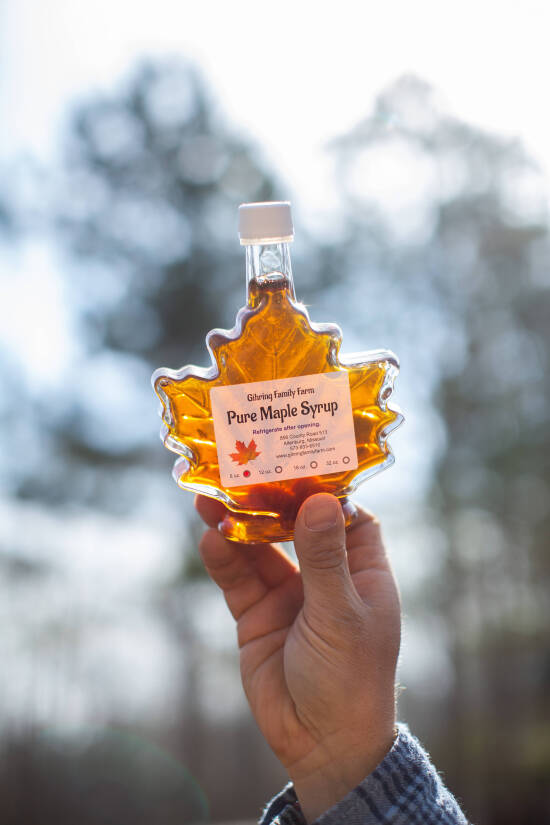 Mark Gihring holds up a bottle of pure maple syrup produced by him and his family at Gihring Family Farm outside of Altenburg, Mo., on Saturday, Feb. 27, 2021. The family has been producing maple syrup on their farm since 2009.
Aaron Eisenhauer
Order this photo

Mark says one of his favorite parts of maple sugaring is having other people enjoy something he makes. Within this process, he says he has little control over how it tastes — that is dependent upon the weather and soil. He enjoys, however, curating what the earth provides.

“What do I enjoy the most? Just producing something that’s so good yourself,” Mark says. “I like being in the woods. I mean, there’s something very relaxing about being out here, just completely — I say by myself — with the family. I like that part of it because a lot of the times, I’ll be working [to collect the sap], and the kids will just be off exploring. And the syrup is just so good.”

Reach out to Mark or Christal Gihring at gihringfamilyfarm.com.