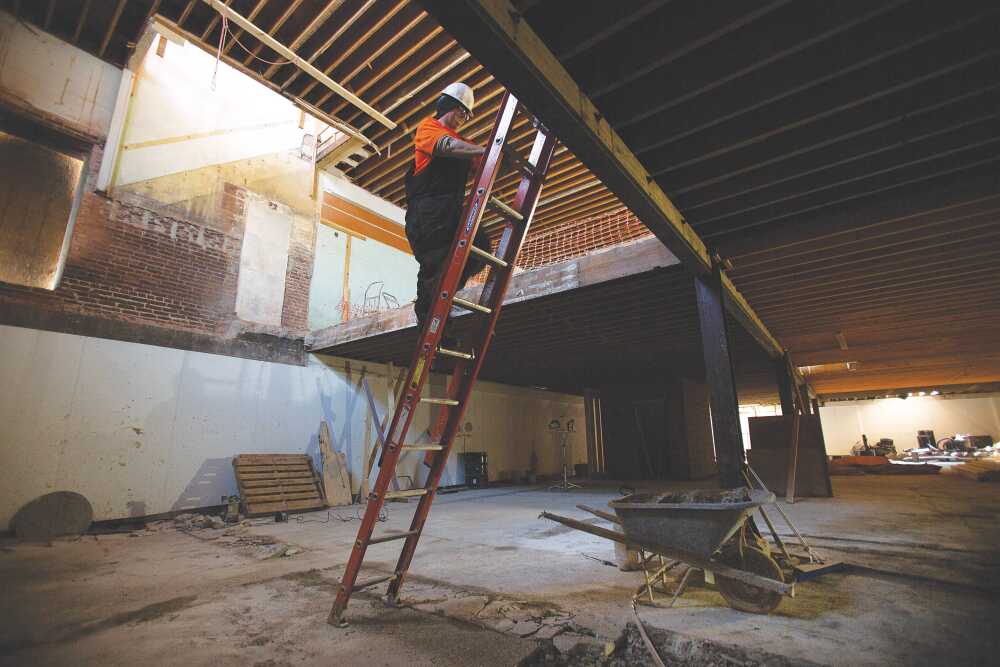 Work continues on the development at 430 Broadway, a mixed-use building that will be home to Speck, among other businesses.
Aaron Eisenhauer ~ B Magazine
Order this photo

As you travel down Broadway in downtown Cape Girardeau, in the span of just over one block, you’ll likely notice a change in location for one boutique, storefronts that are ready-to-lease and construction progress peaking through scaffolding.

A hamburger joint that features a creative festival of tastes; an Italian pizza and street food destination restaurant that emphasizes clean, organic ingredients and bold flavors; and a women’s clothing boutique specializing in affordable, on-trend fashion, are three of the four businesses scheduled to open mid- to late-summer inside the Rialto Retail and Residential Development at 430 Broadway. The basement includes a multi-use space while the top floor of the three-level development features six large, upscale apartments — each with a garage space.

It’s a $6 million project, made possible in part by Tax Increment Financing (TIF), which Rex Rust, the project’s managing director, describes as a “commitment to the community, especially downtown.”

“We wanted to convert an empty, blighted asset, kind of an orphan property, into something special,” Rust told B Magazine. “It’s really going to be spectacular.”

The project is named after the Rialto Theater, which operated from 1940 until the early 1980s at one end of the property, and it’s something Rust has been building out in concept for several years. Now, with construction fully underway, it’s “almost like watching a child grow,” he said.

Speck Pizza + Street Food and Kenny’s Flippin Burgers will anchor the project, along with Brickwood Boutique, a women’s clothing store. As part of Speck, outdoor patio seating will be available along Broadway in front of The Bank of Missouri branch. Parking won’t be a problem, Rust said, with the addition of about 80 off-street parking spaces within the boundary of the 1.73-acre redevelopment area. 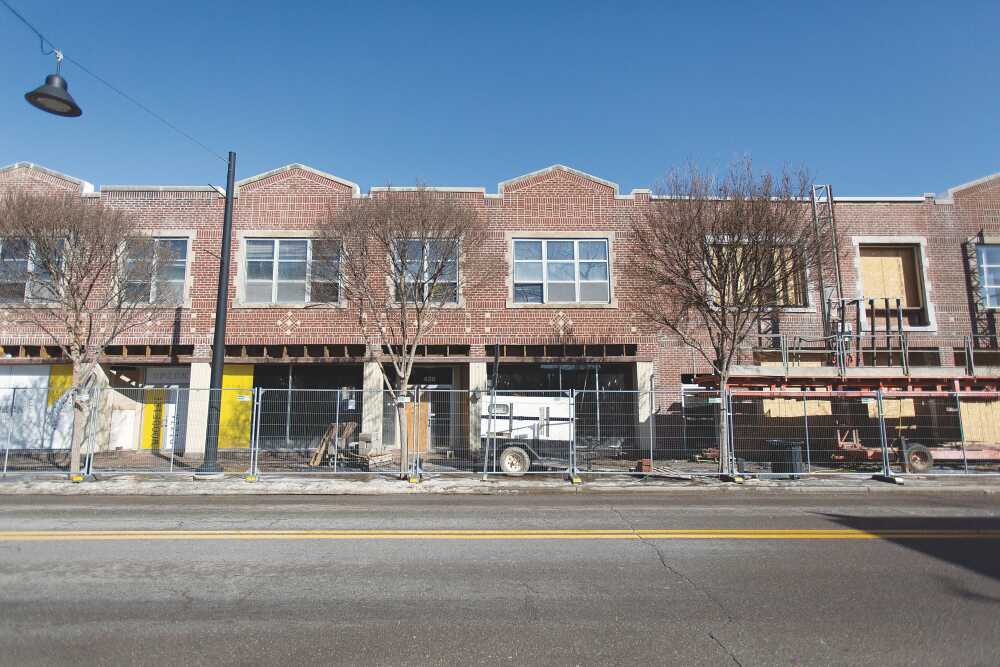 Work continues on the development at 430 Broadway, a mixed-use building that will be home to Speck, among other businesses.

Meanwhile, inside the main building, only one retail space remains, Rust said.

“Everything there is spoken for except about 500 square feet of space, which we’re currently in conversations about,” Rust said.

“And the apartments up above are going to be prime, too. Half are already contracted, so anyone interested in first-class living in downtown should contact us soon.”

The overall development also includes plans for a building at 260 N. Middle Street, which are yet to be determined.

Rust explained that there was no way so much of an investment — with incredible risk — could have been made without TIF financing. Approved by the city’s TIF commission and Cape Girardeau City Council, the developers qualify for reimbursement of more than $2.9 million of the project’s costs if they’re successful in enhancing sales and property taxes to the city by a greater amount. TIF funding is used by municipalities to facilitate redevelopment of blighted properties.

“We feel that downtown is such a big part of the core personality of Cape,” Rust said. “And we want to continue its momentum of growth. Six years ago, these blocks were largely empty. Now there’s the Marriott, the Marquette Tech District, Rust Center for Media, the Vasterling Suites, Barista’s, Magnolia just moved into a new space, and the Broadway Federal, so much exciting is happening.”

All the properties in the Rialto Retail and Residential Development are owned by Rust Communications, parent company of the Southeast Missourian.

“This project aligns with our love and commitment to the community,” Rust said. “So many people are investing themselves, their dreams, their businesses, their time, their passions in making Cape Girardeau a great place to work and live. And this project wouldn’t be happening without some special entrepreneurs at Speck, Brickwood and Kenny’s, who are investing their talents. We just love the team that’s being assembled. And we can’t wait to announce the last retailer, too — and finish out the apartments up above for someone special. It’s going to be a great building.” 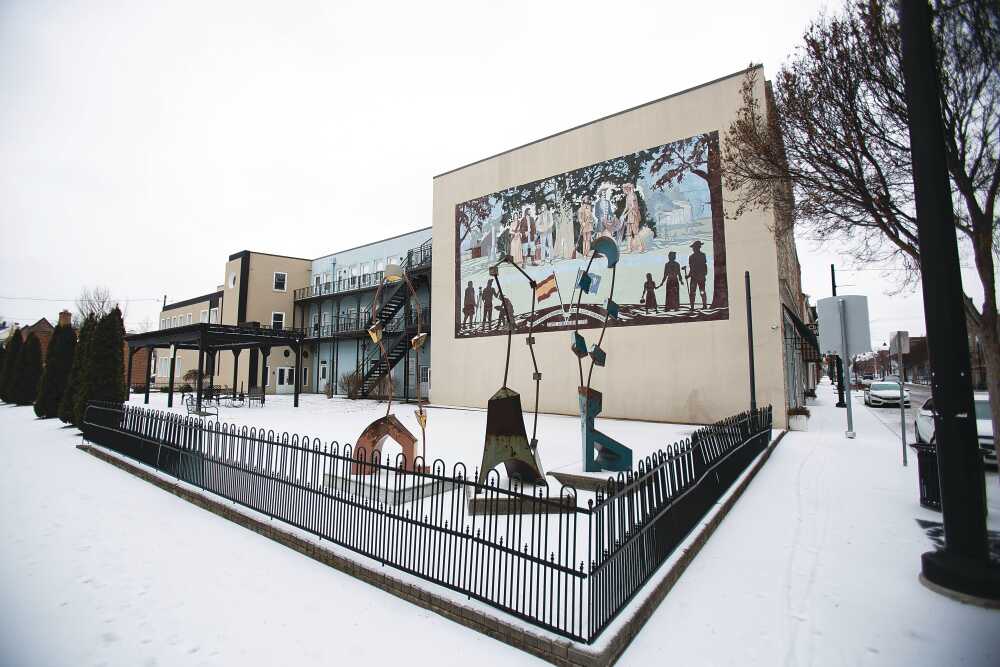 Jared Ritter entered the investing side of real estate a little over five years ago. He sold about 10 properties when he bought The Vasterling Suites Luxury Apartments, located at 151 N. Fountain Street, by doing a 1031 exchange, a simultaneous swap of one property for another.

Buying The Vasterling “wasn’t really part of my plan, but that allowed me to upgrade currently where I’m at, almost just like the game of Monopoly,” Ritter, broker of Ritter Real Estate in Cape Girardeau, said. “You do the four green houses and one red hotel and that’s exactly what I did. I didn’t really bring one dime to closing, and was able to essentially upgrade my products.”

From the window of the previous Ritter Real Estate office located in The Broadway Federal, Ritter “looked at that building every day,” he said.

The previous owners were clients of Ritter’s and approached him about listing the building to sell.

“I let them know upfront that I may be personally interested,” he said.

Over time, the deal was signed, making Ritter the new owner of the 24-unit luxury apartment complex with storefronts facing Broadway. Ritter calls the building a “focal point of our community” and says it anchors his ties to Cape “which is amazing because that’s where I want to continue building my business.”

The storefronts of The Vasterling are ready to rent and can be configured into one unit or broken into two. Originally, Ritter was going to use the space for Ritter Real Estate, but decided to stay at their current location at 139 North Main Street.

Ritter is making a presence in the downtown Cape real estate market. He lives on Lorimier Street and within two weeks of buying his house, he bought a 16-unit apartment building catty-corner from his house. In July 2019, he purchased 234 Lorimier across the street, which is undergoing a significant remodel.

Having a presence downtown feels like a joint effort, he said.

“Whenever I first started investing down here a few years ago now, I really felt like there was momentum downtown, and I wanted to be a part of that.” 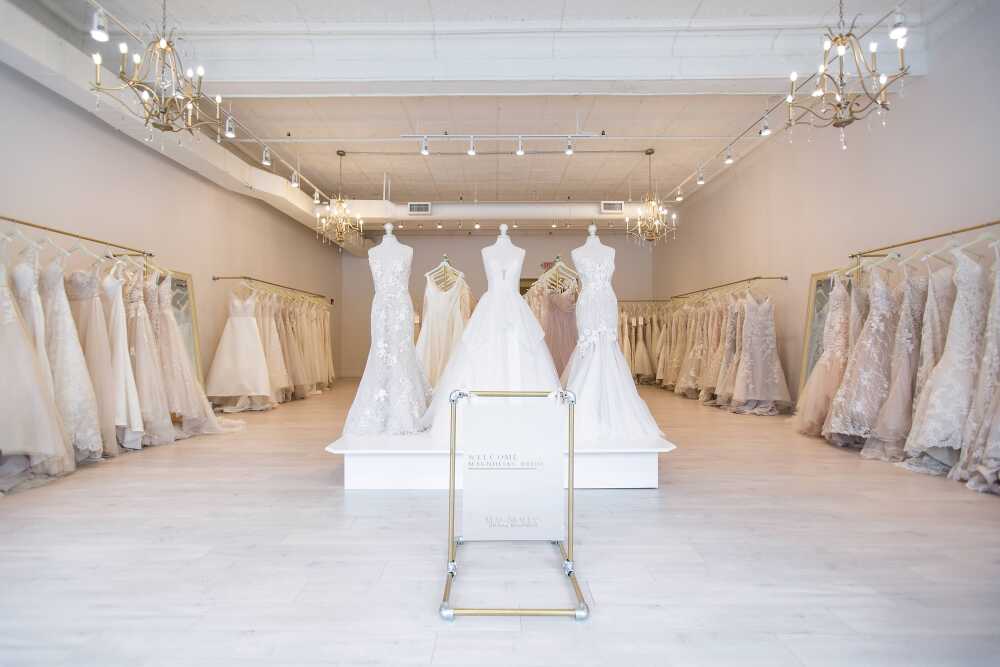 Further down Broadway is the new home of Magnolias Bridal Boutique. Magnolias has been a beautiful fixture downtown since locating in Cape Girardeau five years ago, first at 407 Broadway and, as of January, 307 Broadway — which for the past few decades operated as the entrance to Concord Printing Services. The historic building, originally known as the Vedder Building, is known for its historic tin ceilings.

“We are so incredibly humbled and thankful that our business has grown, and we needed to expand to continue enhancing the Magnolias experience,” owner Renee Clements said.

Clements said the detailed exterior facade and columns set a tone for brides stepping inside Magnolias.

“The tin ceilings are one of our very favorite details and reflect our Magnolias brand so perfectly,” she said. “It truly was as if Magnolias was meant to exist in this space at this exact moment of time.”

Oftentimes, customers leave Magnolias and continue exploring the area for food, drinks and shopping, Clements said. Loving the “charm of the downtown community,” she added, “As we began the process of relocating our space, we had no question how vital it was that we found a new space in downtown Cape.