What’s next for the Cape Girardeau Business Park? 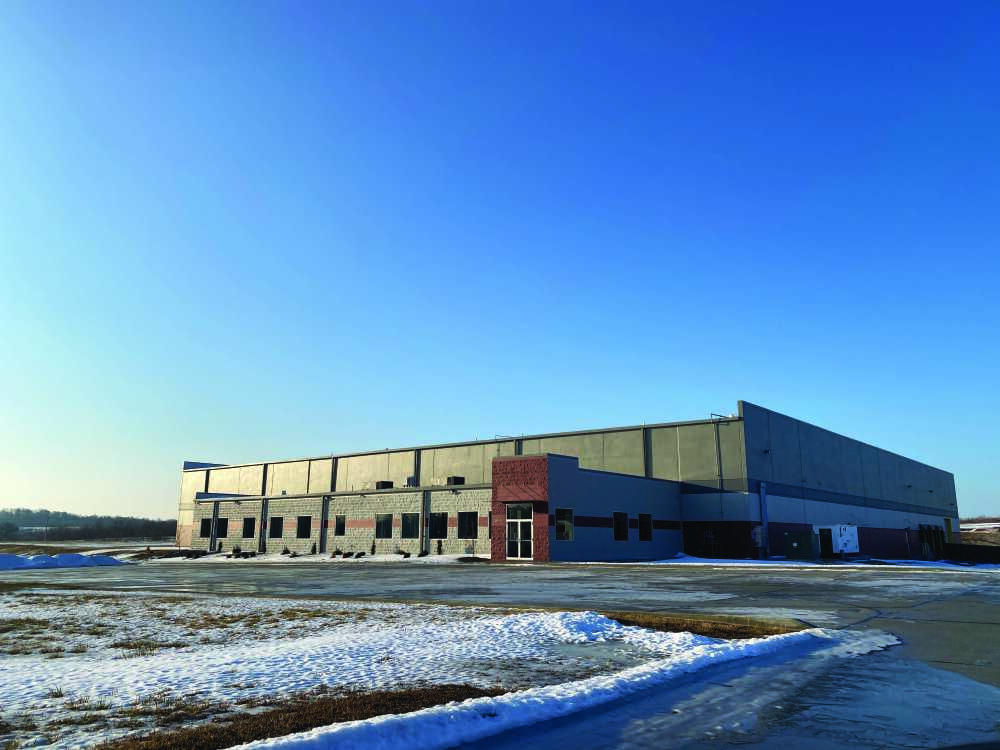 When the City of Cape Girardeau acquired nearly 250 acres of land for a business park almost 10 years ago, city leaders expected the site would be an attractive location for everything from light manufacturing and distribution firms to technology-related businesses and even hospitality services.

And although only two companies have established businesses on the site since, city officials say it’s only a matter of time before more companies take up residence at the Cape Girardeau Business Park just east of Interstate 55 at Exit 102. 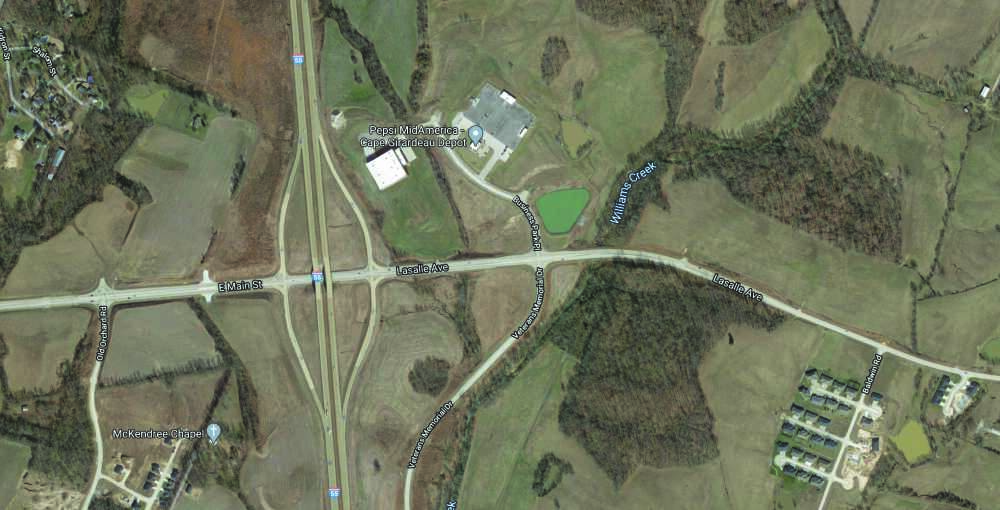 The Cape Girardeau Business Park is shown from above at the intersection of Highway 55. East Main St. and Lasalle Ave.

Cape Girardeau purchased the property, which was the former Southeast Missouri State University demonstration farm, in late 2012 from the university’s foundation. The 247 acres at the I-55 interchange with East Main Street and LaSalle Avenue was acquired for $25,718 an acre for a total cost of approximately $6 million.

At the time, then-Mayor Harry Rediger said there was “no question” the future business park would “make us more competitive” in attracting businesses and jobs to the area.

To help make the property attractive to prospective business tenants, the city has focused on building infrastructure at the site, paving streets and installing utilities throughout, including water, sewer and electric service. 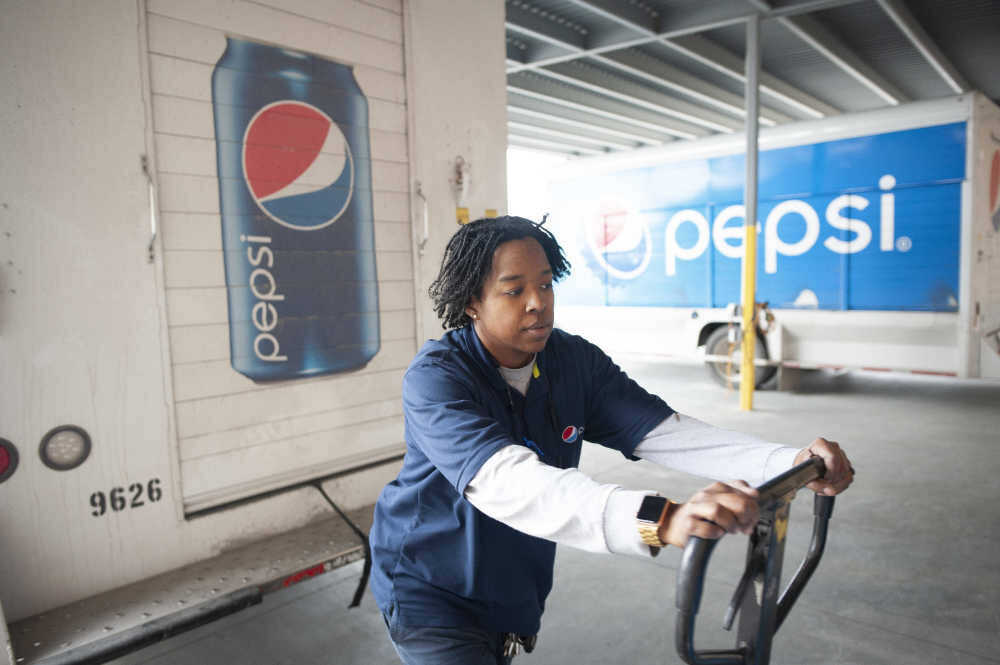 Pepsi MidAmerica full line driver Jamia Wiggins, originally of Cairo, Illinois, and now Cape Girardeau, tends to duties while unloading and taking inventory at the Pepsi MidAmerica depot in the Cape Girardeau Business Park. Pepsi MidAmerica was the first to establish itself at the business park five years ago, moving there because of the area’s growing economy.
Jacob Wiegand ~ Southeast Missourian, file
Order this photo

With the infrastructure in place, Meyer said he expects the business park to be more appealing to prospective tenants. However, he said he’s not surprised by the seemingly slow pace of development, especially during the past year with the economic challenges brought on by the COVID-19 pandemic.

“These things take time,” he said. “I have witnessed a lot of other (business park) developments in communities across the state, and you don’t find many that filled up in five years.”

Cape Girardeau Mayor Bob Fox believes Cape’s business park is well positioned for growth over the next five to 10 years. “It’s a future growth area,” he said, including the area surrounding the business park.

The mayor said he expects additional street and highway connections to augment the park’s appeal to potential tenants.

At some point in the future, the mayor said LaSalle Avenue will continue east past Route W and connect with Highway 177, creating a new corridor to the Procter & Gamble complex. In addition, Veterans Memorial Drive will eventually extend southward, connecting LaSalle Avenue to Highway 61 (North Kingshighway) on Cape Girardeau’s north side.

Although it lacks a rail connection, the business park’s positioning provides convenient interstate access for numerous motor freight carriers and trucking terminals. In addition, the Southeast Missouri Regional Port Authority and air transportation services at the Cape Girardeau Regional Airport are both only a few miles to the south.

Pepsi MidAmerica, headquartered in Marion, Illinois, was the first company to plant its flag in the Cape Girardeau Business Park five years ago, occupying 17 acres for a distribution center.

It wasn’t until three years later, in 2019, that Idyllic Enterprises, a manufacturing and distribution operation owned by Derek and Karla Cornelius of Cape Girardeau, became the second business park tenant. The company, at 3849 Business Park Place, is across the street from the Pepsi MidAmerica property and covers about 14 acres of the business park.

In addition to Pepsi MidAmerica and Idyllic Enterprises, Drury Development Corp. has also invested in two parcels in the Cape Girardeau Business Park.

Under the terms of the property sale to Drury Development, which was finalized in early January 2017, Drury was to begin development of at least 25% of the property within four years and if half the property is not developed within 10 years, or by 2027, the city would have the right of first refusal to purchase the undeveloped property back at the original price per acre.

In addition, if the city receives a proposal from another developer to build a hotel on any of the other business park property, the Drurys would have the right of first refusal to buy that property but would then be required to start construction of a hotel within three years.

“The goal was to keep them (Drury Development) from just holding the land,” Meyer said. “We have not had activity by the Drurys since the contract was signed (and) the first ‘benchmark’ at four years has just arrived.”

Mayor Fox said “the whole premise” of adding a development timeline to the sale contract was to make sure the land wouldn’t remain idle.

“It’s kind of in their ballpark as to what they want to do,” Fox said.

Meyer said he reached out to Drury Development in late January to remind the company of the four-year deadline but as of a few weeks ago when this story was written the company had not responded. (As of early February, the company also did not respond to several emails and telephone messages from the Southeast Missourian requesting comment for this story.)

In the meantime, both Fox and Meyer say they’re confident the business park will continue gradual growth and that the city will be able to comfortably continue its annual payments on the property, which will continue for several more years. The payments are being underwritten by a portion of the city’s casino revenue.

“We’ve been very conservative and wise in the way we spend casino money,” Fox said and described the business park funding as a “discretionary investment.”

Both the mayor and city manager say they’re confident the Cape Girardeau Business Park will eventually mature and reach its full potential along with additional commercial buildup surrounding the I-55 interchange at Exit 102.

“If we get a development that builds up there every few years, I’d say we’re in pretty good shape,” Meyer said.