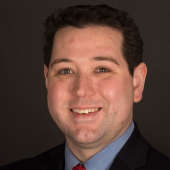 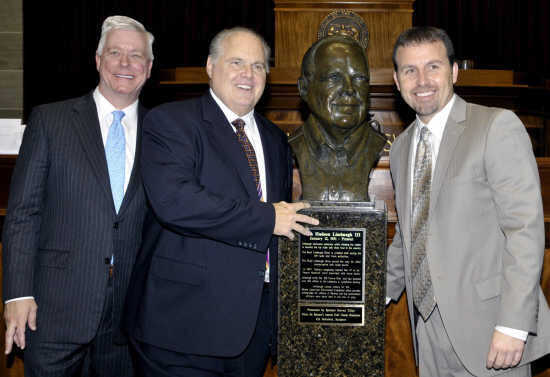 Lt. Gov Peter Kinder, left, and Speaker of the House, Steven Tilley, right, pose with conservative commentator Rush Limbaugh and a bust in Limbaugh's likeness during a ceremony inducting Limbaugh into the Hall of Famous Missourians on Monday, May 14, 2012, in the state Capitol in Jefferson City, Mo. (AP Photo/Julie Smith)

Limbaugh was the first to develop a prominent place for conservatives in media, and no one has been able to replicate his talents.

Former Lt. Gov. Peter Kinder grew up in Cape with Rush -- referred to as Rusty to differentiate from his father and grandfather of the same name.

"Here we are in the heart of Cardinal Nation, and Rusty was a Dodger fan," Kinder told me. "Totally committed to Walt Austin, and Maury Wills was his favorite player -- the shortstop for the Dodgers."

It was evidence of Rusty's uniqueness, Kinder said, adding he was full of zest and exuberance in everything he did.

Kinder said even today hearing his friend on the radio, he's reminded of Rush Limbaugh II -- the late father to Rush and his brother David Limbaugh, an attorney and conservative writer.

"That's the way his dad used to boom out his message, except he didn't have the radio platform," Kinder said.

Kinder recalled how at the age of 13, Rush started shining shoes at the barber shop on Broadway near Houck Stadium. It was a point of pride for his father.

Rush would go on to letter in football as a sophomore at Cape Central, a rarity at that time. He was a kicker, Kinder said, and a fine Babe Ruth League baseball player.

"He was a slugger. He was a home run hitter."

Rush would soon leave his sports playing days behind to become a disk jockey on KGMO. Radio was all Limbaugh wanted to do, Kinder said.

Much has been written about the years following, working in professional baseball with the Royals for five years before resuming a career in radio. Fired multiple times but never deterred, ultimately landing at WABC in New York and having his show syndicated. He and his wife, Kathryn, launched the "Rush Revere" American history children's book series. And there's plenty to be written about his noble charitable efforts.

Kinder said Rush's impact has been "immeasurable nationwide" as he gave a voice to the conservative movement previously not represented.

"With the ending of the Fairness Doctrine that the Reagan administration did back in the late '80s, Rush did something that nobody thought could be done," Kinder said. "And that is three hours on the radio, no gaps, just him."

Early last year Rush announced he had been diagnosed with Stage IV lung cancer. He's been candid yet mainly quiet about his battle, only providing health updates periodically on the radio.

But in his final show before Christmas, Rush delivered touching remarks about being grateful. If you haven't heard the remarks, I encourage you to check them out here.

Today is not about his diagnosis. It's simply to wish Rush Limbaugh a happy birthday with greetings from Cape Girardeau. Happy 70th birthday, Rush. All the best to you, Kathryn and the family. This writer and many others are praying for you.

Lucas Presson is assistant publisher of the Southeast Missourian. Sign up for his email newsletter at semissourian.com/newsletters.

Prayers from Cape Girardeau for Rush Limbaugh -- America's latest Medal of Freedom recipient
Lucas Presson
The son of two music educators, I benefited greatly from the spoken word as a child. Whether it was a trip to visit family in Charleston, Missouri or a quick errand around town, my parents sang in the car, played music and listened to some guy on the radio. His name: Rush Limbaugh...
More from this columnist · Lucas Presson