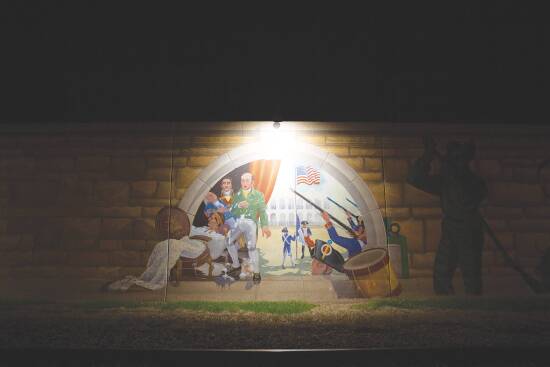 Panels of the Mississippi River Tales Mural glow under the recently installed lighting in in downtown Cape Girardeau.

Good evening and thanks for coming out tonight to help us celebrate this historic occasion.

In case you don’t know me, I am Danny Essner, and I currently serve as the board president for Old Town Cape.

Before I go any further, I would like to recognize a special guest we have with us tonight. Tim Blattner, could you please raise your hand? Tim currently lives in St. Louis, but spent most of his life right here in Cape Girardeau. For those of you who don’t know Tim, he was the chairman of the River Heritage Mural Association that was responsible for having these historic murals painted several years ago. I would go so far as to say that without Tim’s leadership, passion and perseverance, we would probably not have any murals to light this evening. I would ask that you join me in a round of applause for Tim Blattner and the impact that he has had on Downtown Cape. 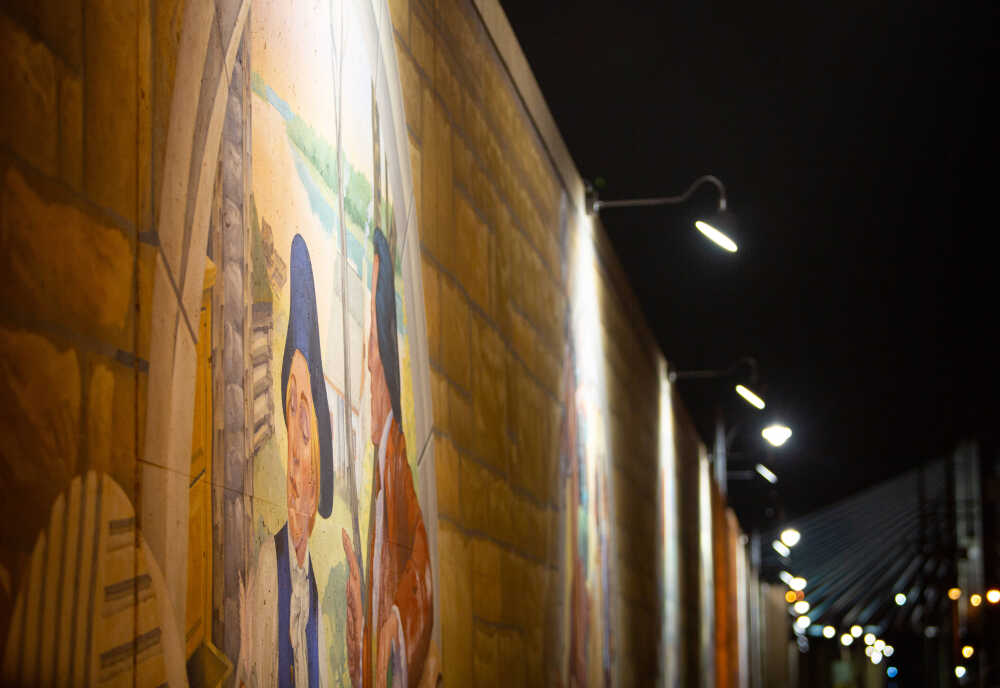 Panels of the Mississippi River Tales Mural glow under the recently installed lighting in in downtown Cape Girardeau.
Aaron Eisenhower ~ B Magazine
Order this photo

As most of you would probably agree, the Mississippi River and the historic Downtown murals on our flood wall are typically one thing that any out of town visitors to Cape have to see.

These murals were originally painted in 2003 and 2004 and were the culmination of a multiyear effort by the River Heritage Mural Association, which was originally established in 1987 and was an outgrowth from the Chamber’s Tourism Committee. Its membership over the years included Tim Blattner, its chairman, along with Jake Wells, Bill Chamberlain, Donna Hanschen, Paul Lloyd, Chuck Martin, Freck Shivelbine, Don Greenwood, Craig Thomas, Narvol Randol Jr., Ray Owens, Sharon Sanders and Frank Nickell.

The early projects of the association involved painting murals on various Downtown buildings, including the Shivelbine building and the CP McGinty building, along with the original Welcome to Cape mural on the river side of the floodwall. 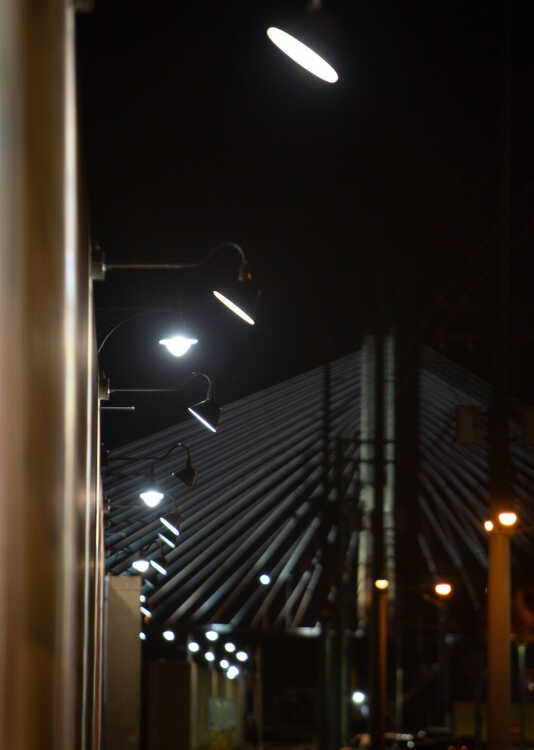 Lights hang above the panels of the Mississippi River Tales Mural in in downtown Cape Girardeau.
Aaron Eisenhower ~ B Magazine
Order this photo

In 1999, this group decided to pursue a much more ambitious project that would involve painting a historic mural on the street side of the wall. After a year of planning and discussion, the eventual concept of sandstone blocks with archways was chosen. A subcommittee comprised of Ray Owens, Sharon Sanders and Frank Nickell was assigned the task of coming up with topics for 24 panels and eventually narrowed their list down to what you see today.

Once the basic concept was nailed down, requests for proposals were sent out to mural artists around the country. Those responding were required to submit a sample painting of the Lewis and Clark panel along with cost proposals. Ultimately, artist Tom Melvin from Chicago was chosen to paint our mural. He brought some artists with him from Chicago, but also utilized local talent including Craig Thomas and several university art students.

Keim paint, which was developed in Europe for mural painting, was required to be used. This brand of paint is actually absorbed by the outer layer of concrete and is projected to last for several decades. Painting commenced in October 2003 and was completed in November 2004. As an aside, Tom Melvin wanted to make the people in this mural as realistic as possible, and recruited local individuals who frequented the Downtown area to serve as models. As a result, if you look really close, you might recognize someone you know when you look at the faces in the mural. 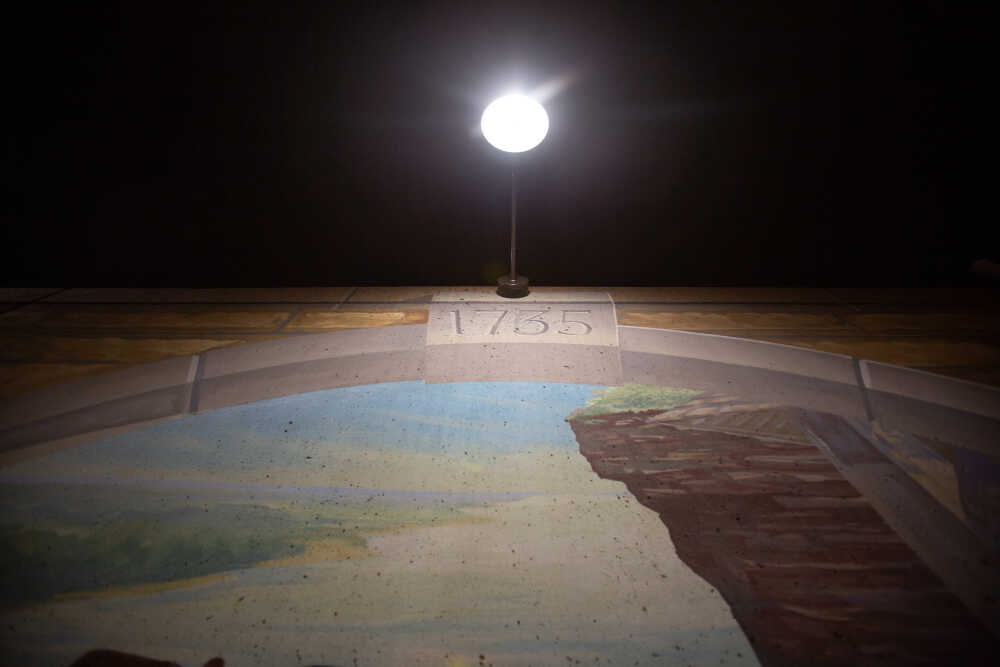 Panels of the Mississippi River Tales Mural glow under the recently installed lighting in in downtown Cape Girardeau.
Aaron Eisenhower ~ B Magazine
Order this photo

At the end of the day, none of this could have happened without lots of money. The total cost to paint the murals and install new pavestone sidewalks and reader boards came to $270,000. It would have been really difficult to come up with that amount of money without the assistance of Rep. Jo Ann Emerson, who was able to secure $175,000 in federal funding for this project. An additional $125,000 was generated through the sale of sponsorships for each panel and its corresponding reader board at $5,000 each. The total funds raised of $300,000 left $30,000 to set aside for ongoing maintenance of the wall, including eventual lighting of the mural. These funds were transferred to Old Town Cape when the mural association later disbanded.

This brings us to the next part of our story. Lighting options were investigated shortly after the mural was painted by the mural association, but nothing could be found that was effective and affordable. The lighting project was resurrected by Old Town Cape 10 years ago. At that time, commitments were obtained from the City of Cape and Cape’s Convention and Visitor’s Bureau to share in the cost of the lights. Unfortunately, once again, none of the lighting options that were explored were adequate or affordable and mural lighting was again put on hold. Fast forward to 2018. Old Town Cape once again decided to investigate lighting options and was excited to learn that technology had progressed with the evolution of LED lighting, and lighting the murals finally appeared to be feasible. Kevin Amschler with Cape Electric was instrumental in determining what brand and type of light fixture would be most practical. After exploring various options, including mounting lights on the ground in front of the wall or on the reader boards, it was determined that mounting the lights on the face of the wall just above each panel would be the easiest and least expensive option. Electrical conduit was already in place on top of the wall and having the fixtures 18 feet above the ground would discourage vandalism.

Once we narrowed the selection of fixtures down to two or three, we actually climbed on top of the wall to hold each of the fixtures out over a panel to insure they would adequately illuminate the panel before proceeding with the purchase of 24 fixtures. At this point we needed a contractor to install the lights and ultimately chose Lance Cotner Electric to handle this part of the project. We also decided that if we were going to light the mural, we also needed to clean it. After accumulating grime and mildew for 16 years, the mural had lost a lot of its original luster. We ultimately were connected with Shawn Gunn with Premiere House Wash to explore cleaning options.

Everyone was concerned about damaging the paint on the murals. Pressure washing was tried but removed the paint and was not a viable option. Shawn offered to experiment with different chemicals and eventually found one that removed the grime but left the paint intact.

Now that we had all the pieces in place, we still had several hurdles to overcome. The first one was to obtain a permit from the Corps of Engineers, whose permission was required since they oversee the maintenance of the wall. In prior years, this step alone could have taken well over a year. As luck would have it, in 2018 R.D. James from New Madrid was installed as the new director of the Corps’ civil works. One of his first mandates after taking over was to make the Corps more responsive and accommodating to communities along the inland waterways. As a result, we were able to obtain our permit in less than five months.

At this point we were down to one final hurdle. Federal law requires a flagman to be in place to monitor for oncoming trains any time work is being done in close proximity to railroad tracks. We knew this would not be cheap, but were still surprised to learn that this would cost around $1,000 per day since we had to use a Burlington Northern employee. With the time to complete installation estimated at 10 days, this would require another $10,000 — which we did not have.

Initial efforts to have the flagman’s time donated by Burlington Northern were unsuccessful. In May of this year, we discovered that Burlington Northern had a foundation and applied for a grant. After hearing nothing by September, we learned that it could take up to a year to get an answer from their foundation. After working on this for almost two years, we really wanted to make it happen so the murals would be cleaned and illuminated for the upcoming holiday season. At this point, a decision was made to pursue donations from local businesses to cover the cost of the flagman. The initial responses were very positive and one individual offered to provide $10,000 up front to allow us to get started. With the end finally in sight, we contacted Burlington Northern to schedule a flagman, and much to our surprise learned that Ameren was getting ready to start a project near the cement plant that would require a flagman to be in place for six weeks. We were informed that if it was OK with Ameren, we could use their flagman at no additional cost to us. When we contacted Ameren, they graciously agreed to let us share their flagman, for which we are immensely grateful.

With the fixtures already purchased and stored at Cape Electric, we were able to hit the ground running and here we are today, with the cleaning completed and the lights ready to come on.

I would like to offer special thanks to the City of Cape and the Cape Convention and Visitors Bureau for their financial assistance; to Cape’s Public Works Department for their assistance in obtaining the Corps permit; to Kevin Amschler with Cape Electric and Sam Birk with Lighting Associates for their expertise and assistance in finding fixtures that would work; to Lance Cotner and his crew for their responsiveness and expertise in handling the installation of our new lights; to Shawn Gunn for finding a cleaning option that worked without damaging the murals and made them look new again; and to Ameren for allowing us to use their flagman. It took a team effort and a lot of perseverance to get to this point since lighting the murals was initially pursued 15 years ago.

I personally can’t wait any longer to see what they look like, so I would ask all of you at this point to turn around and face the wall and then join me in a countdown, after which all 24 mural lights plus the lights on top of the wall will come on. Are you ready? Here we go. … Flip the switch!