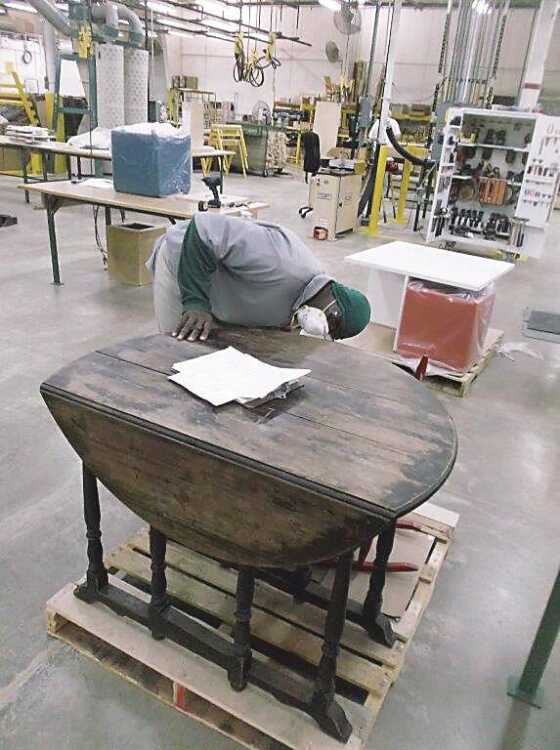 Willie Henderson, factory floor lead man, inspects a table received from a customer before workers restore it. Henderson has worked with Missouri Vocational Enterprises for 16 years and began in the payroll department.
Submitted photo

When David Love speaks about the process of woodworking, it’s clear he loves what he does.

Love, who is incarcerated at the Southeast Correctional Center (SECC) in Charleston, Missouri, has been employed through the U.S. Department of Labor at Missouri Vocational Enterprises (MVE) since 2015, working with a team to build and sell furniture to state agencies, not-for-profit entities and individuals employed by the state. He was hired first into the storeroom and then became a computer operator. In this position, he says he requisitions out the wood, laminate and hardware, as well as inventories the raw materials. Throughout the past five years, he has seen the operation transition to a paperless model as well as become more efficient through the computer system designed by other people who are incarcerated. The new computer system is used to help organize inventory and keep builders, sanders and stainers informed about a project throughout every part of the process.

“We see it as raw material going through the phases, and it’s beautiful to see it go from just a long board or plywood to a finished product where the drawers work and the handles are all pretty and the shine is on the top of it,” Love says. “It’s a beautiful thing for us to all have a part in that.”

Missouri Vocational Enterprises started at the Southeast Correctional Center in 2005, although Jody Ruminer, factory manager, says the program in the State of Missouri is more than 50 years old. The men employed by the program have designed and built desks for the Missouri House of Representatives that are replicas of desks originally used by the governing body 100 years ago. The workers have also built the benches for the Cape Girardeau County Courthouse in Jackson, and currently, they are building desks for the Missouri Senate. They also build cabinets for houses built by Habitat for Humanity, make dormitory furniture for universities and have made drums for individuals. Any challenge people send to them, they work together as a team to design and build something the customer will treasure.

According to the Missouri Vocational Enterprises website, the organization is a program of the Division of Offender Rehabilitative Services within the Missouri Department of Corrections, established by State Statute RSMo 217.550 to “create meaningful job training for incarcerated offenders” by utilizing “offender labor, along with supervisors and administrative staff, to provide quality products and services to state agencies and other not-for-profit entities.”

The program operates on a working capital revolving fund and does not receive funding from tax dollars from the general revenue. Throughout the state of Missouri, Missouri Vocational Enterprises Correctional Industries operates in 12 correctional institutions in 22 industries and services, including woodworking, consumable products, and clothing and textiles.

People in the training programs can earn a 2,000-hour to 8,000-hour certificate with the Department of Labor. The program aims to decrease recidivism through providing training and work experience these people can utilize to secure employment when they are released. As the workers are paid for their labor, it also helps them support their families and save money to help them get back on their feet when they enter back into society outside the walls of the prison. Although the main goal of the program is to transform lives, Missouri Vocational Enterprises’ website points out the program’s success also decreases the amount of taxpayer money spent on people who might be re-incarcerated if they did not have this opportunity.

Willie Henderson is another of these men. He has worked with MVE for 16 years, working his way up from payroll to the build line where he worked for more than a decade so he could gain experience on different build lines and grow in confidence to be ready to meet any challenge. Currently, he works as factory floor lead man. In this position, he makes sure all production and non-production departments are working together toward a common goal, solving any production issues that arise. He also ensures jobs get out on time and inspects the quality of the work and materials.

Each employee at MVE is required to have a high school diploma or equivalent since it is a premium-paying job at the correctional center. The hiring process is much the same as applying for a job outside the walls of the prison: an institutional background check is conducted on each applicant, and the functional unit manager, case managers, officers and other staff provide recommendations to ensure the applicant will be a good fit.

Love says the men at the prison know MVE jobs are “the best jobs here,” and calls it “the premium job at the camp.”

“People look up to this place, and the family of guys that work here, we try to hold a standard. We don’t want to lose our jobs. There’s just not much else to offer,” Love says. “But to come in here and then see the quality of guys that do work here, you become pretty tight with them, and it’s like a family. When we come to work at 7 o’clock in the morning, we’re here until 5 o’clock in the evening, and we don’t feel like we’re prisoners. We feel more freedom in here because we can use our creativity, our hands to produce things — they’re productive — and I just appreciate the boss hiring me here. I really feel privileged to work on this team.”

He is also appreciative of the privilege he has through his job of continuing to further his computer skills. He says often while technology and the world continues to evolve outside the walls of the prison, it can feel like

time for people is frozen inside the prison.

Some of the men he’s worked with have come back to speak after they’re released from prison and are living successfully in the “free world,” Love says.

“It gives me hope getting back out that there will be room for me out there in the working world, and I look forward to that,” he says. “It helps as a man — I want to be productive — it’s fulfilling, to be able to build something that’s beautiful, put together well, to have a part and see things built,” Love says. “I can rest at night knowing I did a job as a man. I feel good about that.”

Henderson says he has been transformed through his employment at MVE, as well.

“It has had a real impact on my life. It has helped me become a better man,” Henderson says. “It has helped me to be more productive and be accountable. … It’s taken the burden off my family for income; I don’t have to so much rely on them. I have a steady income on my own at this time. It’s just helped me to grow … to help hold down a job, to learn skills that I need to take back into society.

“This is the best factory in the world at SECC. There’s no other factory like it.”