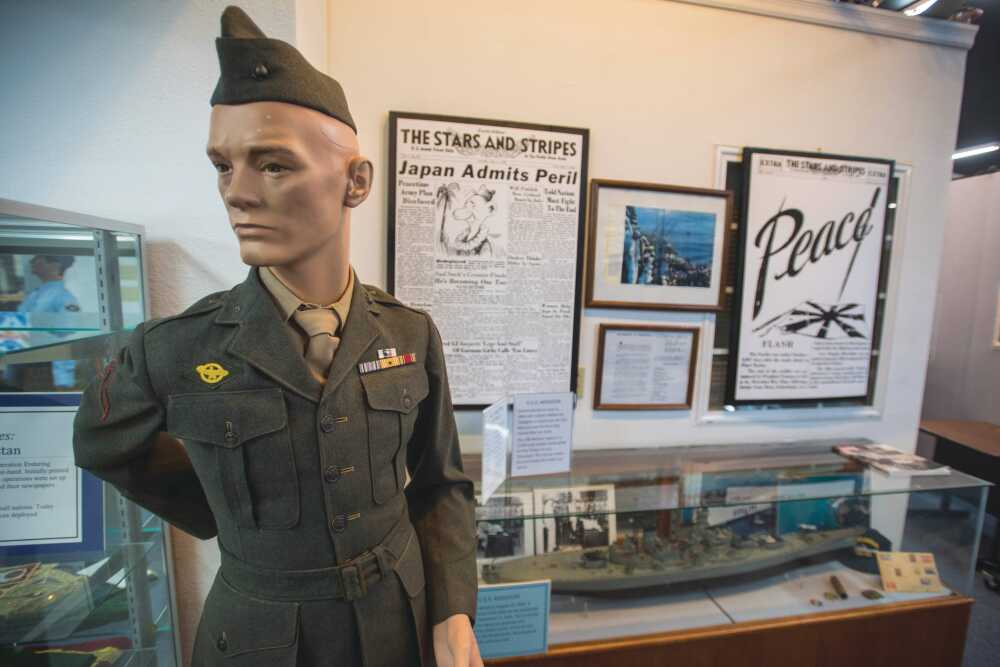 A mannequin wearing a World War II-era service uniform stands at the entrance to the World War II exhibit at the National Stars and Stripe Museum and Library in Bloomfield, Missouri.
Ben Matthews ~ Southeast Missourian

In a small Southeastern Missouri town of 2,000 people sits a 7,500 square-foot museum that began with a phone call from a man in Indiana. It was 1968, and this man had just discovered an original copy of the Stars and Stripes newspaper in a rolled-top desk in his attic. After being denied payment from the Smithsonian -- they only take donations -- this man contacted the Stoddard County Historical Society, who purchased the paper for $250. For the next two decades, veterans, stripers (alumni of the Stars and Stripes) and local townspeople collected old newspapers, artifacts and donations for the historical museum that opened in 1991.

Bloomfield, Missouri, is a town filled with Civil War history, and the original location of the first print edition of Stars and Stripes, a military newspaper created by the soldiers, for the soldiers, that began in 1861. The newspaper was taken over by the Department of Defense during World War I and continues to run today, both online and in print, serving soldiers and their families in the United States and overseas. Even though the newspaper hasn't been printed in Bloomfield for quite some time, the museum remains the only one in the world that highlights the Stars and Stripes role in both American and world history. "People can hold [the newspaper], see what size it was," says Laura Dumey, museum administrator, who loves to meet new people and help them find past editions. "We get a lot of calls from veterans who are looking for copies that they may be in."

It's getting to hear personal stories from people who have lived through times of war or were personally involved with the paper that makes all the hard work worth it. Which is why the museum is diligent about not only highlighting the difficult parts of war but being intentional about remembering the good times, as well.

Jim Mayo, one of the museum founding fathers and past board president, has been involved with the museum from the very beginning. "I'm from Bloomfield, and it was natural, being military," says Jim, who served in the United States Army from 1956 to 1957. This piece of history is "important not just for our town, but for the entire area."

His wife, Sue Mayo, agrees. As a retired librarian at Bloomfield High School, she now serves on the board of directors and recently dropped by to see the new exhibits. "I'm very impressed with the work the employees are doing up there," says Sue.

Of course, that work is only possible because the community has been so supportive of the ongoing process to update and expand the museum. This past November, a benefit dinner hosted by Jim Martin, current board president, allowed the museum to hire five full-time, paid staff members, when there used to be only one.

Morgan Wilkinson, museum curator, is one of the new hires. Born and raised in Bloomfield, she has always loved history. This love led her to Southeast Missouri State University, where she received a bachelor degree in anthropology. In her new role, Wilkinson is in charge of a little bit of everything, including education, programming, donor events and exhibits. She wants the museum to be a place where young and old will revisit again and again.

"We used to be one and done," says Wilkinson, referring to the number of times individuals would visit their location. "People didn't have to come back because there wasn't anything new." 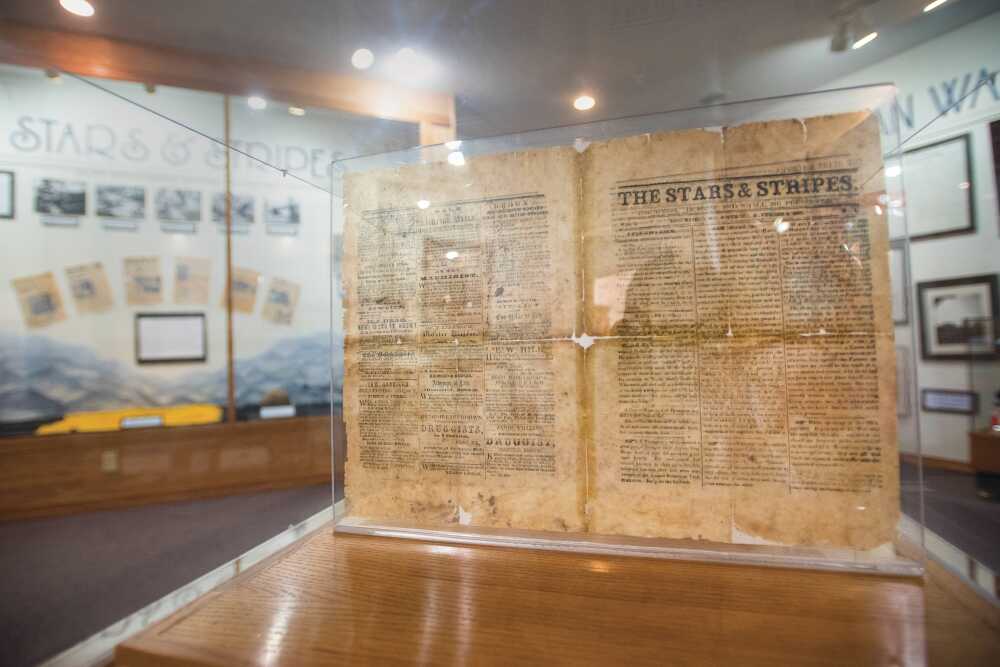 One of three original copies of the Stars and Stripes military newspaper sits on display at the National Stars and Stripe Museum and Library. The inaugural issue was printed Saturday, Nov. 9, 1861, in Bloomfield.
Ben Matthews ~ Southeast Missourian

And that was okay for a time. As a privately-funded, not-for-profit organization, they did what they could. Not necessarily a military museum, not quite a newspaper museum, but somewhere in the middle. As a niche market, they have worked hard to find the right balance of information that will appeal to both military, historians and the general public.

The extra funding has allowed the team of staff members and volunteers to get creative with the new exhibits, making them more interactive and educational. After redoing the World War I section, they introduced a Battle of the Bulge exhibit that children can crawl in and look out. Two of their mini exhibits showcase items you would find in a bunker.

"If kids can't touch things at the museum, you're gonna lose them," says Wilkinson, who enjoyed finding artifacts that were already in the museum and repurposing them for a new use. And the older exhibits are still there, too -- 13 in all -- both permanent and temporary stations that highlight each major military conflict the Stars and Stripes reported on.

In addition to the exhibits, the Stars and Stripes museum hosts a monthly kids' night as well as a week-long summer camp that highlights local and military history. Unfortunately, due to county restrictions during COVID-19, many of these programs have been halted for the near future, but there is still plenty to see. An average guided tour through the museum with a stop in the gift shop takes about 90 minutes. And the best part? It's completely free and close to home.

Currently, the discontinuation of the print edition of Stars and Stripes is being discussed in Congress. While there are many people who do not want to see this happen, the museum is and always will be, as their website, starsandstripesmuseum.com, states, "dedicated to collecting, documenting and preserving materials related to the creation and continued history of the Stars and Stripes military newspaper."