Vintage Tractors: A way to build and relive family memories 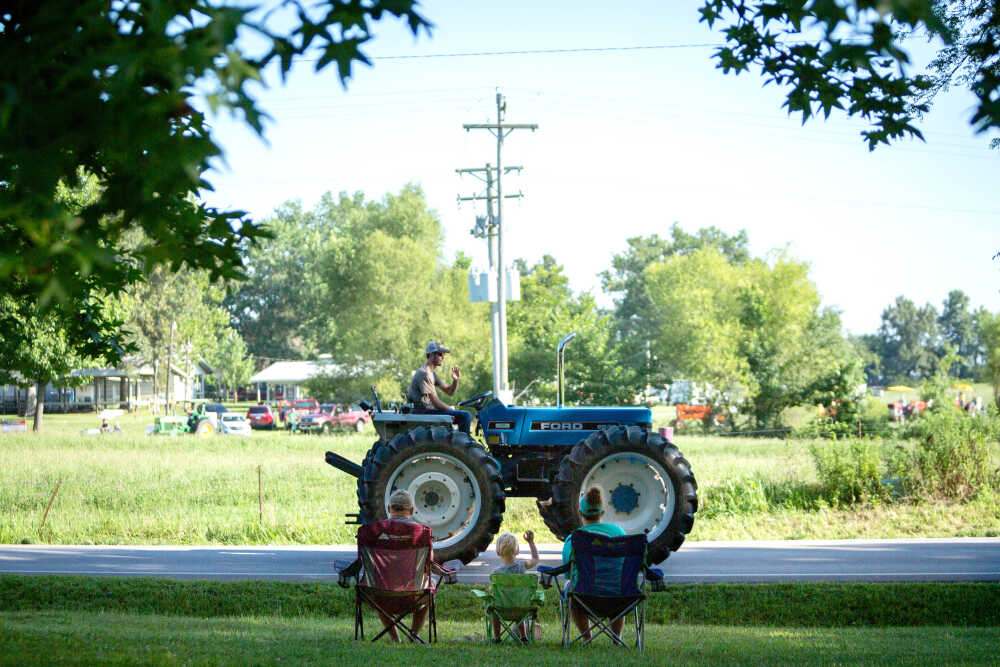 Miles Deckerd, 3, waves at the passing tractors as he and his parents Steve and Candice Deckerd watch the River Hills Antique Tractor Ride as from the side of Highway T in Perryville on Saturday, July 25, 2020. The ride took participants on a 30-mile loop through Perry County.

Heirloom items hold generations of memories, and that's no different for club vice president of the River Hills Antique Tractor Club. As member Jerry Davis describes it, "Every tractor has a story."

The club's annual ride throughout Perry County gives locals and travelers alike the opportunity to participate in a nearly two-decades-old tradition involving those vintage tractors. The last Saturday of July, tractors line the hilly blacktop county roads and state roads, completing a more than 30-mile journey over the course of several hours.

There's a strong connection between family memories and the annual tractor ride, club president Marty Conrad says. Some participants travel from out of state to ride with sons or grandsons in the parade, visiting from up to hundreds of miles away. With a buddy seat attachment to the tractor, Conrad says many older couples enjoy riding together in the parade. 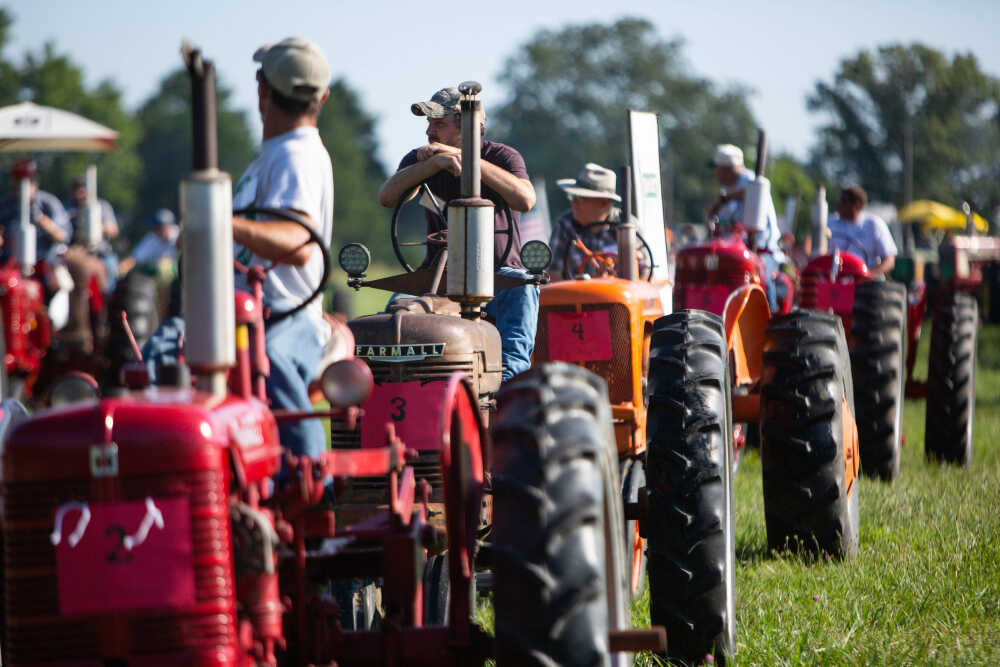 Participants await their turn to pull away from the start during the River Hills Antique Tractor Club Adventure Ride.

Davis adds that during a tractor ride several years ago, a few participants noticed a tractor that looked similar to a Case SE their father used to own. In fact, it was the same tractor, Davis says; through connections in the annual parade, they were able to purchase and return the father's beloved tractor back to him.

"That's how a lot of this gets started -- a lot of memories," Davis says.

Another longtime tractor enthusiast, Dennis Lappe, joined Davis in creating memories at the first tractor ride 18 years ago. The Antique Hills Tractor Club was inspired by similar parades in other cities, they say, and the ride was adapted to fit the club's members. The first ride began with 65 tractors departing from the Fruitland auction barn, traveling northward through the county, Davis says. Now, upwards of 120 to 140 participants attend the yearly event. 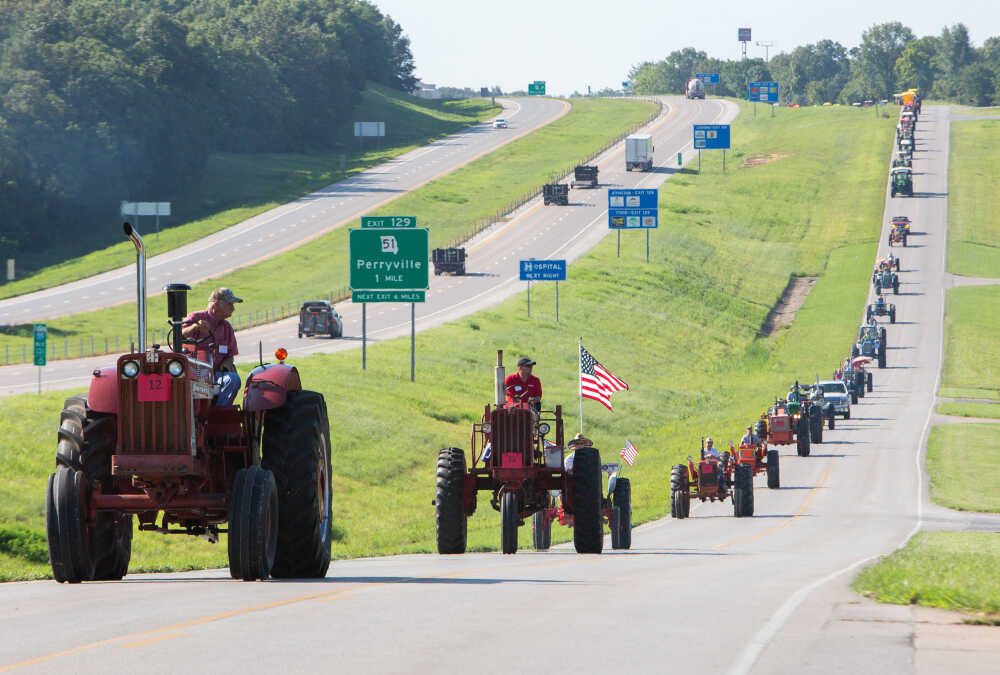 Tractors stretch down Lake Road next to Interstate 55 in Perryville during the River Hills Antique Tractor Club Adventure Ride.

This year, 88 tractor enthusiasts participated in the 32-mile parade, Davis says. Numbers were low this year because of COVID-19, but all still enjoyed the July 25 event. Tractors departed from the Perryville Seminary Picnic Grounds at 8:30 a.m. and traveled northward through Perry County, with the assistance of law enforcement to guide traffic. All that's needed to join the parade is a valid driver's license and common courtesy on the road.

During the ride, participants are divided into four groups of about 40 tractors each, staggered apart to complete the three-part ride. Groups of participants from previous years are kept together "so it doesn't feel like you're a complete stranger from year to year," Conrad says.

"It's kind of like a family reunion to some of them, especially since we keep them in the same groups," Lappe says. "They don't see each other, and then when they get in these stops or in the morning before it starts, we all get together to see how we've been."

The parade is divided into three stretches, allowing stops this year at a Christ the Savior church in Brewer, Missouri, and Veteran's Memorial Park for short breaks to chat and stretch their legs, Conrad says. The parade concludes in Perryville with a catered meal under the shade of trees at the Seminary Picnic Grounds, where the ride began.

One of the most enjoyable parts of these breaks is the opportunity to "talk tractors" with fellow enthusiasts, Davis says. Many in the group are loyal to certain brands -- such as Davis' favorite, Ford tractors -- and enjoy discussing their different models.

Last year, Davis says he thought he was unable to take his beloved 860 Ford tractor on the annual ride and considered having his grandson, Gus, take the tractor instead. He says he reconsidered after going to the barn to break the news to the vintage tractor.

"I told that tractor that 'I'm not taking you this year, Gus is gonna take you,' and it started crying, got water on it," Davis jokes, adding that he rode the first four miles while his grandson completed the rest of the parade.

As a more permanent recognition of vintage tractors and their stories, Davis says the American Tractor Museum will be opening in Perryville August 8 to display older farm equipment, including Oliver tractors from a Johnny Cash movie and featured tractors from local collectors.