In national politics and this pandemic: No hands are clean 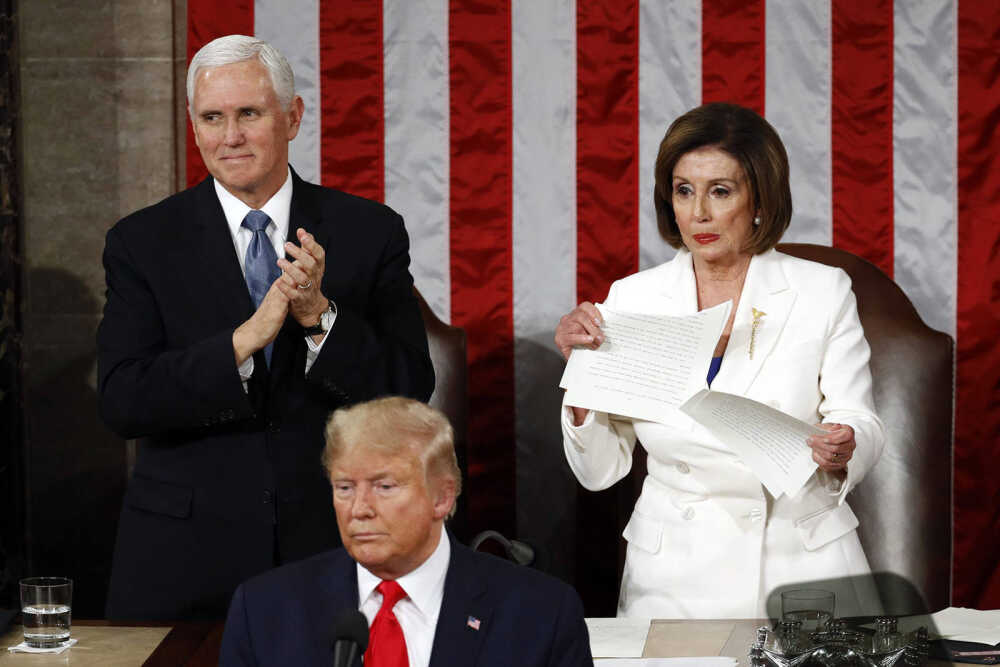 House Speaker Nancy Pelosi of Calif., tears her copy of President Donald Trump's s State of the Union address after he delivered it to a joint session of Congress on Capitol Hill in Washington, Tuesday, Feb. 4, 2020. Vice President Mike Pence is at left.
Associated Press

Early in 2017, Southeast Missouri State invited Hillary Clinton media strategist Zerlina Maxwell to speak. She showed a one-sided video about Trump supporters. "People were really enthusiastic about being openly racist," Maxwell said, chalking Trump's victory to bigoted impulses in the worst people. She explained the need to make sure Trump -- racist, sexist, empowering to those who should be suppressed -- was not "normalized."

Maxwell also showed a video of news compilations about Hillary Clinton, where the Democrat presidential candidate's honesty was questioned by media personalities. Maxwell's point: Clinton, a woman of norm-breaking accomplishments and unquestionable integrity, was maligned by a false narrative created by the media, which didn't treat Trump as harshly. Why did Clinton lose? Not that Clinton had a long history of dissembling. Or that she didn't campaign in Wisconsin or other pivotal states. Or that Trump tapped into an anti-elite, blue-collar movement. It was the (sexist) media. What needs to be done, as I understood Maxwell, was to control the narrative about Trump going forward. Malign him and his supporters without pause. Shame anyone who doesn't agree.

I've been thinking about Maxwell's presentation lately, since its framework has been a big part of our political environment the past four years with the fruits of political polarization now in full bloom. An unceasing campaign against Trump has been waged to tear down him and anyone who even partially supports his policies. And Trump has counterpunched, poured gas on the fire, rarely rising above the politics -- and being largely ignored by most of the media when he does.

Indeed, has any politician obscured his own accomplishments by taking the opposition's bait so quickly and so often? Or been so one-sidedly portrayed by most of the elite media?

Thus, here we are, in a worldwide pandemic, with incendiary and destructive comments volleying back and forth between grudge-driven politicians. Pelosi. Trump. Schumer. Biden. The list goes on. Power is their game; and no charge against an opponent is out of bounds.

In 2012 when running against President Obama, mild-mannered, ultra-cultured GOP candidate Mitt Romney was derided by Democrats and a large part of the national media as a danger, a racist, a weirdo. Now, because he criticizes Trump -- regularly separates from him -- Romney is celebrated by the same people as wise and honest, a statesman. Many Republicans have learned, the only ones respected by the elite media are those who divert from their party -- or who die (although, death is no longer the same qualifier it once was).

Is it any wonder then that so many Trump supporters don't trust those who criticize him now -- whether it has to do with mask wearing (thankfully, Trump reversed himself on this Tuesday) or what federal officers are doing in protecting federal property in Portland? Trump's opponents, including many in the media, have been flushing their credibility for years. Why now should they be listened to? Meanwhile, Trump, in outrageous tweets and vain, undisciplined pronouncements, has flushed his own, and tainted those who periodically, for good reasons, stand alongside him. At a time when unity, empathy, and self-sacrifice are needed, we are left with discord, distrust and animus.

Our nation's politics of personal destruction and malignant charges is reaping what it has sewn.

Where is the way out? I can't believe it ... here we are approaching another binary election between deeply flawed candidates. Here we are, entering another August with the American political world on fire. Postelection, will this country have any healing? Or will it be denied again like it was after 2016?

Indeed, how much damage has (now) knowingly false charges of Russian collusion had on our nation's ability to work together and respond to the coronavirus?

Few people have clean hands. The pursuit of political power -- with the ends justifying the means -- will do that. And an endless outrage machine -- employed by both sides, churning and churning to raise money and indignation -- will do that. Is there an exit? Maybe it can be found locally, with people lifting each other up and pausing -- hesitating, suspending -- the brutal, caustic tearing down of others. Maybe it involves turning off the political diatribes on TV and Internet, disregarding the social media mania, avoiding the "news."

Be kind. Be encouraging. Hold to your principles. But don't think the worst -- or only the worst -- of those who disagree. There's plenty to dislike about anyone. It's finding the good -- and engaging with that -- that should be our goal.

View 49 comments or respond
Community discussion is important, and we encourage you to participate as a reader and commenter. Click here to see our Guidelines. We also encourage registered users to let us know if they see something inappropriate on our site. You can do that by clicking "Report Comment" below. Our goal is to create a place for robust and civil discourse about our community, state and nation.