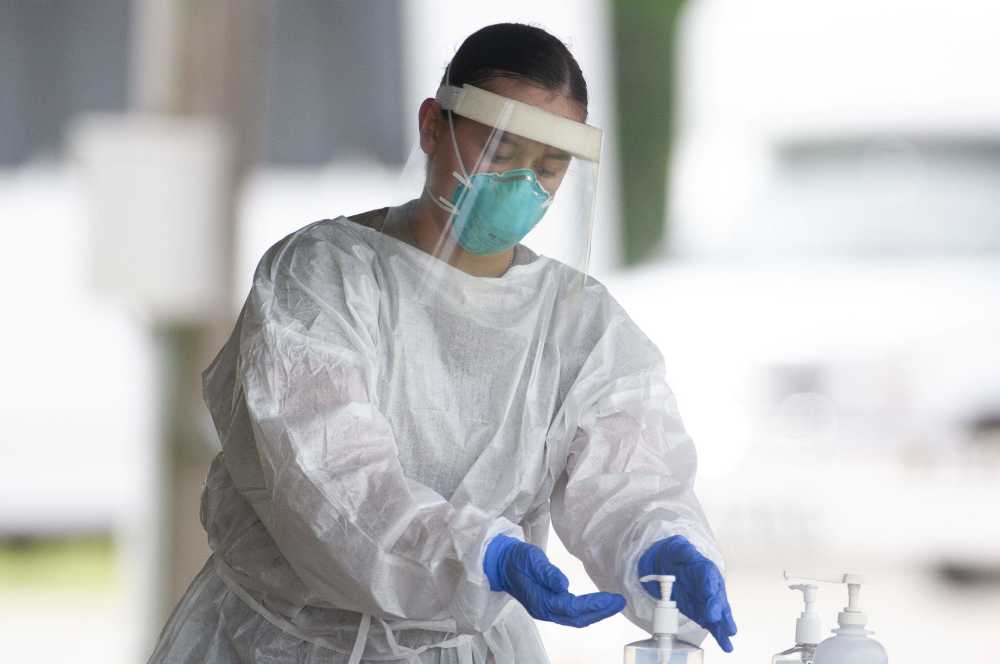 Health care providers have faced numerous challenges during the coronavirus pandemic. Not all have been health related.

When states began lockdowns in March, hospitals, expecting a wave of COVID-19 patients, began to suspend elective procedures to increase capacity. The good news: neither SoutheastHEALTH nor Saint Francis Healthcare came close to reaching their capacity, their CEOs told B Magazine. The bad news: by suspending elective procedures — the revenue-generating arm of their operation — the hospitals were dealt a financial blow.

The American Hospital Association reported that for a four-month period between March 1 and June 30, U.S. hospitals and health systems had financial losses totaling $202.6 billion, an average of $50.7 billion per month. Many hospitals were forced to make cuts, including furloughs of some employees. And some small hospitals in rural areas may struggle to stay in business.

Ken Bateman and Dr. Maryann Reese, the presidents/CEOs of SoutheastHEALTH and Saint Francis Healthcare respectively, spoke with B Magazine in June to outline the financial hit to their operations due to COVID-19. In addition to challenges, both executives shared stories of innovation and mutual cooperation that were to the benefit of employees and patients.

After weeks of postponements, Saint Francis resumed its elective procedures on April 27 with SoutheastHEALTH resuming on May 4. Even now as both hospitals near full operations, every patient is tested for COVID-19 before undergoing a procedure. As of early June, each hospital reported one patient who tested positive, resulting in a rescheduled procedure.

Bateman and Reese said the cooperation between the two health systems during the pandemic has been strong. One of the early collaborative efforts was COVID-19 testing at Arena Park. 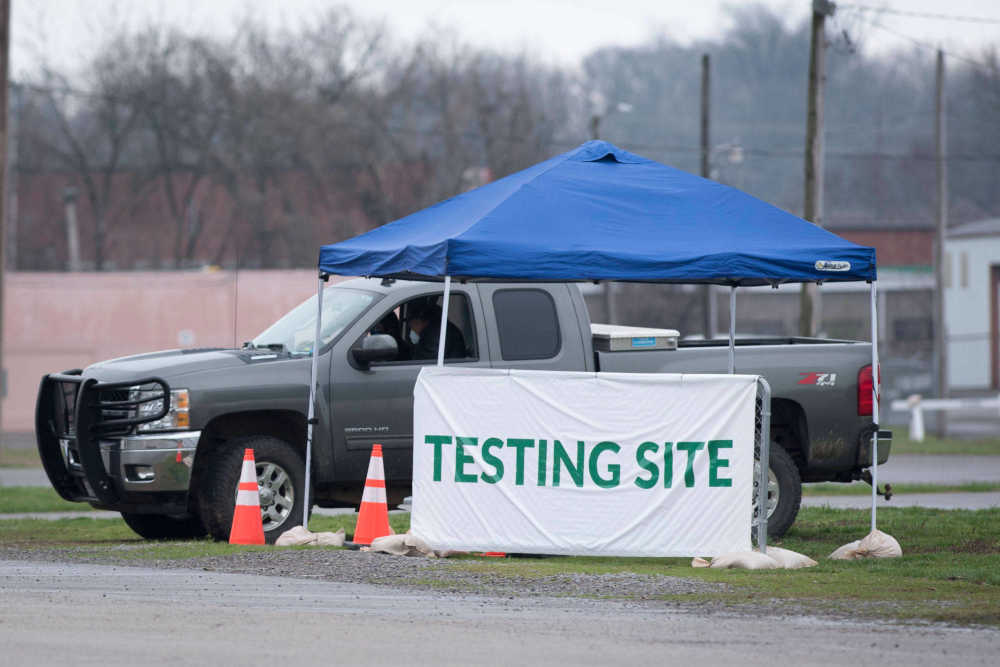 Workers are seen at a drive-through COVID-19 testing center in Arena Park, a combined among between Saint Francis Healthcare System, SoutheastHEALTH, and the Cape Girardeau County Health Department in response to the coronavirus.
Ben Matthews ~ Southeast Missourian
Order this photo

“I give Saint Francis a lot of credit for probably spearheading that process for everybody,” Bateman said. “But it was a collaborative effort. And I think it went very well for the community.”

Reese said she believes COVID-19 has brought the two hospitals together.

Even before the pandemic, the hospitals would share medications as needed, Reese said. They also transferred blood reserves between their facilities early on when there was a blood shortage, Bateman said.

Unlike hotspots like New York City, Cape Girardeau’s medical centers were never overrun with COVID-19 patients. Bateman said SoutheastHEALTH never had more than three to five patients in their COVID-19 unit. Reese said the highest number of COVID-19 patients at Saint Francis was 15 or 16, and at one point for less than 24 hours, the COVID-19 unit was empty.

Bateman said from mid-March through May, SoutheastHEALTH took a $15 million hit in revenue due to postponed procedures and reduced office visits.

“Now, we did receive federal stimulus money that's been able to cover that,” Bateman said. “And we expect that we can probably get through June to cover lost revenue, as well. As you know, we've also made some adjustments on our expense side. But we should be able to get through probably the month of June with a breakeven for mid-March through June in terms of lost revenue due to stimulus money.”

As of this interview in June, SoutheastHEALTH had received between $12 and $14 million in stimulus funds.

Some of the expense reductions came in the form of furloughs, particularly in areas that had to be shut down. Employees with HealthPoint Fitness, for example, were furloughed for a period of time while the centers were shut down. But for most employees, the hospital requested they take additional paid time off during April and May.

As of early June, SoutheastHEALTH was back to 75 to 80% of its normal volume. Bateman said he expected to be back at 90% by the end of June and hopefully full volume by fall.

Saint Francis’ volume dropped to as low as 40% during Missouri’s stay-at-home order, according to Reese. As of early June, the hospital was at about 80% of normal revenue.

Saint Francis declined to disclose the dollar amount received from the federal CARES Act, but issued a statement following the interview with B Magazine:

"Saint Francis Healthcare System received CARES Act stimulus funding," Reese said in the statement. " The payments were used to address expenses and support reduced revenues related to the coronavirus pandemic. The funds partially offset the significant impact of the pandemic.”

Reese said several St. Louis hospitals were hit even harder because of their increased COVID-19 patient volume along with not being able to proceed with elective procedures.

Reese said Saint Francis did job sharing during this period where an employee would work for one week, be off the next, and another employee who was working that week would pick up the responsibilities.

Some employees with Fitness Plus, which was temporarily shut down, were reassigned to positions such as screening patients and visitors at the hospital’s entrance.

“You look at Mercy in St. Louis and some of the big hospitals in St. Louis — they actually took permanent pay cuts,” Reese said. “You know, we did voluntary pay cuts. But that was more of the upper, you know, the administration and then the physicians because we wanted to be in solidarity with those people that are getting flexed and, you know, job sharing.”

Bateman said one of the biggest misperceptions in this area regarding COVID-19 was that Southeast Missouri would face a similar wave like some of the major U.S. hotspots.

“A lot of parts of the country didn't get hit with the type of volume of COVID cases that you saw in areas like Chicago, New York, New Orleans, some of the big cities,” Bateman said. “So that's probably one of the misperceptions here is everybody was anticipating a huge ventilator shortage, a huge bed shortage, staffing shortage, supply shortage, and it never materialized because we didn't see those kind of numbers. So, again, I think that the virus has taken, you know, a different toll on different parts of the country.”

Meanwhile, testing in Cape Girardeau County, for example, showed a low prevalence of COVID-19. And most of those patients were only mildly ill and not requiring hospitalization.

So how do you interpret that data?

“I think some of the conclusions around COVID, you're really just going to have to wait until you're a little bit further past the data points,” Bateman said. “Because otherwise, you may be just drawing invalid conclusions. So even though we had a very low prevalence during this wave, that doesn't necessarily mean if there's a second wave that we wouldn't see higher numbers.”

What the local data does provide is a baseline, Bateman said. That allows county public health leaders a way to evaluate whether there is a spike in cases based on the initial data.

Reese said the population density has played a significant role in Cape Girardeau County’s low prevalence, though she fully expects a second wave in the fall. The question, for her, is how big of a wave.

SoutheastHEALTH continues to test for the active virus along with antibodies. As the virus mutates, so do the antibodies. Working with a company called BioFire, they’ve added a new version of the antibody test to check for this mutation.

Both Bateman and Reese were complimentary of the local and state efforts, particularly on the communication side. One of the biggest challenges was sourcing the necessary supplies. Each system uses the company Vizient to purchase supplies. However, Bateman and Reese reported being approached by suppliers who said they could sell the hospitals N95 masks. The challenge was being able to check quality.

N95 masks are the standard for health care workers. Many of the suppliers were selling KN95 masks, which are not the same.

At Saint Francis, volunteers made masks using N100 material, an equipment sterilization material. The idea, Reese said, came from one of the hospital’s nurses. Now all of the clinicians, even on non-COVID-19 floors, wear these masks as a safety precaution.

Along with producing their own N95 masks, Reese said Saint Francis was able to access some supplies from the federal government’s national stockpile.

Finding face shields early on was a challenge for SoutheastHEALTH. One of the alternative sources for the hospital came via Southeast Missouri State University, where a team of engineers helped produce face shields using a 3D printer.

The future of telemedicine

Telemedicine became a necessity during the pandemic as patients sought this resource to avoid traveling to the hospitals for doctor’s appointments. SoutheastHEALTH and Saint Francis both indicated telemedicine will become more important in the future. Saint Francis is now using a telemedicine platform through EPIC, the hospital’s electronic medical record system, while SoutheastHEALTH is reviewing a few vendors as they seek to choose a common platform for all its providers by the end of the summer.

“Telehealth has been a part of this coronavirus process, and I think it's shown us that we really need to accelerate the process because, you know, there could be a second wave in the fall of the year that we're dealing with,” Bateman said. “But also I think just in general, I think the public is finally getting ready for the use of telemedicine, whether it's for convenience for access or whatever. I think telemedicine is here to stay.”

Reese said the CARES Act now allows hospitals to bill for telemedicine visits at the same rate as an in-person doctor’s visit. And with more advanced technology on smartphones comes more opportunity to expand the level of care. With the right attachments, providers can look in a person’s ear with an otoscope and listen to a heartbeat with a stethoscope.

One of the repercussions of state lockdowns and a general hesitance by patients to get out during the pandemic is undiagnosed health conditions.

“The problem with that is, as we all know, the earlier that you can detect a problem, the quicker you can treat it, and the better outcome you'll probably have,” Bateman said. “I was just reading an article where Mayo Clinic has been looking at studies that have shown that heart patient visits are significantly down, cancer patient visits are down. And again, it's because people are afraid to come out. But again, my concern is that by avoiding care if it's something that could have been detected and treated early, you may have a much more complicated situation by the time you come in and see that doctor.”

Reese echoed these sentiments, noting that major health issues didn’t decrease during the pandemic. Fewer patients sought treatment for these issues, which is a dangerous position to be in.

Precautions at both hospitals continue to be in place. Reese said hospitals are one of the safer places to come right now. Each person who comes through the door is screened, and everyone wears a mask. There are separate areas of the hospital and separate staff to treat COVID-19 patients. Plus, visitors who plan to stay overnight are tested for COVID-19, she said.

Reese is a big proponent of wearing masks and credits this practice for why there has not been a transmission of the virus between patients and staff at Saint Francis.

“People say, ‘How do you know that?’ Well, we know that because we trace anybody who is positive. We do tracers on them, so we know if somebody, one of our employees, has been sick. We know that it's been from a loved one at home that was sick. They didn't get it here. So we're very proud of that. And we think it's because of the masks,” she said.

One of the big discussions across the country is how to handle the return of students to colleges and universities this fall. Reese pointed out that college students are not a high risk, but they are a high risk of infecting those most at risk.