By Mia Pohlman ~ B Magazine 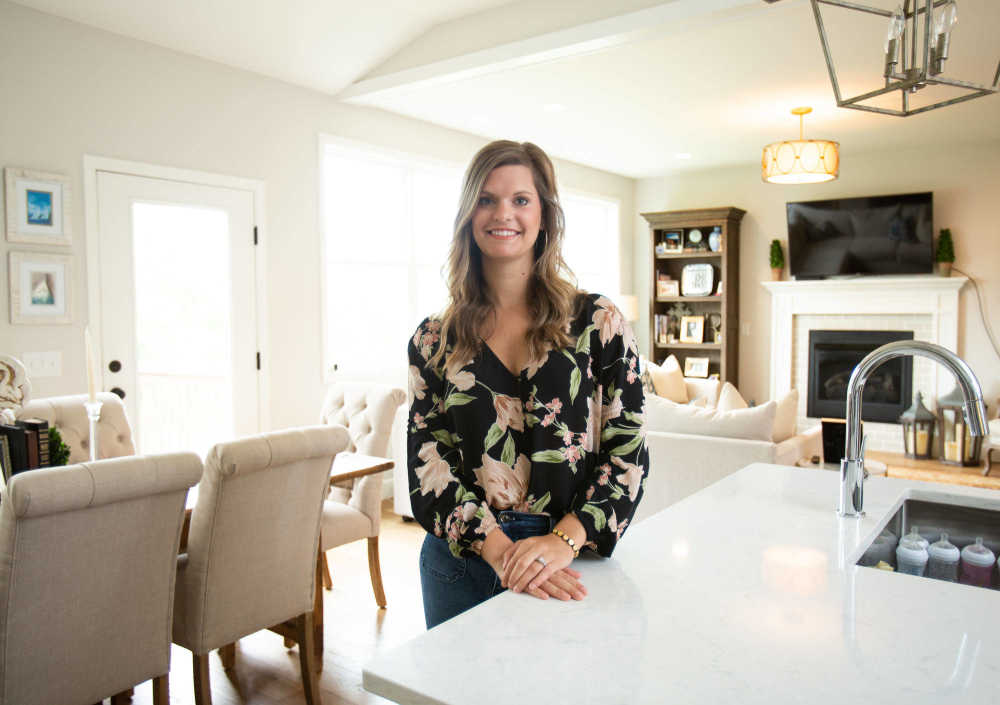 Caroline Harding-Ritter continues to move forward after a struggle with severe postpartum depression and axeity and continues to receive care from mental health professionals.

Inside these walls in Dexter are the most beautiful, broken people just like me. I never want to forget the feeling I have when I leave here.

It's a line Caroline Harding-Ritter, a resident of Cape Girardeau, wrote in her journal during her five-day stay at the Behavioral Health Unit at Southeast Health Center of Stoddard County in Dexter, Missouri, a stay brought on by her months-long struggle with severe postpartum depression and anxiety that began the day her daughter was born in October 2019. April 12, 2020, the day she arrived at the Dexter facility, marked the start of her healing process, the start of knowing people who helped transform her life, the start of living in freedom.

"It was the hardest thing of my life but the most beautiful outcome," Harding-Ritter reflects. "They brought me back to reality. ... I was just so mad and angry at that point of being there [and one nurse's repeated kindness despite my unkindness] started the whole process of 'We have you' type of deal. 'We've got you. All of us.' Every single one of them. Not only the doctors and the nurses, but also the techs, the cleaning people that were there, the people that held group therapy -- everybody played a part in my healing, every single one of them. Every single patient."

Harding-Ritter and her husband first realized something wasn't right during the days following their daughter's birth: Harding-Ritter wasn't sleeping and was hardly eating. Her doctor prescribed her medication that helped temporarily; however, during the next few months, being a new mom, a wife and working at her job as well as other life circumstances such as the onset of COVID-19 worsened Harding-Ritter's anxiety. She ignored the signs because she says she wanted to remain in control.

On April 11, she experienced suicidal thoughts and was manic and psychotic, although she didn't realize it. Her husband and family checked her into the hospital, and she was then transported to the facility in Dexter by ambulance.

When she woke up, it was a day later, and she'd slept better than she had in months. That, she says, is when her healing began.

"People ask me, 'What do you do there [in a psych ward] all day?' We eat together. We play games together. We drink coffee together. We walk together because that's the form of exercise that we can get. We listen to music together. We do normal things that other groups of people would do in a normal setting," Harding-Ritter says. "I don't think it is what people think it is. You can go there and lock yourself in your room and be completely isolated if that's what you want, but for me, every single one of the people that were there were my friends. Every single one. ... They carried me through my healing process."

Harding-Ritter says the number of people that came in and out of the behavioral health unit in Dexter during her five-day stay point to the need for more facilities like it in Southeast Missouri.

"People don't realize how much of a need there is," she says. "There's nowhere for people to go. I'm from right here in Cape Girardeau, and I had to go to Dexter. There's such a need for something like a behavioral health unit."

It's a need SoutheastHEALTH recognized in February 2019, when their partnership with Universal Health Services (UHS) was announced. Their solution: in February 2021 (the projected open date), a new, 102-bed behavioral health unit that takes a multidisciplinary approach to mental health will open in partnership with Universal Health Services adjacent to the Interstate 55 exit 95 in Cape Girardeau.

The facility will include four units: two adult-care units, one geriatric unit, and one child and adolescent unit. According to prior Southeast Missourian reporting, the hospital will offer child, adolescent and family counseling; treatment for depression, anxiety disorders and other common mental health issues; yoga and meditation; fitness/movement therapy; art and music therapy; group and individual therapies; and evidenced-based treatments such as Trauma Focused Cognitive Behavioral Therapy (TF-CBT), Dialectical Behavioral Therapy (DBT) and motivational interviewing. The average projected stay for patients is 10 days. The center will offer the most robust behavioral health care between St. Louis and Memphis.

According to previous Southeast Missourian reporting, Universal Health Services, a Fortune 500 Company, is the largest behavioral health provider in the United States, with more than 250 behavioral health facilities in 37 states. The company also operates several facilities in the United Kingdom, Puerto Rico and the U.S. Virgin Islands. In Missouri, UHS has locations in St. Louis and the Kansas City area, as well as in Illinois, Kentucky, Tennessee and Arkansas, but none within a 100-mile radius of Cape Girardeau.

The $33 million facility will employ approximately 180 clinicians, mental health technicians and support staff when fully operational. The Southeast Missourian previously reported, "Once fully staffed and operational, the hospital is expected to have an annual total payroll of around $9.5 million, including benefits. The estimated economic impact to businesses and industries in Southeast Missouri, using a Bureau of Analysis multiplier for the Cape Girardeau region, will be $38.9 million annually."

Through this collaborative effort, SoutheastHEALTH hopes to increase accessibility to mental health care, reducing the average wait time to see a psychiatrist, which, according to SoutheastHEALTH president and CEO Ken Bateman in a press release, is currently 10 to 30 days for adults in Missouri and up to six months for children and teens. It's too long of a wait for people who need help, and one the facility hopes to lower for the benefit of patients and the region.

Missouri Delta Medical Center's new adolescent unit is a response to a staggering statistic: in the state of Missouri, suicide is the second-leading cause of death among children under the age of 19, and since 2003, the rate of suicide in children and adolescents in Missouri increased by 129%. Furthermore, 20% of Missouri youth live with a mental health condition. Before the opening of this unit, young people from Southeast Missouri had to travel to Nevada, Missouri; Springfield, Missouri; or St. Louis to receive inpatient mental health treatment.

The community was the driving force behind making this unit possible: $1.6 million of the $2,586,692 project cost was raised by the Foundation through a community capital campaign, fundraising events and faithful employees. The Missouri Delta Foundation also received grants from the Mabee Foundation and Delta Regional Authority totaling $461,000. Thirty-seven jobs were created in Sikeston by the addition of the unit.

The unit provides intensive treatment for patients struggling with mood disorders, depression, post-traumatic stress disorder, anxiety, suicidal ideations and ADHD. Adolescents admitted to the program, Alcorn says, are usually experiencing a crisis or have become overwhelmed with personal or family problems. At the unit, adolescents receive psychological, behavioral and/or pharmacological interventions in a safe environment, a structured and supportive social atmosphere and intensive therapeutic intervention provided by psychiatrists, nurses, social workers, mental health technicians, activity therapists and certified teachers to assist patients in making a rapid and complete recovery in the region where they live, Alcorn says.

"The key part for this adolescent unit is that it's close to home, and we're able to provide this new service, and they're able to stay here close to their families so the families are able to be involved in treatment, as well," says Rowdy Phillips, Missouri Delta Medical Center psychiatric mental health nurse practitioner (PMHNP). "Whenever we're looking at the mental health treatment component, it's a holistic approach, really. If the family's close by and they're able to be a part of the treatment process, they're able to come for family meetings, they're able to travel here in a short amount of time, and they're not having to drive two and a half hours to St. Louis or across to the other side of the state to Springfield or to a whole other state like Memphis. That's just instantly better for the patient in the long-run. And then we're also able to provide them with outpatient follow-up with the discharge, which is, I think, another great component to our program."

Ultimately, it's about keeping teens safe and living free from addiction and self-harm, as well as helping them to stay in school to receive an education.

"The teens are our future. They're going to be growing up, going out into the workforce, so mental health as far as the adolescents goes is extremely important," Phillips says. "If we can help them be the best that they can be, ultimately we are shaping our future. We need to be able to get them the resources that they need, make them productive, help them reach their goals."

Although she has been released from the Behavioral Health Unit at Southeast Health Center of Stoddard County, Harding-Ritter is still receiving treatment in the process of healing. Although she describes herself as someone who normally does not share her struggles, she believes it is important to speak about mental health.

"How we end the stigma is we talk about it. We bring awareness. That's why I'm talking about it," she says. "If more people were to open up about their experience about postpartum depression and anxiety or depression, anxiety, bipolar disorder, schizophrenia, whatever it may be that you're hiding because you're scared and you're embarrassed because the world has made us feel that way, then that stigma will go away. So that's why I think it's so important for people who have experienced something like this to speak up and to not just brush it under the rug. We need to talk about it."

Harding-Ritter shares her story for women suffering with postpartum depression and anxiety who feel like they can't talk about it, for people suffering from mental health issues who feel like they have to hide it, and for her daughter, so she never feels like she has to hide something because she is afraid, embarrassed or ashamed.

"We as women and moms sometimes think that we can do it all, and sometimes we just simply can't, as bad as we may want to," she says. "If you are anxious, seek more help."

Harding-Ritter says she is grateful to the people who helped her in her healing process, including her husband, family, friends, psychiatrist, therapist, nurses, gynecologist and staff, and the other patients at the Dexter unit. She says the help she received from such kind, loving and knowledgeable people at the facility in Dexter is something she wishes for each person struggling with mental health at both of the new facilities in Southeast Missouri.

"It's changed everything. There's not one part of my life it hasn't changed," she says. "It's opened my eyes to how I view pregnant women, how I view people who have just had babies. It's opened my eyes to people I know who struggle with mental illness. Something isn't wrong with them; they're sick, and it's okay. Sometimes you need medicine when you're sick, and that's okay. It's changed the way I view the world. It's changed the way I view Cape Girardeau as a whole, just the need for a facility like the one that's being brought here."