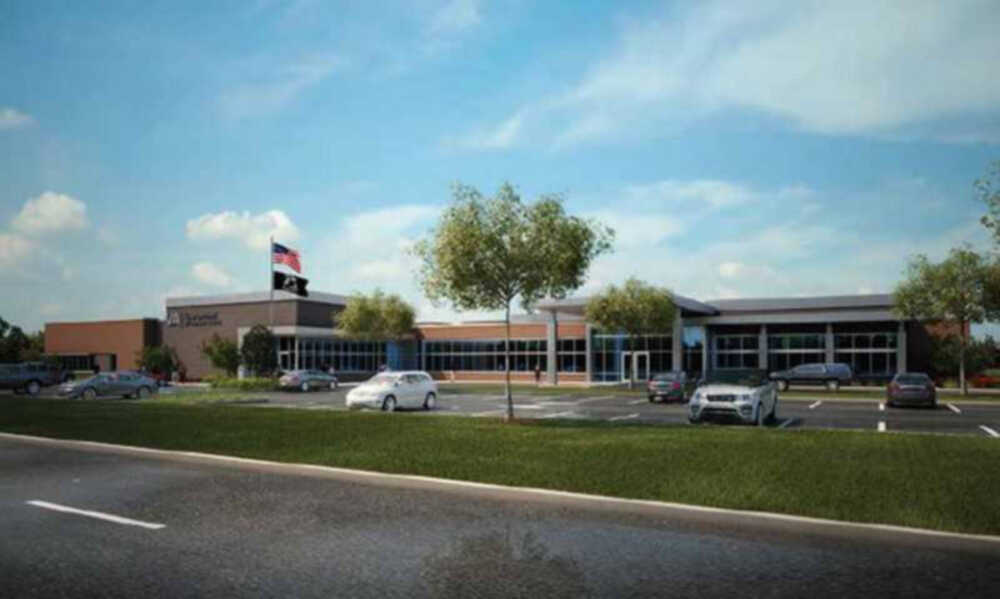 A rendering of the Veterans Affairs Cape Girardeau Health Care Center. When it opens, the $47.4 million, 45,000 square-foot facility will have between 100 and 125 employees with an annual payroll of approximately $10 million.

By and large, those have been the primary options for military veterans in this region in need of anything beyond basic health care services through the Department of Veterans Affairs.

That will change late next year with the opening of the VA's Cape Girardeau Health Care Center.

The VA has offered health care services in Cape Girardeau since June 2002 when it established a small clinic at the Missouri Veterans Home. Ten years later, the clinic moved to its present 8,000 square-foot clinic at 3051 William St. in front of West Park Mall, which has a staff of nearly three dozen and sees approximately 100 patients a day, mostly for primary care and mental health services.

"That's pretty much the maximum of its capacity due to space and service limitations," says Libby Johnson, associate director at the John J. Pershing VA Medical Center in Poplar Bluff.

Originally from Perryville, Missouri, Johnson lives in Cape Girardeau overseeing initial phases of the center's construction while also commuting to Poplar Bluff to handle her duties at the medical center there.

"Being from Perryville, I know here are a lot of veterans from that area who either drive to Marion or choose not to use the VA [for their health care services] because there's nothing close by," she says, explaining why the VA chose to expand its services in Cape Girardeau.

Johnson describes the region between St. Louis, Poplar Bluff and Marion as "no man's land" where the VA has not provided convenient, comprehensive health care services to thousands of eligible veterans.

"There are at least 10,000 veterans that are eligible in our catchment area that are not currently enrolled [for VA health care services]," she says. "Our goal is to enroll 3,000 additional new veterans into our system, and we know we have them here in Cape and the surrounding counties. That's what drove the initial approval by Congress for this project."

Although it received congressional approval in 2014, construction was pushed back several years for a variety of reasons, including what 8th District U.S. Rep. Jason Smith (R-Salem) described last year in an interview with the Southeast Missourian as "regulatory hurdles" and "red tape over construction requirements."

Despite initial delays, Johnson anticipates no additional hurdles in the construction timeline. "We're targeting being completed with construction late in 2021," she says. "Our goal is to be ready to activate as close to the end of construction as we possibly can."

When it opens, the facility will have between 100 and 125 employees, about 75% of whom will be clinical staff members and 25% of whom will be primarily administrative support staff. The center's initial annual payroll will be approximately $10 million, Johnson says.

"We'll have potential for a little more growth as we ramp up some additional services," she says.

While the facility will not offer inpatient care, its list of outpatient services is comprehensive.

"The new health care center will offer a much broader range of service [than what is currently available at the VA's Cape Girardeau clinic], including multiple specialties such as dermatology, cardiology, urology, gastroenterology, physical therapy, audiology and optometry and a full spectrum of radiology, laboratory and pharmacy services," Johnson says. "The clinic will also have the capability to double our primary care and mental health capacity in addition to offering the new specialty services."

Veterans are encouraged to enroll for VA health care benefits either online or over the phone "because we're trying to reduce contact due to coronavirus," Johnson explains. "And it costs nothing to enroll."

It's important veterans use health care services offered through the VA, she says, because it impacts the funding the VA receives to provide those services.

"The way the VA works, the more veterans that use our services, the more funding we bring to the area to serve veterans," Johnson says. "There's a misconception out there among veterans that if they don't need the benefits, they'll leave them for someone else, but it really doesn't work that way. The more [veterans] come in, the more benefits we get for the veterans in our area. Otherwise, it will just go to veterans in another service area."

Scheduling conflicts and the COVID-19 pandemic kept the VA from conducting a formal groundbreaking for the Cape Girardeau Health Care Center, but Johnson says it's possible "some sort of ceremony" will take place this fall to commemorate the center's construction.

"It will be nice to have people come out in the fall and have something physical for them to see," she says.