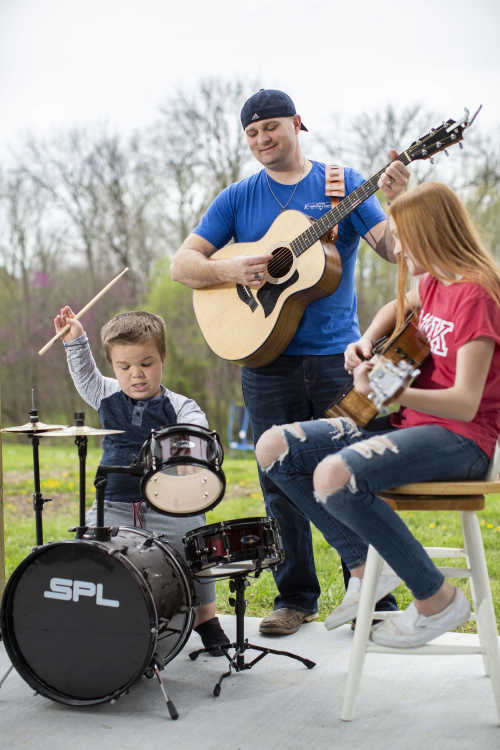 Dr. Greg Pursley, DC and owner of PC Wellness Centers in Cape Girardeau, plays music with his two children, Izaac on drums and Evee-Kay on guitar, at their home in Cape. Combining his two passions, Pursley is known as #TheSingingChiropractor.

You might know Dr. Greg Pursley, DC, owner of PC Wellness Centers, as #TheSingingChiropractor. It's the moniker given to him by someone who heard him play a show at the casino, where he often plays acoustic guitar and sings. Since it brings together his two passions, he decided to claim it as his own.

Still, the story of his chiropractic practice hasn't been one that is stress-free. If a family is struggling with something, Pursley and his family have probably been there, too.

Their story goes like this: in January 2007, Pursley and his wife purchased an existing chiropractic practice and moved with their daughter to Cape Girardeau from St. Louis. They had never been to Cape before and were excited to start their life here. In 2008, their son was born with dwarfism and spent his first six months in a St. Louis hospital. Pursley wanted to sell his practice so he could be with his family, but with the financial crisis of 2008, that wasn't an option. When his son was a year old, he was able to come home from the hospital while being monitored at all times. It was a difficult time for the family -- one of mental, emotional, physical and financial stress.

In 2016, Pursley's son was able to get the trach that had been helping him breathe removed, which allowed Pursley to "get back into business mode" and focus on growing his business again. He wrote the book "A New Kind of Normal: Families Understand Dwarfism," to encourage other families undergoing difficulties.

Helping people heal through music, chiropractic and uplifting words is what Pursley's life is all about. It's the goal of his practice.

"You can overcome your own obstacles, and you can grow if you focus on the right stuff," Pursley says. "You can heal. It's all about healing and results."