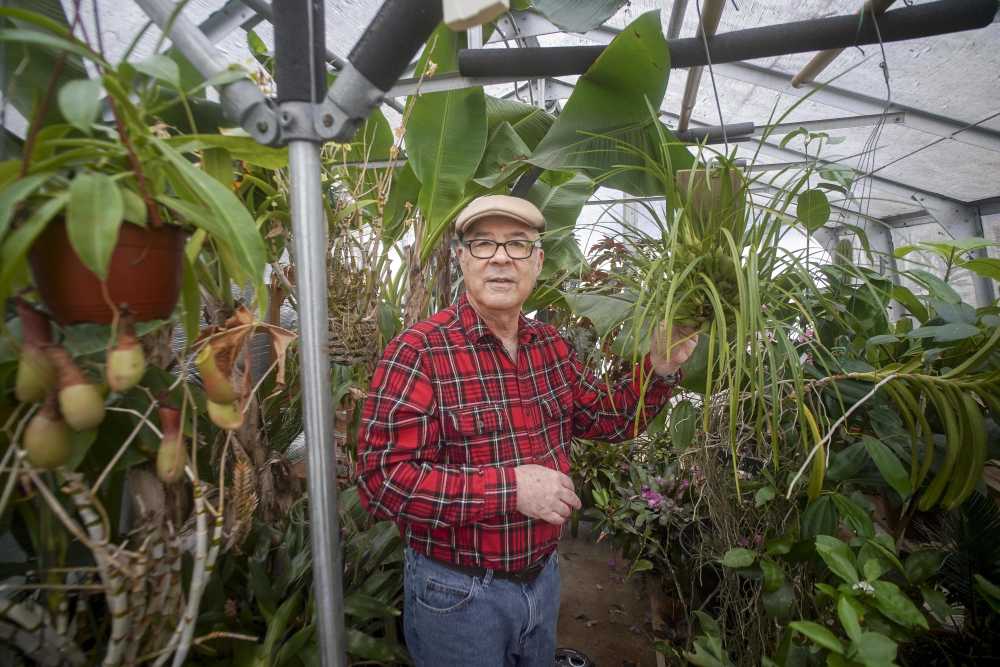 Dr. Jim Hoffman first became interested in tropical plants as a child, when his grandfather who overwintered in Florida brought home tropical fruits and plants in the springtime. He says he was "immediately interested" in the unusual plants with the exotic taste, and so his father built a small greenhouse for the plants.

Today, Hoffman has his own fiberglass 14-foot x 14-foot greenhouse in his backyard in Cape Girardeau. It is filled with banana plants, pineapples, orange and lime trees, gingers, bromeliads, elephant ears, taro, croton, and terrestrial and epiphytic orchids from around the world. He also has a small collection of cacti and succulents. Most of his plants are from Central America and South America, and he also has a few orchids from Southeast Asia.

In addition to caring for tropical plants in his greenhouse, Hoffman also loves to travel and goes on several medical mission trips each year. For the past eight years, he has traveled to Honduras for this endeavor, and although he has been on medical mission trips to countries in Africa before, he recently began a mission in a village in western Kenya that he is especially excited about. Through his travels, he often explores the local flora of the area he is in.

Over the years, Hoffman says he has learned to care for his plants from online sources, books and trial and error. He purchases the majority of his plants online from tropical nurseries and a few from local nurseries. His enjoyment, he says, comes from the challenge of manipulating the light, temperature, humidity and air flow to produce flowering and fruit. He also enjoys sharing with others his extensive knowledge of his plants and how to care for them.

"I like the challenge of pediatrics, and I like the challenge of growing tropical plants," Hoffman says of how working in a greenhouse and working as a pediatrician go together and give life to each other. "I get rewarded when I see one of my kids get better from, say, strep throat ... and I get a reward out of harvesting from my plants. So that's why gardening and growing in a greenhouse is so important, because it gives me a challenge, and I get a reward."