Local heroism in an age of celebrity culture 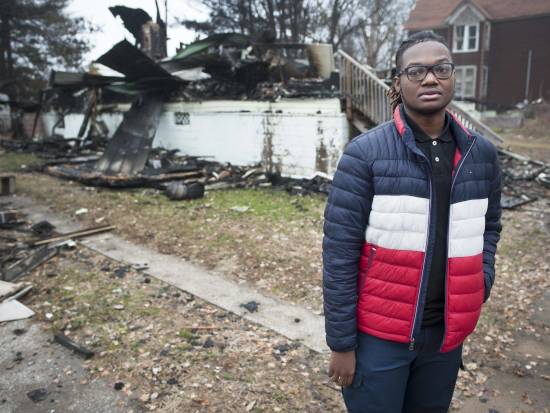 Riko Nelson stands near the remains of a home at 2415 Park Ave. in Cairo, Illinois, on Jan. 14, 2020. As flames began to engulf homes across the street a Thursday earlier, the senior Cairo High School basketball player leaped into action and evacuated a family of three from the home before it was burned to its foundation.
Ben Matthews ~ Southeast Missourian
Order this photo

There is a part of our culture that reveres celebrity — and bravado. One could even say a mark of the modern era is the dominance of celebrity culture, where individuals thrive commercially by turning fame into personal brands, which are then leveraged for money and more fame.

Not long ago, the billboard for this culture was the Kardashians, a family largely famous for being famous. But how they profited on that fame! Donald Trump, the real estate developer and reality TV star, leveraged his fame and frequent television presence to become president of the United States. Colin Kaepernick, a good but not great football player, is said to earn more from infamy as a protester than he could playing ball, which incidentally takes a lot more hard work.

Most recently, the duke and duchess of Sussex — also known as Prince Harry and Meghan — copyrighted hundreds of royal terms with the plan to create their own business line, separate from (and independent of) the Royal family, but dependent on their fame and celebrity. Some business analysts predict they will make billions.

Such fame — and the accompanying fortunes — frequently lead others to view the loudest of celebrities as heroes.

And yet, day-in-and-day-out, most of us understand the biggest heroes are those who do what's right when no one is looking. And when these individuals are caught in the media glare, they don't change. They do good and important things — and are humble about it.

Three local individuals, caught in the media spotlight last week, exhibited the best of this trait.

Riko Nelson is a high school senior in Cairo, Illinois. When Riko noticed the house across the street from his home in flames, he called 911, then ran toward the blazing fire and awakened the family sleeping inside by banging on the door. According to a story by Ben Matthews in the Southeast Missourian, "Tyrus Davis, Yolanda Lyas and her 14-year-old daughter, Gabriella, escaped with their lives after being evacuated by Nelson."

Riko wasn't done yet. The fire had originally spread from another house because of high winds. He ran there, too, and kicked in the door to make sure no one was inside. Thankfully, the mother of the family was at work and her children were at their grandparents.

Confronted by questions of his heroism, Riko, a basketball player at Cairo High School, simply said, "It's a blessing that everyone is OK, and that's all that matters."

Another local individual in the news was Brian Eggers, an officer with the Cape Girardeau Police Department. Through his involvement with the Alcohol, Tobacco and Firearms Task Force, Eggers helps target the most violent offenders — primarily in Southeast Missouri, but cases have led him to St. Louis and Arkansas — in an effort to reduce violent crime.

Last week, Eggers was recognized as a distinguished officer by the U.S. Attorney's Office for the Eastern District of Missouri during its annual award ceremony in St. Louis. According to a story by Nicolette Baker, the 20-year veteran of the U.S. Air Force Security Forces and five-year veteran of Cape PD has seen about 100 cases in his two years conjointly with the Bureau of Alcohol, Tobacco, Firearms and Explosives.

His response to the award?

"I don't do anything alone. It's because of the officers out here on the streets, the agents in the office and the officers in the surrounding counties," Eggers said. "I'm surrounded by a whole bunch of really hard workers -- they deserve the recognition as well. It was very humbling when I got notified."

The third individual recognized was Butch Meier of Jackson, who was named Cattleman of the Year at the Missouri Cattlemen's Association convention in Columbia, Missouri. Since 1956, when his parents purchased a registered heifer for him for a 4-H project, Meier has raised Angus beef cattle. Over the years, he has been president of both the American and Missouri Angus Associations -- and recently served two years as executive chairman of the executive committee of the Missouri Cattlemen's Association. Quietly, he has helped promote the interests of farming in the state and across the nation, and he has introduced countless children to farming locally.

When notified of the award, he said, "I am honored and that's all I can really say. Truly honored." For a video recognizing Meier, see this column online for a link. In it, you will learn about the joy he has farming and working with his family.

This column started with fame and fortune and the dominance of celebrity culture, where the loudest are often the most revered and braggadocio is rewarded. My sense, though, is that around here we recognize that the truly heroic and richest are not those with royal titles (who struggle to find their way) but those who quietly and confidently do what they love, helping others, and who step up courageously in big ways when needed. Congratulations to Riko, Brian and Butch.