Wandering reflections about a trip to Seattle, returning home to a new year 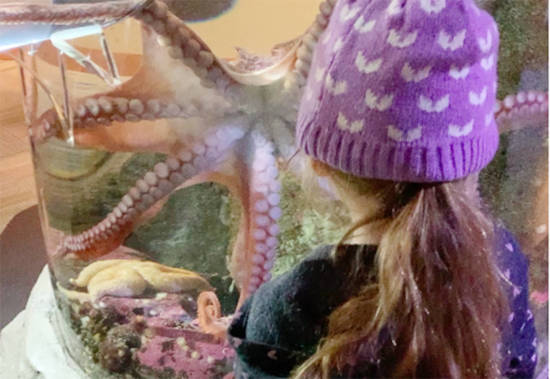 Liza Rust, 7, with Freckles the Octopus at the Seattle Aquarium.

I spent much of last week accompanying my wife Victoria to an academic conference in Seattle. Joining us was our 7-year old daughter, Liza, who showed the patience of Job sitting through her mother's panel. Some of the presentations were in German, and let's just say they weren't the most riveting engagements -- even though to me it's fascinating how so many talented professors talk openly about using courses such as language instruction as a vehicle for ideological indoctrination. Education is so much more complicated -- and questionable -- nowadays.

The little one started off listening intently then began to droop until her mother began. Then she was all big eyes and attentive ears. At the end of the panel she popped up to the front and gave her mom a hug. It was a special moment. Seeing the delight and pride children have in a parent is awesome. It was a reminder that activities such as "Take Our Daughters and Sons to Work Day" can have deep value. This year: It is April 23.

Last week I wrote a quick column about "the golden age of restaurants" in downtown Cape Girardeau. It blew up online -- shared prominently on Facebook. Two restaurants I left off my list were The Spanish Street Farmacy and Social's Cafe & Coffeehouse, the first of which I've never visited and the other of which has been years since I was there. Both were brought to my attention by readers. Social's was touted in particular for its desserts, while The Spanish Street Farmacy in photos online is just gorgeous in its offerings of farm-to-table fare. Its shop has an early 1900s theme featuring a soda fountain, microcreamery, bakery, luncheonette and fresh herbs and spices. I'm still on my "Daniel fast," so I'm not eating out yet (sort of), but I look forward to trying The Farmacy and Social's soon.

The "sort of" refers to my time in Seattle. Although we mainly ate at vegan restaurants (sticking to our fast from meat, milk, sweets, etc.), we made an exception to enjoy the local raw oysters. Daughter Liza tried her first one -- and after swishing it around, spit it out. Not that it tasted bad. "It doesn't have any taste," she said. It was "the texture."

Wise counsel I've tried to adopt -- thank you my wife (and countless parenting articles) -- is that "experiences are more important than things." Especially experiences together. A few of the reasons: research indicates that while happiness provided by material possessions is short-lived, satisfaction with experiences increases over time. Experiences provide better memories (even if at the time, they aren't perfectly successful). Experiences don't clutter the home. And they connect people -- and families -- to each other in mindful ways.

Besides my wife's presentation, three of the highlights of the trip were visiting the Seattle Aquarium, the Pacific Science Center and the Chihuly Garden and Glass museum.

All three of us could have spent hours just watching the female octopus "Freckles," as she moved around her aquarium. She was beautiful. For a video I took of her, check out this column online. The glass museum, meanwhile, tracks the innovations of famed glass artist Dale Chihuly. You can see a few of his works in St. Louis at the Missouri Botanical Garden in Shaw's Park. But to see an entire museum dedicated to his creations -- and the different themes and techniques he used -- was remarkable. The colors and shapes are vibrant, stunning, ethereal -- and they enthralled even little ones. If ever in Seattle, don't miss visiting "Chihuly."

As for the science center -- which my daughter and I tackled while Victoria was busy with conference obligations -- it was full of activities: from virtual reality games to laser shows. Above all, though, Liza wanted to spend much of our time building electrical circuits, something she can do at the Discovery Playhouse in Cape. She was in charge of this part of the day. So we did, and we were both thrilled. If you haven't been to Discovery Playhouse recently with your kids or grandkids, go. You will love it.

Of course, it rained nearly the whole time -- and afterwards, we laughed about how wet and cold our feet had been (though it wasn't fun in the present). Another recommendation, if ever in Seattle: Be sure to bring a pair of waterproof shoes.

To close the trip, with Liza as our navigator reading the flight board and leading us to our gate, we flew back to St. Louis on Sunday. Football was definitely part of the atmosphere. Fans from Seattle were wearing Seahawks jerseys throughout the airport (and a few on our plane) while Chiefs' garb was popular in flight and at the St. Louis airport. Southwest now enables free movies and live TV en route, thus, many of the screens on board were tuned to the Chiefs-Texans game. Unfortunately, maybe because so many were watching, the connection went out every few minutes and some of us gave up trying to reconnect as Kansas City fell behind 24-0. Instead, I went over Liza's homework, which she had diligently completed.

Holy Moly, upon landing KC was up 41 to 31 and anyone who likes football knows they would go on to win 51-31, setting numerous records along the way, including first team to trail by 20 points in a game to go on to win by 20.

Was it only a year ago many of us were lamenting the Chief's loss to the Grumpy Lobster Boat Captain and GOAT Tom Brady? All hail Paddy Mahomes (one of the football players my girls seem to remember.)

It's good to be back in Cape. It always is. School is back in session. College students will return soon. A new year has begun. May it bring you -- and everyone -- peace, love and much joy.