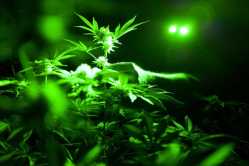 Licenses for 86 infused medical marijuana-manufacturing facilities in Missouri -- including one in northern Cape Girardeau County -- have been approved by the Missouri Department of Health and Senior Services.

The license approvals, announced Friday by DHSS, are one more step in the state's process of establishing a system for the cultivation, manufacturing, testing, transportation and distribution of medical marijuana-infused products in the Show Me State.

Marijuana-infused products include items that include medical-grade marijuana or a marijuana extract and are intended for use or consumption by a means other than smoking. They can include edible products, ointments, tinctures and concentrates.

The 86 licenses approved by DHSS were selected by means of a scoring system from among more than 400 applications from various entities across the state that had expressed an interest in producing marijuana-infused products.

In the Cape Girardeau area, a license for an infused medical marijuana manufacturing facility was granted to Holistic Health Capital LLC along State Highway B in northern Cape County. Licenses for medical marijuana cultivation operations were approved last month for addresses adjacent to the Holistic Health Capital location which, although it has a rural Perryville address, is actually in Cape Girardeau County.

According to information supplied by DHSS, applications that were not approved were denied because they either did not meet all eligibility requirements as prescribed by the state or they did not score high enough in the state's application ranking process. A description of the state's application review process can be found on DHSS's medical marijuana website, health.mo.gov/safety/medical-marijuana.

In December, DHSS has approved licenses for medical marijuana cultivation and testing facilities as well as marijuana transportation operations. DHSS is expected to release a list of approved dispensary applications Jan. 24.

Do you crave business news? Check out B Magazine, and the B Magazine email newsletter. Check it out at semissourian.com/newsletters to find out more.