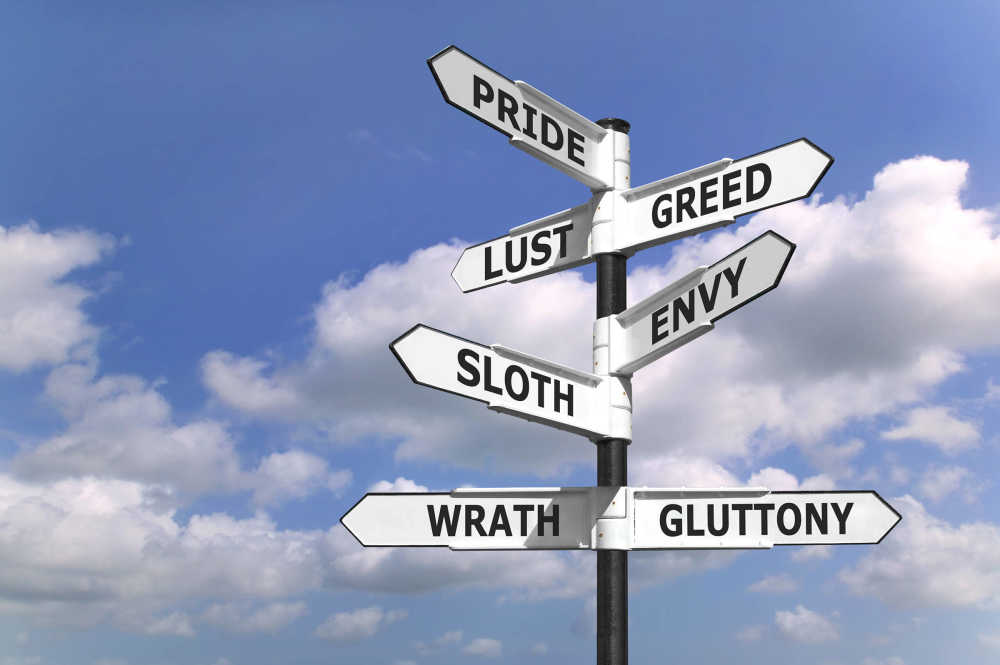 There's nothing wrong with the idea of Facebook, for example, but in practice, social media platforms are usually designed to exploit human weakness, distracting us from greater potential.

The graphic popped up on my wife's Facebook newsfeed the other day: The Seven Deadly Sins of social media. It was too funny not to share, because the kernel of truth in the joke made it resonate. Each sin was assigned a social media or digital platform.

"Lust" was represented by Tinder, the app where many people nowadays -- single or not -- go to meet strangers who might be interested in "hooking up." The matchmaking site promotes itself as not requiring a heavy investment of time. No questionnaires to fill out; it's mainly photos. See the face (or body) of someone who appeals to you, swipe right, and if they do the same, presto, you're introduced. As Ellen DeGeneres once said, Tinder is "a place where you can find true love, sometimes twice in one night."

"Gluttony" was assigned to Yelp, the app particularly famous for crowdsourcing restaurant reviews, featuring millions -- billions? -- of food photos. From stacked, juicy sandwiches to chocolate-drenched multilayered cakes, the site beckons users to eat and, perhaps, gorge. Because "gluttony" is bigger than food -- it means the inordinate desire to consume more of anything than is required -- another site I might swap for Yelp is Amazon, the shopping site where anything can be bought -- and hours can be spent simply looking.

"Greed" was attached to Linked-in, though this connection is the most tenuous of the groupings to me. Linked-in is an app promoting business networking and career development, so in the sense some people think all business is somehow tied to greed, it works. I wonder if a gambling platform -- even a sports platform like FanDuel -- might be more appropriate.

With "sloth," the graphic nailed it: Netflix. Although not a social media site, it's a platform where adults can disappear for hours, day-after-day, bingeing on the latest new series or tapping into something from the past. Either way, productive work -- physical or spiritual -- is avoided.

As for "wrath," President Trump certainly knows it. It was Twitter, where millions of people righteously scorch others for little good purpose.

Facebook was the home for "envy." While most users understand what is posted is usually only the positive -- or flattering -- parts of life, psychologists note people still desire what they see there and allow themselves to become convinced others are smarter, luckier, more attractive. It's also the site that coined the term "Fear of Missing Out" (FOMO), where no matter what some people choose to do, the site shows them something else they might have been doing that appears better, ruining even intentional decisions.

"Pride," meanwhile, was represented by Instagram, the image site owned by Facebook, where many people, especially millenials, seek to show themselves in glamorous and often altered -- enhanced -- ways.

It's easy to think the list of seven deadly sins originated in the Bible. And, certainly, there are verses that touch upon all of them. But it was a monk in the fourth century, Evargius Ponticus, and then Pope Gregory 1, two centuries later, who put them specifically in a list. Dante, in his work "Purgatory," and Chaucer in the "Canterbury Tales," elevated the list of deadly sins further, and from there it has become a theme periodically called upon in art and culture.

Curiously, in 2011, Reid Hoffman, one of the founders of Linked-in (and an early investor in Facebook and Paypal and more than a hundred other tech startups), told the Wall Street Journal: "Social networks do best when they tap into one of the seven deadly sins." Indeed, Hoffman seemed to suggest using the concept of tracking temptation to "sin" as an investing principle. 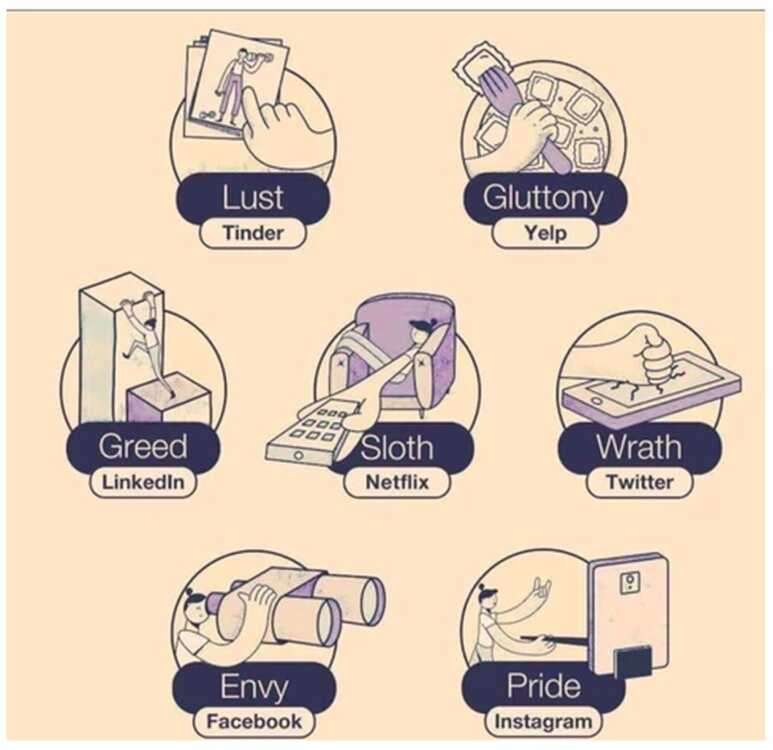 Nothing is new about the deadly sins. Men and women have been succumbing to them for ages. And, thus, the graphic is not only amusing, it's also a warning. Much of modern technology -- and culture -- is designed to lure us into excesses: too much of even a good thing (most of these sites) becomes dangerous, especially when they tempt us away from virtues.

"But the fruit of the Spirit is love, joy, peace, patience, kindness, goodness, faithfulness, gentleness, self-control; against such things there is no law" (Galatians 5:22-23).

As we enter the holiday season -- and the advent candle for "hope" is lit -- it's a good time to reflect on where the seven deadly sins fit into our lives and what we should do to combat them. Turning off our phones more often -- and setting them aside to spend time directly with friends and family or, even, serving others -- might be a good place to start.