Last week an acquaintance sent me a text with the photo of a column I wrote more than 25 years ago, February 1993. Among his comments: "Jon, you wrote this special article quite some time ago. It reached my heart. I'm thankful you wrote it. I've lost a number of friends and students along the way to drugs and poor life choices. I thank God for rescuing me. I was headed that same way."

The column is about a friend, whom I still think about, and how I failed to act. Here it is, as raw to me now as it was then. Its message remains timeless.

Goodbye, my friend, peace be with you

For a long time I carried in my wallet a scrap of paper with a boyhood friend's name and phone number. It was just a small piece of paper, worn soft by time.

For months I would forget the note was there. And then, I'd find a lump in one of my wallet's pockets, and I'd pull out the scrap of paper from where it had been hidden, crumpled, behind a credit card.

Yet I never acted upon the note. I never made the phone call.

Last year I ran into my friend. It was after the Martin Luther King service at the First Presbyterian Church.

He asked how I was doing, and I said well. I enjoyed my work, and I was happy to be back in Cape. "Most activities are centered around families here, which makes life for a young, single man tough sometimes," I said. "But I like the atmosphere. There is something wholesome and good about Cape."

He didn't react, but just stood nodding, looking around him, looking at me, looking at his shoes. I told him he really looked fit, bulked up.

He said he had a little girl. I congratulated him and wished her the best. He nodded and looked down at his shoes again, and then at the other people leaving the church.

"You couldn't do me two favors, could you?" he asked. And I knew right away what the first one would be. It was the reason I had kept the note in my wallet for so long.

I was the one now shuffling my feet, because he was right. Years ago I had promised to search for those pictures, shot as a photographer for the eighth and ninth grade newspaper, now buried deep in papers I wasn't sure where.

I'd try to find them, I told my friend. I'd try, I promised to myself, because I could see how important they were to him. But it was sad to think about -- his "glory days" -- as if the future held only dreariness and pain.

He smiled and thanked me. And then he got serious again, and he leaned in close.

"I wonder if you could do me another favor," he said.

I told him I didn't know what I could do. I suggested a couple names to him at Cape Central and the superintendent's office. I suggested he talk to Calvin Bird at the Civic Center. Then I looked hard at him and saw a person I wasn't sure was clear of drugs.

"I'm clean," he said. "But it's bad stuff. I'd like to tell the kids." He looked around again at the other people. "Don't forget about those photos," he said as he walked off.

That was a year ago. Although I promised, I never specifically looked for the photos. While cleaning up some boxes in my attic just after Christmas, though, I happened across them. I pulled them out and planned to send them to my friend when I returned home from a vacation.

But now it's too late.

It turns out my boyhood friend did some pretty bad things the past few years. Not only did he let himself get mixed up with drugs, but he mixed other people up with them, too. And he was fit, bulked up. But that was in part so he could beat up other people, which he did as a "collector."

Between drugs, stealing and beating people up, my boyhood friend was leading a menacing and destructive life.

His father tells me he told his son, "You might be able to whup up on those kids, but you can't whup up on a bullet."

A joint friend of ours told him, "You think you're bad. But one day you'll meet somebody badder."

The message from both of them was basically the same. And both turned out to be true.

I never sent my friend the photos he asked for. Three weeks ago in Sikeston, my friend was shot dead. One of the kids he had beaten up there, so the story goes, had gone home and gotten a pistol.

He was buried before I found out.

Also, I'm sad and angry that a year ago I wasn't there listening closer to what he was saying.

As I think about my friend, I can't help remembering his "glory days," too. That's when I knew him -- as we competed against each other in little league baseball or played flag football together. I remember especially how we would select each other at lunch break for pick-up basketball games. Or how we would jump into Coach Bullock's car after football practice for dinner -- and a time to tell tales.

I also remember the times in junior high school when he stood up for me in a crowd, when I needed someone there.

He's dead now, his glory days long sold out to drugs and other trouble.

Please, if you have a little scrap of paper in your wallet with the name of a friend who needs help on it -- don't wait.

And if you don't have such a scrap there, let me offer you one. Tear off the corner of this newspaper and write simply, "Help Another." And put it in your purse. Put it in your wallet. Let it be a reminder that there are those out there who need you. Help them when you have the chance.

Help them always with your prayers. 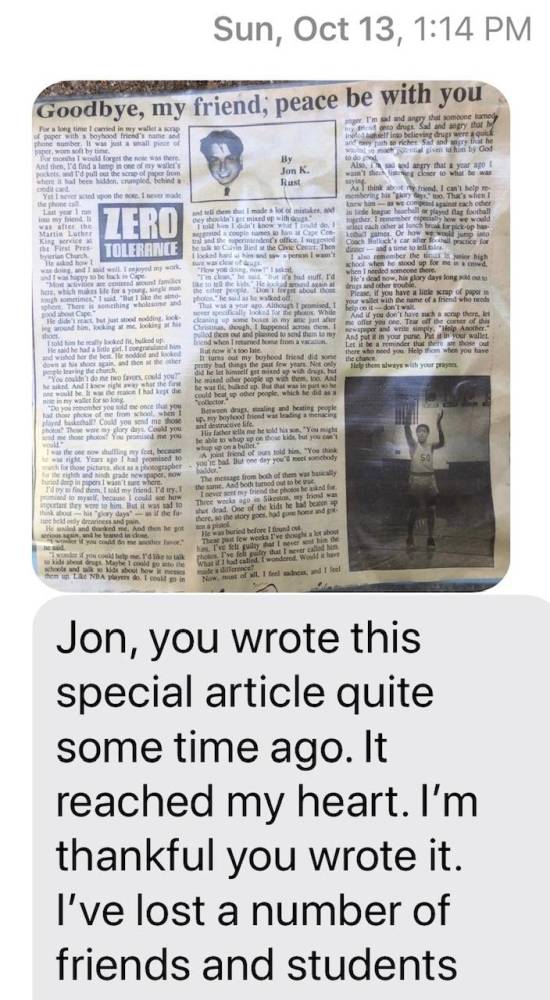