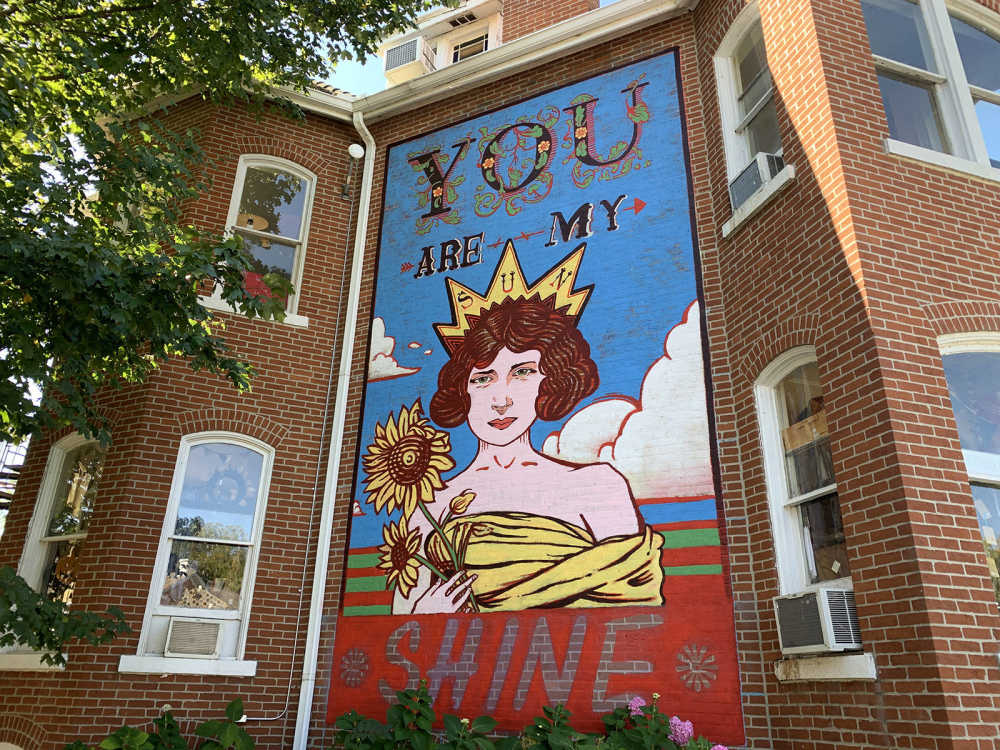 Strong, independent, upbeat and alluring, a new woman rules elegantly over Cape Girardeau. You can see her framed by foliage on the side of The Indie House at 605 Broadway, a beautiful new mural painted by Southeast Missouri state alumnus Terry Davis, which features a young woman wearing a crown that harkens Lady Liberty, holding sunflowers, in front of billowy clouds with the words "You are my sunshine."

Davis told Arrow reporter Daria Lawson for a story that appeared in the Southeast Missourian that he designed the image to represent the character of the business, as well as the personality of its owner, Laurie Everett, who commissioned the mural.

The Indie House is a collaborative retail and creative space featuring independent businesses -- women owned and inspired -- including Mother Earth, Fudio, Brickwood Boutique and High Street Station. To step inside is to be transported to a friendly sanctuary of art, fashion, fragrance, jewelry and more. Everett, meanwhile, is an inimitable personality -- a former Army military police officer with a creative and adventurous can-do spirit -- who has done much to improve downtown Cape Girardeau through her entrepreneurial success and volunteer service. Along with The Indie House, she owns the curiosities shop catty corner to it, Annie Laurie's eclectic emporium, and for many years served or has served on the boards of Old Town Cape, the Cape Chamber and the Downtown Cape Girardeau Community Improvement District. Those who drive Broadway will also recognize her shop's mannequin, showcasing different fashions on the street bench in front of Annie Laurie's.

Everett told Lawson, what prompted the mural is the legacy she feels artwork holds in the downtown area.

"If you walk around downtown Cape, it's easy to see our history of great mural art," Everett said. "From the Coke sign by Port Cape to the music heritage sign on the side of Shivelbines, I really wanted to continue the tradition of putting art at the forefront of downtown Cape Girardeau."

Congratulations to Everett and Davis -- and those affiliated with The Indie House -- for enhancing the artistic legacy of Cape Girardeau. For those who want to take a piece of that home, posters of the mural are even on sale inside. Stop by The Indie House to support local businesses -- and owners -- who care deeply about the spaces we live.

Talking about local stores and inspiring owners, Cape Girardeau is also blessed to have Deb Maevers and Pastime Antiques. Maevers founded the VintageNOW Fashion Show, celebrating its 10th year this year, to support Safe House for Women. This dazzling, empowering extravaganza will take place on Saturday at the Show Me Center. Doors open at 6 p.m.; show starts at 7:30 p.m. Its theme: "Heroes and Legends." More about the show tomorrow; or read Josh Hartwig's story from this weekend at semissourian.com. For tickets, go to vintagenow.org.

Finally, a fun way to see the new mural (or get some exercise before the fashion show) could be participating in a 5K run or 1-mile walk this Saturday to support Christian education in the area. Sponsored by Cape Christian Community School, the certified 5K race goes from Ivers Square up Broadway -- past the new mural -- to and around Capaha Park and back again. Registration is only $10, which includes food and post-race fun.

Registration on Saturday is from 8:15 until 8:45 a.m. at Ivers Square next to the Common Pleas Courthouse. Race begins at 9.

It's a picturesque route in the heart of downtown Cape. Weather looks to be perfect. Join in if you can and support an important cause!