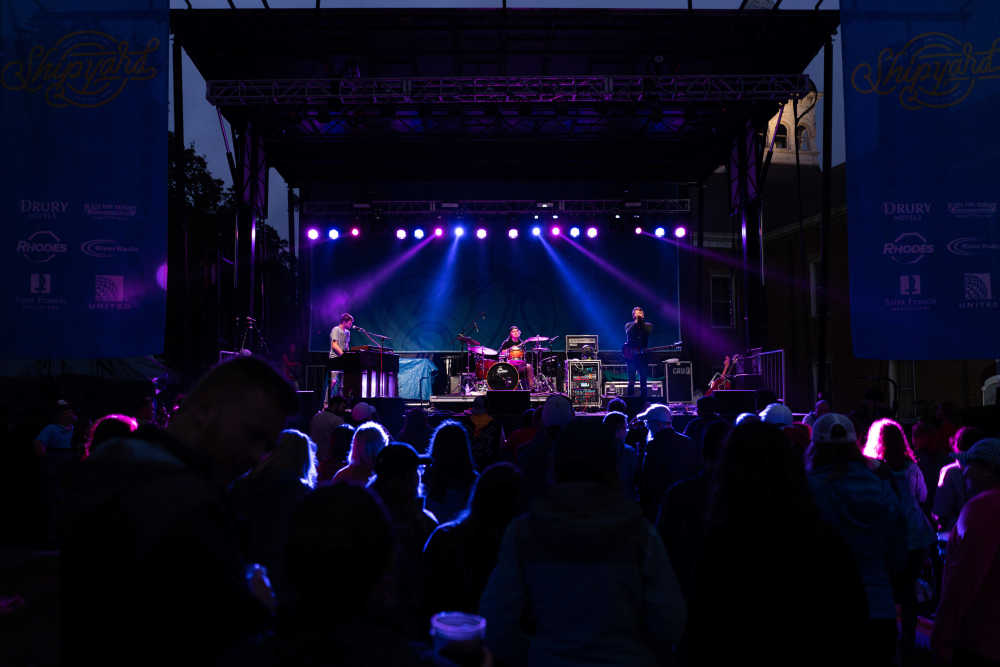 Turns out, the music festival goes back to the ancient Greeks at Delphi in the 6th Century B.C.: they held multiple-day events that included music and athletic competitions. Throughout the Middle Ages, Celtic and Gaelic cultural fairs promoted music, with a dance competition as the main event. In Europe, large gatherings of the upper class listened to classical music. Throughout the 1960s, music festivals were a way to express countercultural views, meeting grounds for political activism and change. Today, they are a mainstream summer staple, all about connecting people through music, fun and good vibes.

We’re having a family-friendly music festival for the young and young at heart here in downtown Cape Girardeau, September 27 & 28, at Ivers Square. Called the Shipyard Music Festival and in its second year, 2019 features two days of music right here in our own backyard with 11 nationally-touring bands from Brooklyn, New York; Raleigh, North Carolina; Nashville, Tennessee; Athens, Georgia; Springfield, Missouri; St. Louis and Cape Girardeau. We’re hoping to see you there.

Because it’s more than a concert. Modern-day music festivals share a few common themes that make them different: most importantly, the atmosphere at a music festival is about building community. There is a professional stage with many bands playing on it over multiple days, all for one price. And the goal is to participate, rather than act as passive receivers: in addition to the music, interactive experiences aimed at building community take place throughout the open-air venue.

This year, you’ll have the chance to learn how to play Black Jack and win prizes with Isle Casino, have a chance to win round-trip tickets to Chicago from United Airlines, listen to acoustic acts on a side stage built by River Radio between main stage sets, take your photo in a giant photo frame built by Drury Hotels, fill up your water bottle all festival long and receive First Aid on-site with Saint Francis Healthcare System, help create a hand-printed letterpress postcard to mail to a friend with Visit Cape, enjoy lawn games and beer gardens with Bud Light, decide which organization will receive up to $2,019 with The Bank of Missouri and enjoy coffee and phone charging at a relaxing oasis built by La Croix Church. The best part? All of these experiences are included free with your Shipyard ticket.

Plus, we’re bringing you for-purchase killer food and drink options available from local favorite eateries, including mary jane, El Sol, Imo’s Pizza and Gabriel’s Food + Wine. As a bonus, kids 10 and under get in free with a ticketed adult, and there will be free, fun activities planned for them throughout the weekend. Perfect for the grandkids.

Tickets are on sale now at shipyardfest.com for $30, and VIP tickets are $100. And if you want to stay in the know on all things Shipyard, including the chance to win giveaways from Shipyard sponsors, sign up for The Scout daily email, an email of good news from the Southeast Missouri area and beyond, at thescout.io.

So why name it the Shipyard Music Festival? We’re glad you asked. A shipyard is a place where disparate parts are brought together to be assembled and sent out into the world more whole, full of connection and purpose. And that’s what the Shipyard Music Festival is all about: bringing people together for music, food, drink and experiences that build community through camaraderie and good cheer.

Last year at the inaugural 2018 Shipyard Music Festival, Reverend Doug Job, transitional minister of Abbey Road Christian Church in Cape Girardeau, volunteered as part of the crew, picking up litter throughout the festival. One of his favorite parts of the day was discovering the band Tow’rs.

“I enjoyed their set a lot, but then afterwards … [two of the Tow’rs musicians] hung out for a while. They were just down in front with the audience, their kid was playing with other kids who had come,” Job recalls. “It was only a community that lasted a day, but it was a community.”

The bottom line: festivals are about bringing people together through music. This is the chance to be a part of creating something new and of big-city caliber, right here in Cape Girardeau. We hope to see you there, September 27 & 28. Let’s Shipyard.

Get ready for fun — Jukebox the Ghost is your Shipyard 2019 co-headliner. The friends from college now based in Brooklyn have played together for more than a decade, bringing their upbeat piano-synth-guitar-drum sounds to lyrics about love and growing older that somehow manage to be a way you’ve never heard it before (but felt all along).

Check them out if you like: Queen, Ben Rector, Lovelytheband

This Nashville-based indie rock band and your Shipyard 2019 co-headliners mix versatile sounds to create something of their own: a little reminiscent of the Beach Boys, a little stripped-down acoustic and a little alternative rock, with lyrical influences from two of the band members’ father, contemporary Christian singer-songwriter Steven Curtis Chapman, running through it all.

Check them out if you like: The Beach Boys, Neon Trees, Jon Foreman

Raised in a blue-collar farming family in North Carolina, BJ Barham writes about rural America, working hard and how you always carry this culture with you, no matter how big or far away the city you move to. This alternative country artist mixes elements of Southern rock, folk, country and Americana to tell stories, sparing nothing in their honesty.

Check them out if you like: Turnpike Troubadours, Koe Wetzel, Jason Isbell

Gospel and contemporary Christian music (CCM) influenced these band members’ early lives: singer-guitarist Jasmine Mullen’s mother is CCM artist Nicole C. Mullen, and the three Fitzgerald siblings who comprise the rest of the band were homeschooled, the children of a preacher. Discovering their own musical influences during their teen years and initially making folk music, this band has settled into their own funk-Motown-rock sound with gospel threads running throughout.

Check them out if you like: Elle King, Alabama Shakes, Lenny Kravitz

If you need a soundtrack for clapping, foot-stamping, all-out dancing in a field at sunset, Animal Years’ EP “Far From Home” might be your solution. The EP gets its nostalgic, wandering sound and lyrics from singer-songwriter Mike McFadden writing the album while on the road, missing home.

Check them out if you like: The Lumineers, Phillip Phillips, Drew Holcomb & The Neighbors

Liz Cooper and the Stampede

Liz Cooper and the Stampede are brash and delicate at the same time. It is these threads woven throughout their music that make them so charming as they share their trance-like psychedelic folk rock that soothes even while it cuts to the truth. Close your eyes. With all its brazenness, groovy-ness and limitless possibility, you just might feel like you’re back in the ‘60s or ‘70s. Open your eyes: you can’t hate a woman in a floral jumpsuit.

Check them out if you like: The Beatles, Phoebe Bridgers, Brandi Carlile

To say this quartet who mixes blues, hillbilly folk and rock’n’roll is wild is not to be ironic. In their performances, lyrics and blend of sounds, it’s hard to tell what’s coming next from this Nashville-based band out for a raging good time.

Check them out if you like: The Rolling Stones, Bob Dylan, Willie Nelson

Check them out if you like: Coldplay, Moon Taxi

These four brothers and one sister from Dawson, Missouri, grew up traveling with their parents as the family folk/bluegrass ensemble Link Union. In 2017, the siblings formed Dawson Hollow, an indie folk rock band in which they write and perform their own music. Banjo and cello, acoustic guitars and a guy playing the drums with a wooden spoon give way to long instrumental breaks and unexpected tempo changes.

Check them out if you like: Tow’rs, Mumford and Sons, The Avett Brothers

Tidal Volume is a self-described “dumb” band who says they play dumb songs and have dumb music videos. Musicians of the “Pun Rock” genre, they come to us from St. Louis. This band is endearingly self-deprecating and very, very punny.

Check them out if you like: Jack’s Mannequin, Ludo, Say Anything

In late 2018 and early 2019, this Cape Girardeau indie rock band’s singles “Waves” and “Holiday” garnered more than 100,000 listens on Spotify. “Waves” appeared on the “CBS This Morning” broadcast and Spotify playlist in January 2019.

Check them out if you like: Young the Giant, Foster the People, Mutemath