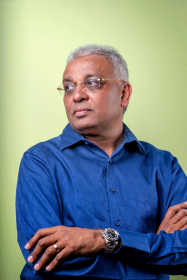 Andy Patel, national franchise owner, came to the United States from India when he was 20 years old with $20. It was money his parents had given him as they saw him off from their small farming community, believing in his dream of making it in America through hard work.

Today, he owns 80 restaurants and manages 4,600 employees across the country. His local endeavors include Dogwood Social House, IHOP, Applebee's and Pizza Hut, as well as being the principal owner of the Cape Catfish Prospect League baseball team. He says his success stems from living by his father's advice: work smart and work hard.

"I came, and I really lived the American dream," Patel says, stating that in 2017 he won the American Dream MVP Award from Franchisee magazine. "My parents said, 'You go work hard, you will make it.' It's a great country to be in, you know?"

After studying science in England, Patel moved to the U.S. where he lived in Florida and began working at Wendy's. He found he loved the restaurant industry, and in 1991, bought his first restaurant, an IHOP.

Six and a half years ago, Patel and his family moved to Cape Girardeau in order to live in a smaller town like the one Patel grew up in. He and his wife, Anissa, now own liquor stores and IHOP, Applebee's and Pizza Hut restaurants in 18 states, including the IHops and Applebee's in this market and the Pizza Huts restaurants in the Houston market. Patel is quick to give credit to Anissa for running the day-to-day operations at IHOP and Applebee's, and the two have won numerous awards -- "too many," Patel says -- including Franchise of the Year twice, Highest-Earning Franchise in the Country twice, Top Sales Increase, Top 25 Operating Pizza Huts multiple times and Biggest Turnaround Player of the Year.

For Patel, it's not only about adding to the number of restaurant franchises he owns, however: in the past few years since moving to Cape, Patel has risked endeavors that improve the quality of life for the community and region. After being approached by the Cape Chamber to create a concept that would provide entertainment for people of all ages and draw visitors from the surrounding region to Cape Girardeau, Patel opened Dogwood Social House at the plaza, a 35,000-square-foot restaurant, bar and venue complete with video arcade, bowling alley, cigar lounge, ax throwing, live music and more. The couple sold their 84 Burger King franchises to focus on this latest project, which Patel says has been so successful he is creating a second one in St. Louis, projected to open in January 2020. Patel also brought the Cape Catfish baseball team, a franchise of the Prospect League, to Cape Girardeau this year for their inaugural season. Patel is clear that owning the baseball team is strictly a community betterment venture: he is donating any profits from the team's first five years back to the city to fund improvements to the stadium at Capaha Park.

After his years of experience in the restaurant business, Patel says it's still the people who draw him to the industry. He says many of the people he's trained have gone on to own their own businesses and restaurants -- often as his competition -- which he says he "loves."

"I like to train people. Hopefully they'll all become a business owner," Patel says. "I have a lot of people who work for me who own more restaurants than I do now. ... I like to teach young kids [how] to own a business ... It's a good journey. I like to see other people's success."

As he continues to grow his businesses, Patel is excited to keep moving forward.

"You see all kinds of people in a restaurant," Patel says. "It's a challenge, but I enjoy everyday still."